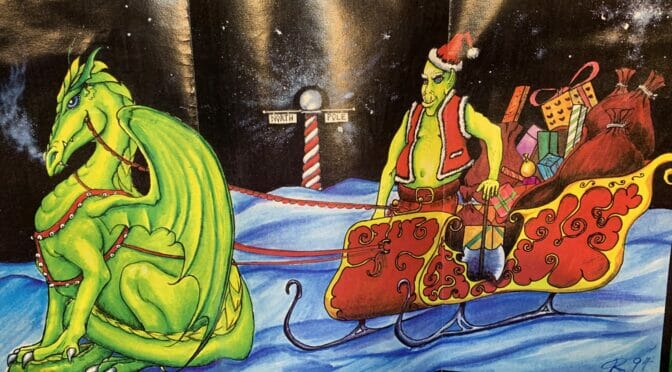 Irene has been sorting through a collection of paper items from the past several decades. Maybe this should have been completed before we moved. But it is surprisingly time consuming, and I don’t blame Irene for deferring it.

A lot of this material is freighted with emotion. Letters from friends and family who have died or who are estranged from us for various reasons. Cards and keepsakes… it is hard to let go of those, but for the most part we must. But we also allow ourselves the luxury of preserving a few such items. Like this hand-made card my friend Chris sent us…

I knew immediately I had to keep this when Irene showed it to me. Chris used some clip art for the more ‘boring’ parts of the card, but the main image is a copy of something he drew himself. That makes it ‘precious’ to me.

Hand made items are hard to dispose of. As are things which trigger strong emotions: and a lot of the time these ‘memory triggers’ are the most mundane of things. A bill from the vet for a beloved pet that is no longer with us; a pamphlet from a long-ago vacation; or an empty tin that once held candies given by someone special.

This week on Hoarders….

As we sift through these items I’m reminded of how easy it would be to simply be frozen at the thought of throwing things out. I’m pretty brutal with my ‘purging’ of old stuff, not because I want to be but because I’m inclined towards holding on- the only way I can progress is to simply jettison things en masse. Irene struggles a bit more than I do: thus the paperwork from the 1990’s.

Each of those items or pieces of paper would have that much more of a hold on me if I was just a little bit more broken than I am. I’ve managed to overcome the grip the small artifacts of life sometimes have on me. Perhaps because I’ve forced myself to: it is no great virtue, just a determination to overcome some of my less rational flaws.

Despite that, I’ll be holding on to this old card Chris sent us. Maybe I’ll even put it in a frame or something…