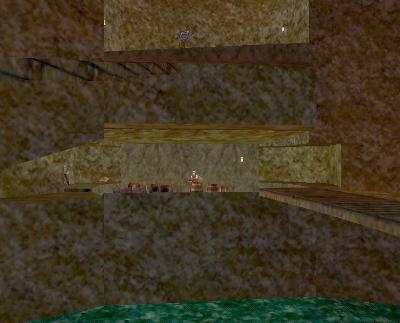 There is a quest, I think called the Brewer’s quest. Basically, you get some casks of Blackburrow stout off of a couple of special Brewer Gnolls, do some stuff, and you get a fancy cloak. I *know* that’s kind of vague, but it isn’t *my* quest. It was Bevarin’s quest, and I just came along for the ride.

I’m the first to admit when someone else makes a mistake. I won’t lie: Bevarin had us camping the wrong spot. Look at the above picture closely if you want to avoid the wrong spot: the little yellow thingy in the middle of the picture is me. That is the wrong spot. But it was fun anyway. 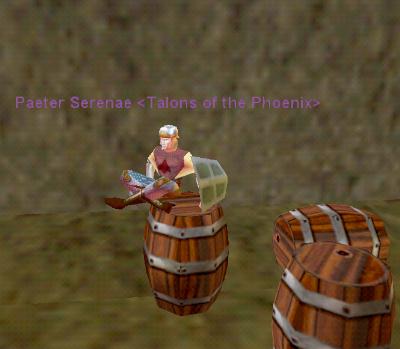 It is funny to come back to Blackburrow. I don’t have any pictures of my formative days there, but Bevarin and I spent most of fifth through twelfth level amongst the Blackburrow Gnolls. Back then it was occasionally scary, sometimes even deadly place. Now, from the lofty heights of our current (Bevarin: 23rd level, Paeter: 28th level) level status, BB is a cake walk. Nothing here can hurt us any more. We are Gods. It is good for the ego after dying two or three times in a row in Guk or Splitpaw… 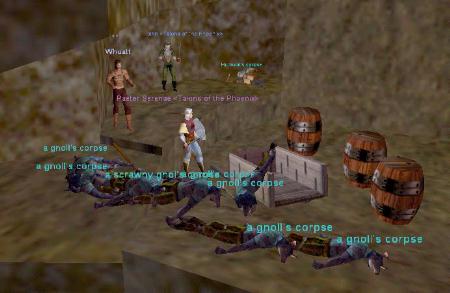 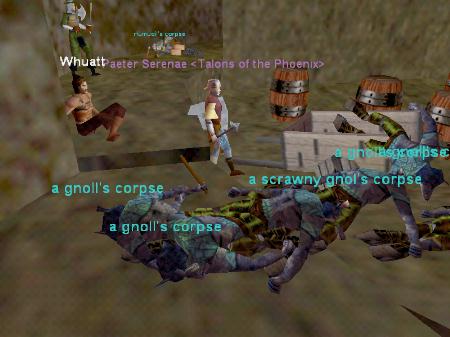 Whuatt, Nihil’s 8th level monk “twink”, showed up in Blackburrow while we were camping. He decided it would be fun to train us. The Gnolls found it less humourous )

Actually, once we realized we were nearly invincible, we told Whuatt to use us to get himself out of any trouble he got into. In the process, we helped him gain some experience. I’m a long way from being able to power-level someone, but I think we did Whuatt some good.

We ended the night (about three hours worth) having found and slain one brewer gnoll, who didn’t have a cask. Several hundred Gnolls (or so it seemed) gave their lives in the vain hope they were placeholders for the Brewers. We figured those darned beer-makers must be a really rare spawn. Truth is, that one brewer we did kill was probably lost: Bevarin found out later (as noted previously) that we were in the wrong spot. D’oh!