A difficult step in joining a new guild may be the requirement of leaving your old guild. Dyri was faced with this difficult task when she decided to join our little band. Friendships don’t end when you change guilds but, like when you move to a new city in real life, the challenges of communications can strain them. It was a big step for Dyri to make this choice. I, for one, am honoured that she felt positively enough about us to choose the Talon Guard as her new home.

And we were all uniformly warmed by Dyri’s presence: voting for her membership was without dissention. Her bardic talents were one part of our happiness in her decision to petition us for membership. But it was more truly the kindness and generosity of spirit which fairly glowed around her that made the decision an easy one. 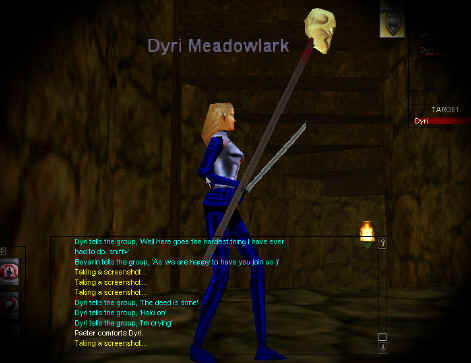 In addition to removing herself from her previous guild, Dyri was also faced with a delay before she could be invited into the Talon Guard. Several days passed during which she had to venture into Norrath without the comfort of guild conversations. I was saddened by this delay, but celebrated the day when she was able to enter into our guild chatter.