Like a lot of computer geeks, I perform regular upgrades on my system. So many upgrades, in fact, that I’ve used the spare parts I have replaced in the last three years to build three other computers. I’m not sure whether that makes me high tech or just stupid- either way, its part of what makes me “me”, and so I keep on doing it. As an avid computer games player, having a fast computer with high performance video is sort of a priority.

This year, I decided to go out on a limb. For the first time ever, I decided to build my main computer with a non-Intel processor. I have had reasonably good success running AMD processors in the dual-AMD Linux server that supports this website, so I had some reasonable confidence in the quality of the technology. But what really got me thinking about AMD was their release of 64 bit processors compatible with 32 bit software. All the benchmarks made this look like a great choice for now, and an even better choice once the new 64 bit OSes and software came out. Thus I began my journey on a new path…

Here is what I was replacing:

My old machine had served my needs admirably as my “main” rig, through a video card upgrade, memory upgrade, OS Upgrade, and addition of a hard disk. Nearly two years, all told. But the latest games were starting to stress the machine out. Frame rates were getting slower, with some really over-the-top scenes turning my once mighty machine into an expensive slideshow.

Credit card firmly in hand, I placed my order for parts. As usual, I had set a “target” budget of $1,500 Canadian (18 cents American), with a worse case value of $2,000. For that price, I hoped to come close to doubling my “old” computer’s performance. I find these figures have worked well for several years: buying parts and doing my own assembly, I can generally build a nearly state of the art machine for this kind of money. And I also find its usually possible to double graphics/games performance every two years. Especially when I am hitting all the “hot spots” (memory, processor, and most importantly video card) in a single upgrade.

With the help of one of my co-workers, a fellow I’m thinking more of as a friend than just the guy sitting next to me (hello, Marlon!), I spec’d out the “right stuff”. Here then is what I ended up with:

The new machine actually incorporates three major technology “shifts” for me. The AMD processor (always Intel before), the SATA hard drive (always IDE before), and the ATI video card (NVidia, and then 3dFX before that- never ATI). But I felt like I had given these different technologies a thorough vetting, observing each for a year or two before making the jump. And so far, its worked out pretty well…

Putting it all together

I have to say that this was one of the easiest computer assembly projects I’ve ever completed. The Antec case was a dream to work with- every part and cable I needed was supplied and well labelled, a complete set of fasteners and screws was provided, and amazingly there was a manual in English (not Engrish)!.

The inside of the Antec case

The Asus K8V Deluxe came with a ton of cables as well: a pair of SATA cables (very spiffy cables, by the way), IDE cables, floppy cables, audio cables…. By the time I was finished, I had a big stack of spare cables, all really good quality.

A digression about SATA and cabling. I knew SATA drives have their own “unique” cabling- in fact, that was one of the reasons I chose SATA technology. The new interface cables are small and easy to route inside a case, making the huge flat IDE cables we all know and love look quaintly cumbersome.

A comparison between IDE and SATA data connectors

But I also discovered that SATA drives have their own unique power connector as well. Thankfully, the 380 watt “QuietPower” power supply in the Antec case includes power connectors for the SATA standard. Further, somewhere in amongst all the cables (I think from that ASUS motherboard) was a SATA to standard power “converter”, and on top of that the Maxtor SATA drive I bought actually supports both power connector types.

The video card was my only real “problem”, and the difficulty had nothing to do with the technology. I was originally going to continue using the Geforce 4 from my old build, but that became too complex once my wife asked me to use spare parts to build her aunt a computer. I needed a spare video card to do that, and so would need to “insert” a new card into my family so that trickle down would result in a spare.

So, I ordered…an ATI 9600XT. I did some more research once I realized that the 9600XT was on backorder for several weeks. I came across the Sapphire: its a third party card using the ATI Radeon chipset, and has received some good reviews. I could get a 9800 Pro (a much faster card) for only about $50 more than the price of the 9600XT…naturally, I changed my order. And guess what? The Sapphire 9800 Pro suddenly went out of stock, just as I placed my order, and ultimately took over three weeks to arrive. Sigh.

But, nearly a month after I started, it was finished…. My total cost came in at about $1,900- higher than I wanted, but then the video card I got was something I expected to upgrade to within a few months anyway, so I guess that’s not too bad.

The Proof is in the Performance

Seat of the pants performance improvements between the old and new configurations were, in my opinion, significant. Notably, several games I was playing (E.G.: Dark Age of Camelot, Unreal Tournament 2003) with some graphical features turned down or off now run faster at higher resolutions with all features set at their maximum values.

Without any optimization, my new machine is running within about 10% of the fastest tested machines listed by PC Gamer magazine (systems that all have the higher performance 9800 XT video card). More important from my personal perspective, I hit my target of doubling (at least) my old computer’s graphics/games performance. Not too shabby… 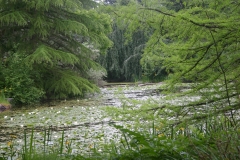