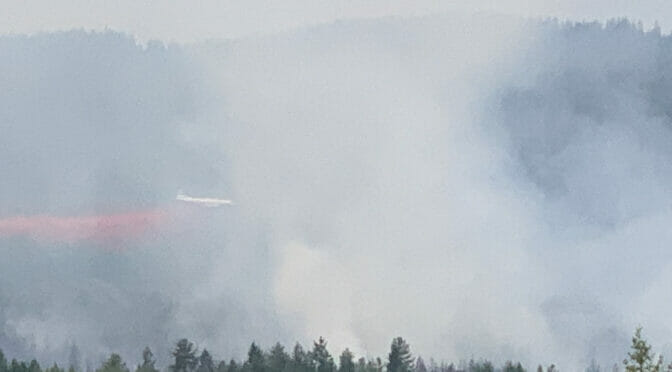 Sometimes smoke really does mean fire. And in our case, it was an ‘interface wildfire’ that came within about a kilometre of our new home on July 1 of 2021.

Is that a fire?

Thursday, July 1- Canada Day. It was supposed to be a busy day, with Irene’s Mom and Cousin Anne departing and my brother Ron and his daughter Sophia arriving. But it turned into a bit of a panic.

Anne asked about some smoke nearby late in the morning: she thought it might be a fire. I initially rejected this notion: there had been smoke before, but Castlegar hadn’t had a fire in ‘decades’ according to people I’d talked to. Anne was right though- the smoke looked suspicious.

And then our neighbours called: Rob said the fire was serious business and an evacuation alert had been given for our subdivision. I took this notice seriously, and we started moving.

I am a high-anxiety person. To keep my emotions in check I need to stay focused- unfortunately, we all had slightly different ideas about what to do first. Everyone agreed that we should get Anne and Celina to the airport for their flight immediately. But I wanted to keep Irene with me, and she wanted to stay behind at the house and get the cats ready to evacuate. I didn’t like it, but that’s what we did.

Celina and Anne were loaded in the truck in record time, and off I went with them to the Castlegar Airport.

My brother Ron arrived at our house with his RV while I was delivering Celina and Anne to the airport. If Irene hadn’t been at home getting the cats ready there would have been no one to explain to Ron what was going on. And the evacuation alert turned into an evacuation order during that one hour span as well. When I got back to the area of our home I was stopped by the police and told to get out immediately. Getting the cats ready meant we could load up and go as soon as I returned home.

And Irene contacted her friends at the place where she boards her horse Spirit- and they opened their doors for our cats and my brother’s RV. This was good news, as the RV park where Ron had booked a spot was also under evacuation orders.

Our evacuation worked out ‘perfectly’ through chance rather than planning. Seven cats, four people (plus two people leaving), an RV, three vehicles…. all relocated in under two hours. Amazing, really.

We were also incredibly fortunate that people we didn’t really know at all extended all sorts of kindness to us. Foremost amongst these were the folks at Irene’s stable: not the stable owners who are her friends (who were also extremely kind), but the residents on the property who let us house our seven cats in the air-conditioned comfort of a room in their home. They also let my brother hook up his RV to power so he could have air conditioning. It was all very heartening.

The ‘official’ designation for the fire that led to our evacuation was the Merry Creek Wildfire. It was apparently human-caused, and grew to just under 20 hectares in size at its peak. Evacuation orders for the City of Castlegar were in place for two full days; we were allowed back to our home a little later on July 3rd.

Irene, our seven cats, and I were completely unharmed. Our house was undamaged by the fire or fire retardant, and the fire didn’t reach any part of our property. Our neighbours suffered some property damage related to the retardant. All in all, a pretty great outcome- many thanks to the firefighters and other emergency response personnel. My truck got a nice coating of fire retardant- I still haven’t cleaned it all off.

I learned that our neighbours are great people: thank you to Rob and Michelle for the early notice. And I discovered that acquaintances and strangers can be extremely generous: tremendous thanks to Roy and Diana for inviting us to their property no questions asked, and to Kyle and Sawyer for opening their house to our cats and their driveway to my brother’s RV.

Looking forward, I think we need to have a better evacuation plan. More cat carriers for one thing. Maybe eventually a trailer of our own that we can load up and get out with quickly. I’ve signed up for the Regional District of Central Kootenay emergency alert system, so perhaps next time I’ll get a notice in advance.

The climate is getting more extreme, not less. We’ve had six weeks of temperatures well above 30 degrees celsius with no rain. These are ‘once in 100,000 years’ conditions, happening year after year. Being uncomfortably hot is one thing, but climate change is going to make all of us into ‘preppers’ to one degree or another just to cope.