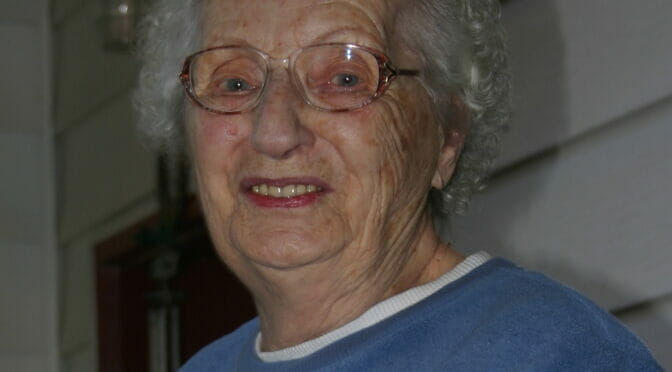 My brothers and sisters, along with a few nieces and nephews, gathered in Chilliwack for several days after Mom’s death. There was no formal memorial. But we had lots of talking, hugging, and meals together. We shared memories and feelings, some painful, some funny, some deeply touching. It was a good way to bond in our sadness, and I wouldn’t have done it any differently.

A bit about Mom

Margaret was born in 1922 in Southern Saskatchewan. Her grand parents had homesteaded there, and her parents had a well-established farm that provided for them during the Great Depression. These were hard years for her.

Mom joined the Armed Forces (CWAC) during World War II. She was eventually deployed to London around 1941, where she served as an office manager organizing and delivering payroll to the soldiers. She told me about the ‘buzz bombs’ and how a friend of hers died in an attack. One story was about delivering payroll to France at night in a blacked out plane. Another was about using the pointy end of her tail comb to poke the eye of a soldier peering through the cracks into the women’s showers.

Mom stayed in London during the post-war wind up, where she met the man who would be her first husband. I’m not clear on whether they married before or immediately after they discharged in late 1945/early 1946, but they returned to Canada and settled in Brandon. There my eldest two sisters and brother were born.

Mom’s first marriage didn’t last: her husband was a heavy drinker and became abusive. Possibly it was PTSD as he had served in combat, but they didn’t have that phrase back then. They divorced in the early 1950’s, and Mom returned to Saskatchewan. She married her second husband there, and they resettled in Edmonton.

Mom’s second husband fathered my two brothers and myself- I’m the baby of the family, with six years between myself and my nearest brother Ron. Dad had a fairly severe stroke when I was four years old: I never really knew him at all. Mom raised her three youngest, ranging in age at the time from about 12 to 4, by herself.

Mom worked hard and sacrificed for others most of her life. I think she had most of the ‘softness’ ground out of her by some of the challenges she faced, but it was always clear that she loved and supported us in every way she could. I think she finally got the chance to relax and be herself a bit more after she retired and moved to the lower mainland in the 1990’s.

I was fortunate to have had Mom as my single parent, and I as her sole ‘at home’ child, for a number of years. Despite this I never got to truly know her as well as I would have liked. We talked a lot, but not the ‘adult’ kinds of talks about what her marriages were like, how her childhood during the depression was, and what led her to decide to join the military and serve in a war zone. I miss her every day: I’ve especially missed her these last few years as disease took her memories and voice. COVID made this especially difficult, taking away the only communication that was left between us- touch.

I’m attaching a gallery of pictures with memories of Mom. Many of these were kindly given to me by my sister Connie. I plan on adding more as I come across them in the future.