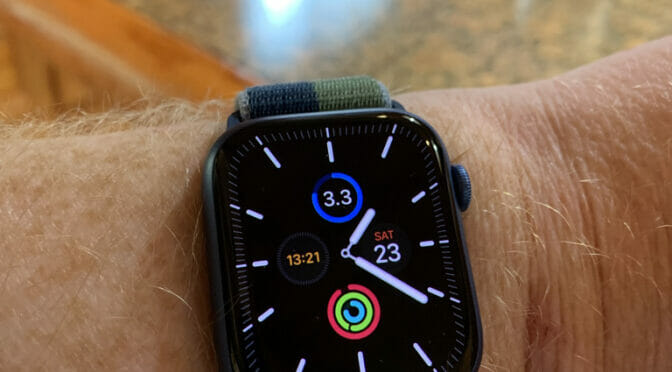 I ordered the 45mm (large) watch with GPS- blue aluminum with blue and green sport loop. The gallery above shows the various bits and the usual “Apple Origami’ packaging. The watch is fairly light for its size. The crystal is slightly curved at the edges and thicker in the middle which supposedly adds more strength.

The display itself is stunning: extremely clear and amazingly high resolution. It is always on although it stops animating and dims significantly when not being used, and has the appearance of extending ‘beyond’ the edges. Its size is significant as well: it allows a lot of information and ‘widgets’ (complications in Apple Watch speak) to be shown while still being readable.

Talking about size: I got the larger 45 mm model. I was a bit concerned about how this would fit on my wrist, which is about 7.5″ around at the point where the watch fits. It is not as ‘gigantic’ as I expected: I have a Casio watch which is somewhat similar in size and shape to some Tag Hauer and Breitling watches, and it is less ‘imposing’ than that. It is comfortable for me, but this is going to be a personal choice. If your wrist is smaller than mine you might want to look at the smaller (41 mm) version. Or go to an Apple store and see if either size feels right for you.

Living with the Apple Watch

The Apple Watch, although quite capable on its own, is really a companion piece for the iPhone. If you have an Android phone, you should probably at least consider sticking with the Google platform. This ‘linkage’ between the phone and the watch is evident as soon as you start setting it up. I can’t actually see how you would fully complete the installation if you didn’t have an iPhone.

Once it is up and operational, the Apple Watch works a lot like an iPhone with a small screen: touches and swipes are consistent with your muscle memory. But there are some additions: the crown makes it easier to scroll through options, there is an extra button that brings up your ‘favourites’ and such, and two little mechanical buttons on the back are used to release the band if you want to swap it out.

The display is, as I mentioned earlier, beautiful. It is also somewhat ‘magic’: its ability to detect when I hold the watch up to look at it is almost perfect- the screen undims and starts animating seamlessly. It also notices when I’m not paying attention with surprising consistency. This ‘magic’ extends to how the watch works with Siri: you can enable a mode that senses when you hold the watch up near your mouth to automatically activate Siri, and it works quite well. Not as perfectly as the screen activation, but close. I use it quite reliably to check the weather when Irene asks me that sometimes-irritating question.

The Apple watch sits comfortably on my wrist as I mentioned in the ‘unboxing’ section. And the woven material of the sport band is reasonably comfortable, easy to adjust, and seems to hold the watch positioned firmly enough without causing irritation.

The face of the Apple watch is extremely customizable: there are dozens of different faces available, ranging from the ‘classic and simple’ to the ‘information overload’ level. And each face has several locations where complications can be placed. The Meridian face I’m using currently supports four complications: I have my step count, date and month, health ‘circles’, and digital time complications active currently. I’ll experiment with other display options later- maybe Mickey Mouse?

Apple has been quietly building out a strong health data ‘ecosystem’ for a number of years. This starts with the rather ‘on the nose’ Health app on the iPhone. This app collects and integrates data from many sources: the iPhone itself, Apple and third party devices, and even governments or hospital organizations that choose to join in.

I’ve looked at Apple Health before: the number of things that can be tracked is staggering, but it wasn’t particularly exciting with somewhat limited ‘live’ input from the iPhone alone. But the Health app comes alive now that I’m wearing the Apple Watch: heart rate, recovery time, blood oxygen, ECG, and a ton of ‘derived’ values like gait steadiness, stride length, standing time, heart rate variability, cardiovascular fitness (VO2 max), stair climbing speed… it goes on.

Getting a regular walk into my schedule isn’t just about weight, it is about feeling better and being more healthy. But I’ve found that it is easy to let things slide because progress is often hard to detect. Tracking these details over time is potentially transformative. Gait steadiness and cardio fitness are two I’m really wanting to keep an eye on.

The Apple Watch has made me pretty happy so far. But it isn’t perfect: there are some things that my old Fitbit Charge HR does better in its simplicity.

Battery life is the big one. The Fitbit Charge HR is a ‘charge once a week’ device. Even after five years a charge was still lasting for three or four days pretty consistently. The Apple Watch, on the other hand, is a ‘charge every night’ device: I’m observing that I have about 30% charge left at the end of a day.

That charging requirement isn’t intrusive: it takes about 30 minutes to charge to 80% with a 20W+ power adapter, and the magnetic charger puck works well. But it feeds into the second ‘gotcha’: sleep tracking.

The need to charge the Apple Watch daily mean that it isn’t ideal for sleep tracking. And the Fitbit also calculates a few ‘sleep quality’ statistics which are not tracked by the Apple Watch. To be honest, this was a small loss for me as I have a CPAP machine that tracks enough of my sleep data to satisfy that data element. But you might want to give this some thought if sleep data is high on your list. I suspect there are sleep quality apps for the Apple Watch that could scratch this itch, but working around the more frequent change cycles would make nightly sleep data collection a challenge.

One oddity of the Apple watch is that it largely ‘hides’ the most significant statistic that Fitbit devices track: step count. Apple places ‘Move’ (active calories), ‘Exericise’ (minutes performing activity), and ‘Stand’ (hours with at least one minute of standing activity) at the centre of their health tracking. “Closing the ring” for each of these means filling in a circle based on a daily goal you set for each: these three rings are shown by default on many of the provided watch faces.

Steps, however, are not visible without digging down further into the health app. It is possible to add a complication that will show steps on the watch’s display, but as this is a third-party widget it only updates every 15 minutes or so.

The biggest gotcha for some people may be the fact that the Apple Watch has vastly more functionality than a ‘simple’ health tracker like the Fitbit Charge HR. That is great for some, terrible for others. All these capabilities could become a distraction bordering on addiction for some people. I haven’t found the watch to be distracting, although I’m definitely using Siri a bit more because holding my wrist up to my face is an easier/faster way to activate it than getting my phone out.

The Apple Watch 7 has pleased me so far. I am happier with it than I expected to be, and it is an improvement over my Fitbit Charge HR regarding the health metrics I care most about. I’ll have to see how much the data it provides ‘motivates’ me over time. If nothing else I’ll have a running tally of my rapid decline back into the dust from which I came.

2 thoughts on “Apple Watch 7: On being Quantified” 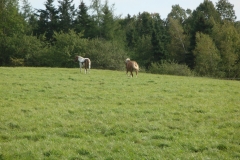