Two weeks ago I purchased and started using a Fitbit Flex.  It is basically a set of accelerometers, some computing, and a Bluetooth wireless connection bundled into something you can wear on your wrist.  This little gadget won’t turn me into an athlete, but I’m hoping it might make me a little more aware of my astounding lack of activity.  And in the process, possibly shame me into moving a bit. 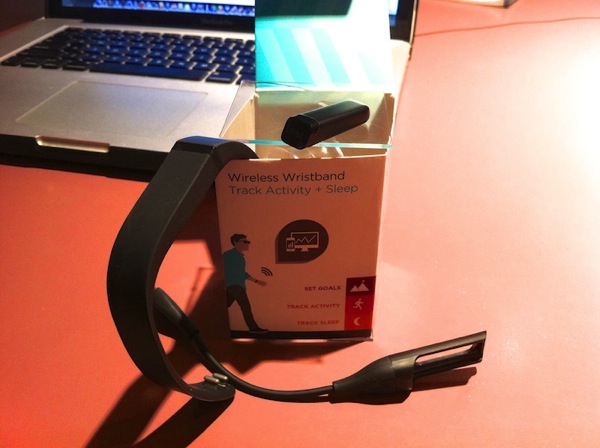 The Flex comes with the tiny little electronics unit,  a large and medium silicone band, a USB cord to plug the electronics in to charge, and a compact USB “dongle” for your computer.  The dongle allows you to wirelessly sync the Flex every twenty minutes when it is in range of your computer: about 20 feet.   If you have a supported smart phone, which basically means a newer model Android or iPhone 4s or later equipped with Bluetooth 4, you can sync with that.   Either way, you need to install an app on either your computer or your smart phone.

There really isn’t a lot to the Flex from a user perspective.  There are no external controls, and the display is limited to five little LED dots and isn’t normally even visible.  Controls are limited to “tapping” the device sharply.  Note that this is not a touch device: it is measuring motion only, and sharp taps are just a motion that it uses to display or change behaviour.  Two taps causes the Flex to display your current status towards the one goal you’ve told it to measure.  By default, this is steps: one illuminated LED dot indicates 20% of your goal.

If you achieve your goal for the day, the Flex will vibrate and flash its lights briefly in celebration.  You can also tap the Flex rapidly for several seconds (no specific count of taps) and it will toggle in/out of “sleep” mode.  This basically tells the Flex to start or stop assuming you are sleeping.  Once you put the Flex in “sleep” mode, your movements will be considered “disturbed sleep”.  A lot of movement equates to “waking up”.  This then drives the measurements of sleep quality displayed on the Fitbit dashboard.

Charging of the Fitbit Flex electronics is required about once every five or six days.  You simply remove the electronics module from the band, plug it in to the USB adapter, and plug it in to a USB port.  It takes a couple of hours to charge from “flat” to full when plugged in to my Macbook.  The electronics are water resistant:  you can wear the device 24 hours a day, when you wash your hands, even in the shower.  However, it isn’t really designed for long-term submersion: it should be removed when swimming, particularly if you are diving or going more than 10m (30 feet) below the surface.

It is important to understand just how limited this device is.  It doesn’t measure heart rate, blood pressure, or sweat.  Flex does one thing, really: it measures movement.  So if you wave your arms around endlessly during the day,  perform strenuous activities that involve little or no arm movement, or remove your Flex entirely from your body and put it on some kind of vibrating device, then it won’t accurately measure activity.  If you are a serious athlete looking for detailed scientific data for your training plan, or if you just need to know exactly how many steps/miles you walked at what metabolic rate, then you probably need something more sophisticated than the Fitbit.

However, if you are just trying to generate comparative activity measures without a lot of hassle, it is great.  Do you want to know whether you moved more today than yesterday, or more this month versus last month?  The Flex will help you, with the minimum amount of set up or attention.  Note that this applies to the other Fitbit activity trackers: they are all intended more for simplicity than detail or precision.

The data the Flex sends when it syncs updates your activity progress data on the Fitbit web account you set up.  The website is where all the fun happens: it is where you can view your progress, add manually logged data like what food you eat, and correlate your data with other Fitbit products like the Fitbit Aria scale.

When you set up your Fitbit account, you provide some basic personal data like your gender, age, current weight, and perceived activity levels.  This gives the web application a starting place, but from that point supposedly the actual data from the Flex starts to come into play.

I upgraded my account to Fitbit Premium for $50 a year, which adds the Trainer functionality plus a bunch of extra analysis/graphs to the “free” version.  Given that I’m trying to motivate myself, and that I am often motivated by technology/blinken lights, this seemed like a wise extra investment.  For example, the extra stats in Fitbit Premium include Benchmark, which tells me that I’m about as active as an obese 65 year old woman- if that doesn’t motivate me, I don’t know what will. 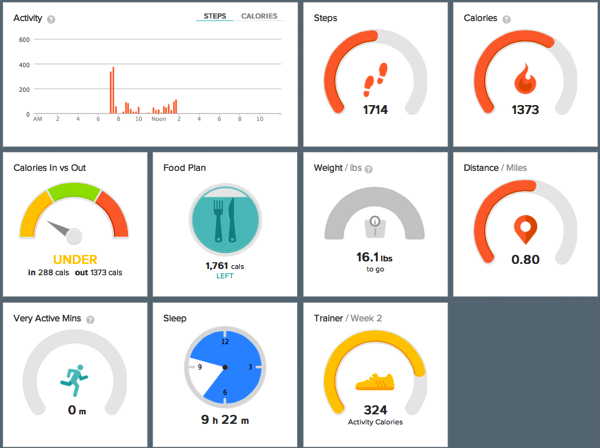 You can add or remove the little “widgets”- for example, I’ve turned off the social widget since I’m not currently tracking my progress against other people.  For most of the widgets you can set a goal: my daily steps goal, for example, is 3500 steps, and I’m aiming for a stunning 1.5 miles of distance per day.  Given that the “healthy” target is 10,000 steps per day, I obviously have a long ways to go.

I’ve also set a target weight of 190 pounds over six months (down from my current 205ish) using the “Trainer” widget.  That causes the Trainer to set a goal for activity calories burned each day.  In theory, if I hit that goal and don’t eat beyond my daily Food plan target, I’ll be able to achieve my weight goal by sometime in March/April.  We shall see….

Very Active Minutes is measured compared to your normal activity level.  Once you’ve amassed some data from your Fitbit device, “very active” for you might be substantially different than “very active” for me.  For me, “very active” seems to currently be “stood up and walked, possibly a bit up and down hills”.  For someone who moves a lot, it would probably take some serious running or bouncing around to count as “very active”.

Fitbit Flex also has a measure of sleep.  You tap the device rapidly for a couple of seconds to switch modes when you got to sleep and when you wake up.  In between, it uses your motion to determine roughly how sound your sleep is.  This is a very rough measure, but is better than no tracking at all.  And if you are like me, when you forget to properly activate “sleep” mode, you can also use the web app to correct or add your period of sleep.

The Fitbit experience includes “awards” for achieving certain milestones.  An example is the award I got the other day for having moved the equivalent of 5,000 steps in one day: there are others for miles walked and, if you have the Aria scale, for hitting weight targets.  These awards or badges can be displayed in your dashboard, and you can compare with friends who permit you to.  I don’t know how motivating these awards will be for myself, especially since they seem to be oriented towards people who are a lot more active than me.  At my level of activity, I might get one award a month, which isn’t likely often enough for me to even notice.

It is probably worth mentioning the “social” aspect of Fitbit tracking.  There, I’ve mentioned it.  Unfortunately (?), I don’t have any friends using Fitbit, so I don’t have anyone to compare to / compete against.  I’ll eventually be comparing against my wife since she has ordered her own Fitbit (a Fitbit One).  However, I don’t think that really counts: I already know that Irene is far more active than me and in better shape.  But I could end up being surprised.  I am also doubtful as to whether I would find competing against other people for activity level or weight loss to be particularly motivating.  Instead, I suspect I’d just find it depressing.   I suppose it is for this reason that the Fitbit site has privacy settings that let you control what your friends see.  In addition to comparing yourself to friends who use Fitbit, you can also post your stats to Facebook or Twitter.   I don’t think I’ll be doing much of that either.

Note that you can track your weight and food manually.  But you can add even more gadgets to your activity plan by acquiring the Fitbit Aria WIFI enabled scale… and yes I did that.  The scale just arrived today: I’ll report on it once I’ve had it for a couple of weeks.

Fitbit Flex is a pretty slick device to track comparative activity level at a “good enough” degree of accuracy.  Most of its value comes from the web application or smartphone app, and the way this allows you to correlate data.  The fact that a combination of devices and manual data entry can be used to link weight/BF%, food / calorie intake, and activity level with a minimum of “friction” is interesting and somewhat unique.

Personally, I’m enjoying being more aware of my activity level.  I don’t know whether it will encourage a significant or lasting change in my lifestyle.  But I suspect it will permit me to make a gradual kind of shift that might “stick” a bit better than the large changes I’ve tried in previous years.  Those rapid changes were effective only in the short term: but I’ve never been able to keep at it beyond an initial three to six month period.  I’ve wondered if, perhaps, some of that lack of long-term change is a result of the behaviour shift being simply too radical for me to maintain.  But I’ve never been able to see any value in “gradual” changes, since the cause (extra activity and better eating) is temporally so disconnected from the effect (better health / weight loss).