Earlier this week I was relaxing in the back yard reading a book.  It was about 6:00 PM, and was starting to cool down after reaching 25 degrees Celsius or thereabouts.  I heard a rustling sound in the vines and some odd “chuff” noises from the corner of our gazebo.  I looked in the direction of the sound, and saw Mama Raccoon hanging upside down and peering at me.

She uttered a few more odd sounds (I am not a raccoon person, but they do make funny noises) and sort of drew her self back up into the branches of the overhanging vines.  At this point, I was perhaps 15 feet away from her.  I heard some more rustling in the vines over the gazebo, and then the crows that hang out in our trees started scolding loudly.  I assumed they had just noticed the Mama raccoon…

As I sat there, watching in the direction I had last observed the Mama raccoon, I heard some more chirrups and chuffs coming from a slightly different part of the gazebo.  The vines rustled more vigorously, and then suddenly three baby raccoons, formed up single file, came waddling along the deck.

They chirruped several times each as they made their way around the deck, coming right past me: barely three feet away.  They didn’t run, or stare at me: they just waddled past and into a gap underneath our deck, one by one.  Each of the babies was an odd combination of adult and baby features: a big head, but a very small fluffy body, and a stubby tail.

A few moments later, Mama raccoon re-appeared in the same spot as previously, hanging down and making odd noises again.  I decided to get out of her way in case she felt she needed to go to exactly the same place as the babies- I slowly gathered my things up and went back into the house.  As it turned out, Mama raccoon had a different entrance on the other side of the deck that she used.

I saw the Mama a couple more times that day.  I’m finding it odd how active the ‘coons are during the daytime.  I *thought* they were supposed to be more nocturnal, and maybe they are more active at night, but they are certainly making appearances during the day.  According to one useful website I found, nursing mother raccoons will go out more often during the day, and raccoons in general are not purely nocturnal.  No need for infrared cameras then, I guess! 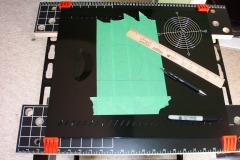