Electronic books, or “e-books”, are coming.  Some would say they are already here, with several major releases such as the Sony Reader and iRex iLiad over the last year or so.

What is the big deal?  Haven’t we been able to read books on computers or electronic devices for years?  Yes, but try reading pages upon pages of text on a glowing computer display for hours and hours: your eyes will suffer.  LCD displays without backlighting have viewability and resolution limitations.  Most of the attempts at electronic books until the last year or so have lacked a great deal of the convenience and eye-friendly readability of the paper alternative.  That is, until the development of e-Ink.

E-Ink or “electronic paper” is a totally different kind of display technology that is far more like the paper it is attempting to replace than anything that has come before.  I’ve been watching the various e-Ink based devices for some time now, and made the leap a couple of weeks ago: I ordered an iRex iLiad.  I’ve had it for just over a week now.

So what is it like?  Is it worth the price I paid?  Read on…

The iLiad has the largest currently available e-Ink display: 124 x 154 mm, or about 8 inches in its maximum dimension.  It is also the highest resolution, at 160 dots per inch, and has the largest number of gray scales (16 levels).    Unlike the other e-Ink based devices currently shipping, the iLiad also has pen input: you can draw or “write” (no handwriting recognition) anywhere on the screen, or use the stylus for choosing options from menus.  The input is via the well-regarded Wacom pen/sensor technology. 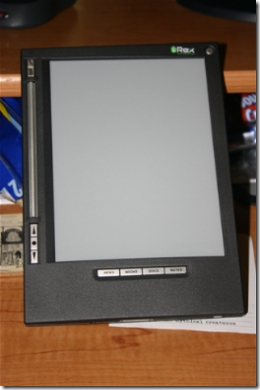 The iLiad further has both wireless and wired networking, and a nearly complete selection of memory interface options.  It supports USB memory, secure digital, and compact flash (CF) memory.  The underlying operating system is a form of Linux, which means that device support is drawn from a large base of open source options.  It also means that the iLiad can conceivable be “hacked” (in the good way) by the Linux community to add features or correct problems in the future. 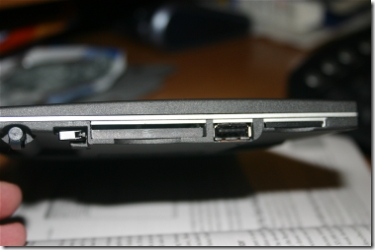 Weight and dimension wise, the iLiad is almost perfect: light (389 grams) and barely 16 mm thick.  The display could be a bit larger (I like space!), but as the largest currently available it will have to do.  The pen input works great, and I’ve used it as a notepad several times without complaint.

Content support is very good.  HTML and text files (of course) are supported, as are standard (un-protected) PDF files.  iRex recently reached an agreement with MobiPocket, one of the larger distributors of “copyprotected” books, so literally tens of thousands of commercial/purchasable books are now available.

The display is drop dead gorgeous: perfect for my eyes, readable in any light that a book could be read in, viewable from nearly as many angles as a sheet of paper- fantastic!  Responsiveness of the device in generally is pretty good (see cons for some issues).  It is very important to note, however, that e-Ink is *not* a general purpose display technology.  The refresh rate for e-Ink based displays is glacially slow- a third or half of a second to redraw is typical.  This is perfectly acceptable for books, but means that e-Ink will not support things like video or highly interactive graphical user interfaces. 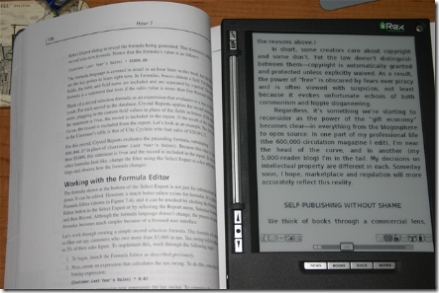 Power management in the iLiad is non-existent.  Left on, the iLiad will draw its rechargeable battery from full to empty in less than 10 hours.  The e-Ink technology has the potential to permit extraordinary battery life: it only draws current when it changes, meaning some e-Books with proper power management are claiming operational time measured in page turns (E.G.: 10,000 page turns), not hours or minutes.  iRex, however, has seen fit to chuck this advantage out the window: the iLiad runs its electronics full tilt at all times, even if the device is doing absolutely nothing.  Upcoming operating system upgrades are expected to improve battery life substantially, but this is a poor showing out of the gate.

This power hunger is complicated by the fact that the iLiad is far from “Instant on”.  When you power it down, it truly shuts down: turning it on invokes a boot process that takes about 20-30 seconds.  As with battery life, this has been improved through several OS updates- however, it will never be “instant”.

There isn’t currently much to use the network connectivity for, at least not that I’ve been able to identify.  It’s main purpose seems to be to permit easy updates/upgrades.  The iLiad has no web browser, email, or similar “productivity” apps that would benefit from network connectivity.  I guess the other purpose is to allow you to connect to your home PC via WIFI, but…I’m not really sure what the value there is.

There is currently one shortcoming in terms of content.  Protected (DRM/licensed) PDF files are not usable with the iLiad.  It is using an open-source PDF reader and, unless they work out a licensing agreement with Adobe, commercial books in PDF format will not be usable on the iLiad.  I wouldn’t say this is a problem: MobiPocket is a good alternative and seems to have a strong share of the commercial e-Book marketplace.

I’ve had some problems with memory devices in the iLiad.  I bought an 8 GB Compact Flash card (PYN brand) for my reader, and it works…about 50% of the time.  The remainder of the time, the iLiad pretends it doesn’t exist.  When this happens, the only way to correct it seems to be to reboot the iLiad…sometimes two or three times before it figures out the CF card is there.

And of course, there is the price.  The iLiad is about $750, about twice the price of the Sony Reader.  But it has a larger display, pen based input, wireless and wired networking…generally, you get what you pay for.

I am very happy with my iLiad purchase.  I’ve read several books on it already (including Dostoevsky’s Crime and Punishment), used it during a two day conference to capture notes, and generally have been enjoying it.  The shortcomings I’ve noted are frustrating at times, particularly the power management issues, and may be too much for some folks.   But for myself, they aren’t showstoppers, they aren’t even particularly disappointing.  They are typical for new technology in its “infancy”, and I was honestly prepared for worse.

I’m totally sold on the e-Ink display technology: it is truly fantastic.  The large format display is not something I’d trade: in fact, if I could I’d make it bigger, maybe 10 inches.  And the ability to “write” on the device is surprisingly useful, even in the total absence of handwriting recognition within the device itself.  There are third party programs that run on a PC, will read the written scribbles and convert them into normal ASCII text, but thus far I haven’t felt the need to try them out.  Instead, I flip back to my scribbly notes to reference while I prepare typed documents on my PC: exactly what I do with my paper note pad, but without the mess and bother of paper.