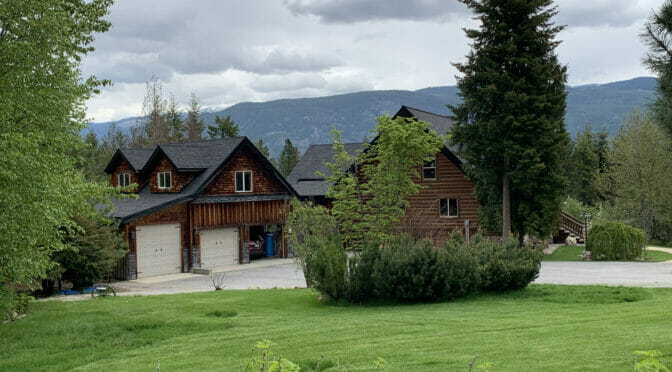 I had planned on posting something new about our stairway construction by now, an upgrade that was already delayed from 2021. Unfortunately that still isn’t done despite being ‘in progress’ since the beginning of May.

Instead, I’ve decided to post some pictures from around the house and a few words about how the year has gone. Most of the pictures have already made an appearance on Facebook- apologies for folks who follow me there as well. But the words are mostly ‘new’…

Our spring in 2022 was a long, drawn out affair here near Castlegar. I’d say it was about a month ‘behind’ 2021. The snow hung around until April, and the fireplace was still a comfort on cold nights almost until May.

This late spring, however, was in some ways a blessing. 2021 was too hot too soon: the Merry Creek fire last year was one outcome. It was somewhat of a relief to have more moisture and lower temperatures until almost June.

The cooler and wetter weather had some downsides, though. The contractor working our stairs didn’t start until the beginning of May. Tradeoffs…

I didn’t actually feel like summer had ‘arrived’ until late June. May and June were wet months, with only the occasionally day with more than a couple of sunny hours. Daily temperatures rarely got above 20 for a high.

But I won’t complain: we made it to July 1 without any threat of forest fire in the area. And the land seems ‘healthier’ this year versus 2021. The greens are more vibrant, I see more flowers and butterflies. And as July starts off the warmth is definitely arriving. We’ve had a week now of sunny +25 or warmer days.

Irene’s Mom Celina visited in June for a week or so. Construction of our replacement stairs continued at a slow pace due to weather and supply chain issues. I got out on only my second motorcycle ride of the year during the last week of June.