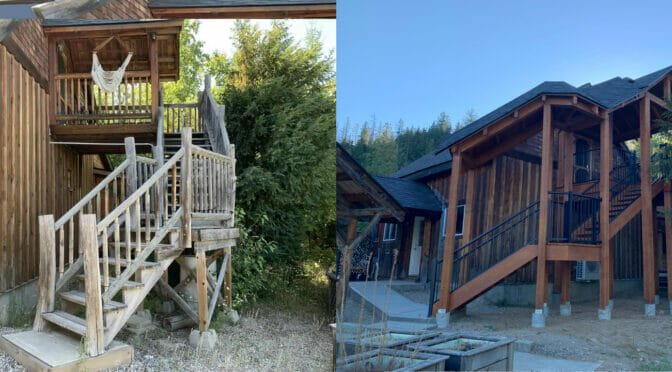 Irene and I had several ‘priorities’ regarding maintaining our new home from the day we bought it. Some were ‘mandatory’: for example, we had to replace the aging but still fully functional hot water tank in order to get house insurance. Others were ‘urgent’, and at the top of that list was the outdoors stairway to my office above the garage.

The house we picked when looking at properties in the Kootenays was an easy ‘winner’. But that doesn’t mean it was or is perfect. Both Irene and I noticed how ‘wobbly’ and worn the outdoor stairs to the suite were. The real estate agent commented on it as well, as did the home inspector. The whole structure shook, wobbled, and shuddered each time someone went up and down the stairs. I was pretty sure they would need to be replaced rather than just ‘fixed up’.

I examined the stairs after we moved in and found all sorts of short comings. The most prominent of these was fundamental: the stairs were not structurally sound. Six bolts attached the upper deck to the house, and it was supported by posts that were ‘floating’ on deck blocks set on the surface. The use of surface floating deck blocks continued with the stairs themselves- they had no foundation at all. No amount of wood replacement or staining could fix this.

The wood itself was extremely weathered as it was completely exposed to the elements. Very little of the wood was ‘salvageable’ for any structural use.

I found a contractor (PNT Contracting) in the early fall of 2021 and explained what I wanted. The new stairs should be structurally sound and ‘solid’ / robust. They should be covered to reduce weathering and minimize the amount of work to clear them when the snow falls. And they should look ‘consistent’ with the rest of the wood structure i.e.: use large, chunky pieces of wood on most elements.

They were unable to start and complete when I wanted i.e.: before the snow fell for the winter of 2021. In retrospect, it is a really good thing that they didn’t start that fall.

The work started in May of 2022 and took until the end of August, and during much of the time there was no way to get to my office. If this had started in fall of 2021 I would have been ‘stuck’, and more unhappy with the delay than I was with the spring start.

The number and variety of delays was … impressive. A few examples:

We ‘complicated’ things by asking for additional work when the construction started. In particular, we had the old pool and accompanying deck demolished and a sidewalk added between the stairs and the garage side door.

There were other challenges, mostly coming down to the structure itself being more complicated to build than originally expected. The master carpenter originally relished the challenge of all the roof angles- but by the end they said the never wanted to work on another roof like this again.

After: solid and roofed

The final result of the stair replacement was very satisfying. The stairs look, feel, and are solid: no longer wobbling precariously on ‘floating’ footings, but anchored firmly to the stone of the mountain itself. I’m pleased with how the roof turned out- it is higher than I expected which may mean it provides less protection from winter snow than I was hoping. The first winter will answer that question, though.

Some ‘mid-construction’ choices the contractor and I talked through like the stair treads themselves were ‘expensive’ but I feel we made the right calls. The stain colour and wood-grain-revealing transparency turned out well in my opinion. My hope was that it would closely match the ‘weathered’ surface of the garage and I think the painter succeeded.

Our back yard is clear now and seems much larger now that the old pool and its related deck are gone. We will have to decide how to landscape this new open area, but that is a project for the future.

I completed a couple of smaller ‘do it yourself’ projects while the stairs were being built. These weren’t major or as important as the stairs, but I’m happy to get them done.

And I re-finished an old decorative wagon from our front yard. It needs a new set of wheels and actual axles.