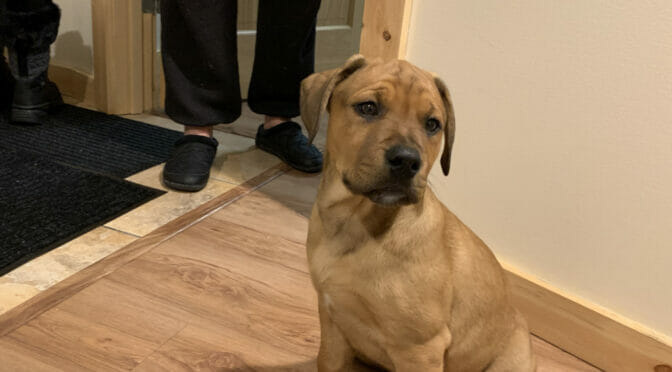 Say hello to our newest family member: Finn, a dog, or more accurately a puppy. This picture is from when we first got him: he was about 11 weeks old at the time.

Finn is a Bull Mastiff + Labrador cross: a ‘Mastador’ in the weird parlance that brought us ‘Labradoodles’. Finn was born on August 29, and is the result of an unplanned breeding between a purebred female Bull Mastiff and a purebred male Labrador. He was an accidental puppy: accidental breeding, and ‘accidental’ to us as we originally had no plan to adopt a ‘baby’ dog.

Finn’s name comes from Finn McCool aka Fionn mac Cumhaill– an Irish mythological hero / anti-hero who went on all sorts of adventures with his two dogs Bran and Sceólang. The name ‘Finn’ / Fionn itself has meanings like bright, white, fair, handsome, blessed, etc. I thought it sounded ‘right’ for this light brown puppy, and hoped he might grow into it.

A puppy?! What were we thinking?

Raising a puppy is something I barely remember from when I was a kid. I had no idea what I was doing then, and have no idea now. So our plan was to settle in here in the Kootenays, get our yard set up with a fenced in area etc., and adopt a dog that was past the puppy stage. A year or two old with some basic training: that is manageable.

Instead, we got a puppy. This was not planned: Irene knew some folks who had Finn and couldn’t manage their lives around him- they have kids of their own, and adding a puppy to the mix was just too much. And boy howdy, after a few weeks of living with Finn I can certainly see how that would be true. It should be said that Finn is really and truly Irene’s dog: I was very skeptical about the amount of time and work it would take to raise him, but… if Irene takes on the bulk of the work, I’ll manage.

Finn, like all puppies, is rambunctious at times. By the standards of ‘puppy’ behaviour, he’s pretty good: he sleeps through the night pretty well, is very trainable, and can be motivated to learn with treats. Finn is reasonably comfortable with ‘crate training’ and will calm down if placed in his crate or play-pen. He gets along quite well with the cats: he isn’t aggressive at all with them, but he definitely wants to play. The cats are pretty skeptical of Finn, though, so there isn’t much ‘bonding’ going on there.

But Finn is mouthy (‘piranha puppy’) and bouncy at times. He needs a lot of attention. Finn gets let outside pretty much hourly during the day, and leaving him alone in his crate for more than an hour or so is ill-advised. He is big and strong enough to cause a lot of damage, and absolutely destroys things like soft, fluffy dog beds.

I think Finn will grow into a pretty good dog. Irene and I will undoubtedly mess some things up. We are taking a ‘Puppy’ course- it is online currently, and our progress is spotty at best. But we will work with him, and I expect Finn will turn out okay. Mostly because Finn is surprisingly calm and well-behaved by nature, I expect- not because Irene or I have any particular ‘talent’ at raising puppies.

But there is no doubt that making it past the puppy months be a challenge!

One thought on “An unexpected puppy- Finn”