It took a bit longer than planned due to some delays with the arrival of the composite decking material, but now our deck surface is complete! 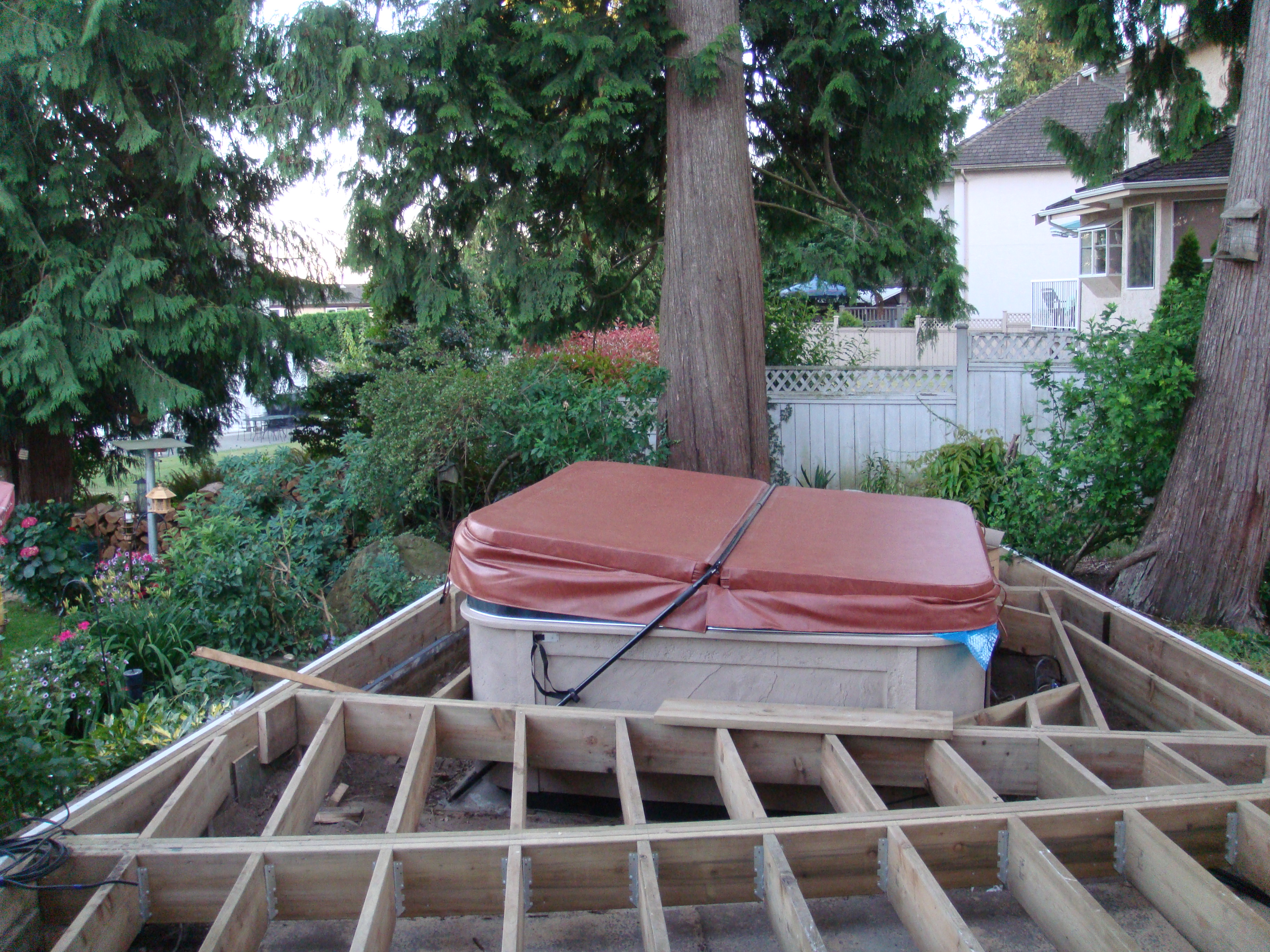 That’s looking south: here is the same perspective with the deck materials installed:

And here is a view looking East: 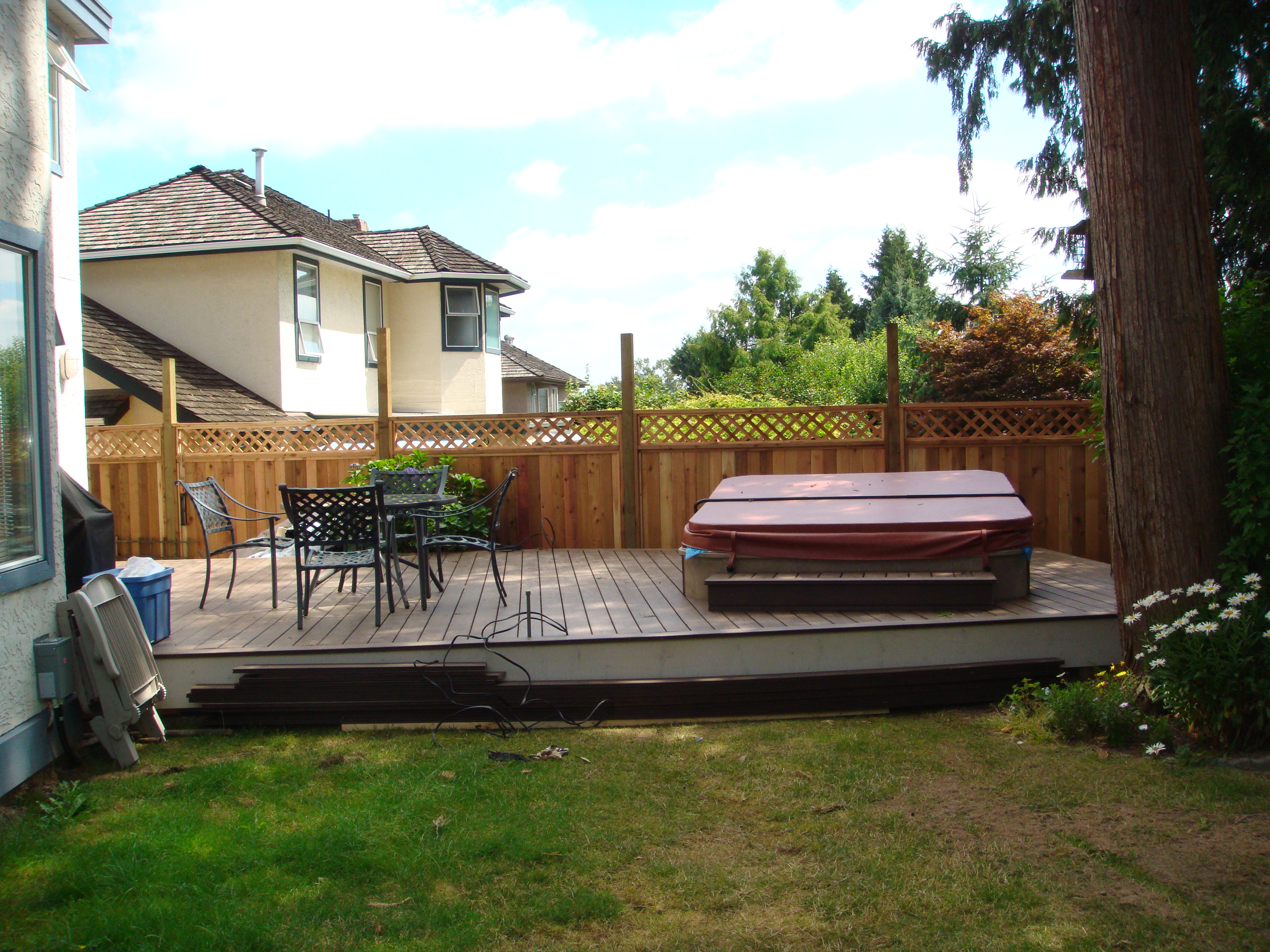 It is starting to feel like a deck! Stairs will be added on the west side (the side you see facing you in the photo above), but won’t be done until the roof is complete.

As you can see, we once again have a fence on the east side: it isn’t completely finished (the posts aren’t going to stick up that high 🙂 ), and the south fence hasn’t even been started yet. Supposedly the fencing will be completed this upcoming week. We decided to leave the fencing “natural” colour- it will be treated with a clear stain to protect it, but we’ll be sticking with the original cedar colour.

The roof for the deck probably will start the week after- that is, the week of August 15th. Then the final gas, electrical and lighting will be installed (you can see some rough wiring in the photo above, and if you look really closely you might notice the second gas fitting pipe), and we’ll be done. Well, other than final payments for everything (shudder).

Note that we already have 240 volt electrical running to the spa, and the spa itself has been full and operational for several weeks now. We used it the first couple of times when the deck material hadn’t even been installed yet- it was an obstacle course stepping through all the in-progress framing, but it really made me appreciate the deck itself when it was complete 🙂

Observations regarding the Timbertech planking. It is solid core material, and heavy as heck: each 16 foot plank easily weighs 25 pounds, probably at least twice as much as a comparable piece of wood. It also has a lot more “flex” than wood. Our deck has 16″ spacing between the framing planks (which are 2″ x 12″ pressure treated wood- only the horizontal surfaces are composite), with a triple-board cross member every 14 feet, and you can feel a little “bounce” in places. I actually kind of like the feel, but our contractor figures that, if he were doing it again, he probably would have put in a cross member every 10 feet. Unlike wood, the composite doesn’t make the structure more rigid: so the “bounce” is (according to the contractor) coming from flex in the framing planks.

Also note that the composites expand and contract more than wood- if you were to fit things together extremely tightly, on a hot day the planks would probably “buckle” slightly from the strain. We used the “concealed clip” attachment system Timbertech has, which allows the boards to flex/expand more and also means no visible screw holes. Between plank spacing with this system is maybe 3/8 of an inch, possibly a bit less.

If you look closely at the deck you’ll see that our contractor put a “frame” around the entire outside of the deck: this is a nice finishing touch that I like versus just trimming the boards off, and makes the whole thing look more elegant in my opinion. The specific decking product we used was Timbertech Earthwood, Tropical Walnut colour, grooved plank to work with the CONCEALoc concealed clip system. A note about that clip system: our contractor hadn’t used it before, and one of the workers commented that it was “slower” than using screws- I suspect this is more an observation about familiarity with the system than a true measure of effort- but something to be aware of.