We had a bit of an adventure last night, or more accurately very early this morning.  At around 1:00 am, Irene went to get up and her surgical wound started to drain…a lot.  It took half a dozen large paper towels and a big (2′ x 1′) surgical gauze mat to sort of stem the tide of mostly-clear blood tinged fluid, during which time I called the district health nurse.  Irene started shaking and feeling faint, which isn’t too terribly surprising under the circumstances.

After talking to me on the phone, the health nurse told me to call 911.  I ran around the house, grabbing as many cats as I could and closing them in a room so that they would be out of the way.  Five minutes later, we had a fire engine with emergency response at the house, and a few minutes after that we had an ambulance.  Irene was trapped in the bathroom with four big burly men and her pants down, while I talked to a fifth guy outside the bathroom giving him her particulars.  After the fact it’s sort of funny, but at the time it was far from it.

Of course, by the time the emergency folks arrived, the fluid flow had slowed significantly.  The firemen left, and the paramedics ran a few more checks.  One of the poor paramedics was badly allergic to cats…and he was in our house!  The poor guy was sneezing away, apologizing to us while I apologized to him for the cats.  The paramedics gave us the option of either waiting until later and going to a clinic for follow up, or going to emergency right away just to make sure.   We made our decision, and a few minutes later Irene was on her way to emergency in the ambulance, and I drove along behind with her book, care card, and water bottle, which she had asked for…but not grabbing a pair of pants for her, something both of us overlooked.  I thought of pants as I drove to emergency- strange how the most obvious things slip your mind.

We spent a fun two and a half hours in emergency before the doctor got to us…very nice guy, as all the folks at Langley Memorial seem to be.  He checked out the surgery site, said it looked basically fine, and said the drainage was a seroma.  In essence, blood plasma trapped in a pocket from the surgery site decided to leak out all at once.  The amount sort of surprised me, and definitely surprised Irene, but I guess it’s not uncommon.  The doctor prescribed some antibiotics to be on the safe side, and sent us home.

We were back at the house by 4:30 or so…I fed the cats so they wouldn’t wake us up right away, and we were in bed by about 5:00 am.  I fell asleep holding Irene’s hand, which was about all I could do throughout the “excitement”: thank goodness for all the health and emergency folks who knew more than I did about what to do.  Irene is fine now, in fact she was hungry when we got home from emergency and I had to feed her…okay, it was a tin of Ensure, but it was sort of foodish.  Both of us are sort of tired, but perfectly all right.

5 thoughts on “Excitement at the homestead…” 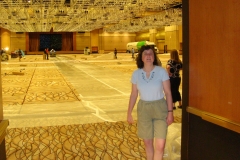