I believe in the importance of copyright.  I also firmly believe in “fair use”: that is, if I pay for the right to use your content, I have the right to use it for my own personal use on any platform I choose.  Thus I am totally against abusive DRM systems that (for example) prevent me from watching a movie on my computer, and later watching it on my TV.

My position puts me in a bit of a sticky position when it comes to “file sharing” and peer to peer (p2p) software.  If a person has a collection of music they have digitized from properly licensed CDs for their own personal playback on their computer or portable music device, that’s cool.  If they then install some sort of file sharing program to make their music collection available for anyone to download…that’s not cool.

But the music and video/movie industry is being incredibly stupid.  They don’t just want to stop folks from sharing files, they want to force people who buy a CD to pay again when they want to listen to that same music on their computer, and again to listen to that same music on their iPod, and again….  They also want to have legislation that would allow them to illegally search and seize your home/computer to “prove” you are violating their laws.  They want people to believe that file sharing is so important, such a huge crime, that wire taps, keyboard/data logging, and prison terms are the norm.

They spend tens of millions of dollars a year, lining the pockets of government officials all over the world.  And money talks: witness the recent report from the U.S. patent office / Commerce and Intellectual Property Office that tells us that file sharing turns children into criminals and provides classified information to terrorists.

If you want to read the entire 80 page government report, go here (pdf file).  Technologically, installing a peer to peer file sharing program (as the report indicates) has risks for home users.  It is often not well understood by users that, when they download something using a p2p program, they usually immediately “open up” that file for download from *their* computer as well.  In a corporate / government environment, use of peer to peer file sharing programs should be controlled if not outright forbidden.  There is no place for uncontrolled Internet based peer to peer file sharing in the office (although arguably bittorrent is used for some important/necessary purposes, there are “safe” bittorrent clients available).  That much is true, and where I work, the traffic from common file share programs like Kazaa is blocked on the network.

But some of the conclusions and/or emphasis within the document is outright ludicrous.   Don’t share files: think of the children!  Don’t share files: you are supporting terrorism if you do!!  Man, those RIAA / MPAA goons must have really put on a niiice party for Under Secretary Jon W. Dudas….

4 thoughts on “File sharing: a terrorist plot, and think of the Children!” 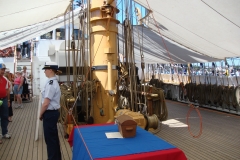