The cable content provider formerly known as the Sci Fi channel has renamed itself “SyFy”. Here is their reasoning for this rather bizarre change:

The name Sci Fi has been associated with geeks and dysfunctional, antisocial boys in their basements with video games and stuff like that, as opposed to the general public and the female audience in particular. We spent a lot of time in the ’90s trying to distance the network from science fiction, which is largely why it’s called Sci Fi. It’s somewhat cooler and better than the name ‘Science Fiction.’ But even the name Sci Fi is limiting. … (Changing the name to Syfy) gives us a unique word and it gives us the opportunities to imbue it with the values and the perception that we want it to have.

So in one giant leap, the SyFy channel has both insulted their entire existing client base and devised a new name that sounds like a sexually transmitted disease. It also means nasty things in Polish, apparently.

END_OF_DOCUMENT_TOKEN_TO_BE_REPLACED 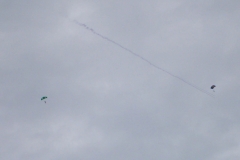