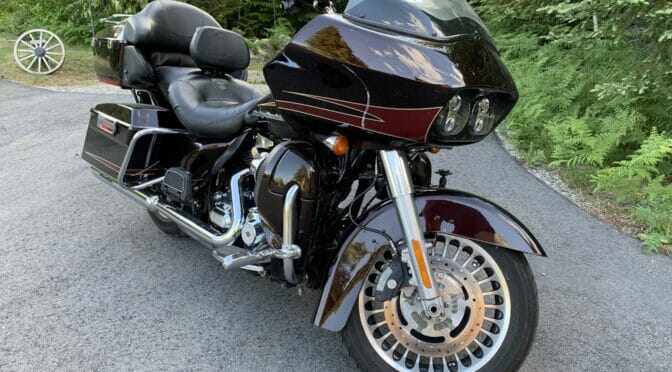 I left my motorcycle behind when we moved from Langley to Castlegar. Our move was in March: that’s an impossible time to ride a bike through mountain passes. And after much thought I decided I preferred the idea of riding it to its new home versus trailering or shipping it. So into storage she went.

The conditions aligned such that I was able to take a few days off at the beginning of June to go pick up my motorcycle and ride her to the new homestead. Things went well, but not perfectly- especially not for one mid-sized grey bird, who had a really awful day.

The Bus: Getting back to Langley

The first week of June was my planned window for retrieving my bike: unfortunately, Irene a) had no interest in driving me back to Langley; b) started work at the Castlegar RCMP detachment full-time as of May 31. This limited my options.

Booking a flight was unreasonable: it would have cost hundreds of dollars and required an expensive taxi ride to get from the airport to the dealer where my motorcycle was being stored. The second option was to use a bus: but that had some caveats.

Castlegar was serviced by Greyhound buses back in the day: not anymore, not for years. A few small independent bus companies have filled the gap left by Greyhound shutting down its more rural routes. The local company in Castlegar is Mountain Man Mike’s Bus Service. They run weekly trips from the Kootenays to Vancouver.

The amazing thing about Mountain Man Mike’s bus routes: their Langley stop is about a block from the motorcycle shop where my bike was being stored. And as luck would have it, there is a hotel right there as well. And their Castlegar pickup location is a coffee shop about two kilometres from us. Basically, the route was almost custom-built for my needs.

I departed per the MMMBS one weekly Castlegar pickup date: June 2, 8:40 AM.

The trip was actually not bad at all: the bus was only half full, I had unlimited leg room, and the other passengers were generally on the quiet side- my kind of people. It was, unfortunately, 35 degrees C, and the bus had no air conditioning. It was not ideal. After the bus ride I was exhausted.

The hotel near the motorcycle shop is a Sandman ‘signature’ hotel, which I guess denotes their ‘upscale’ properties. It was nice, and they even gave me an upgraded suite at no additional cost: unfortunately, I was too tired to care. I would definitely stay there again, though, if the need arises- hopefully next time for more than one night.

The next day I picked up my bike from Barnes Harley Davidson: no muss, no fuss, just an opening time that was slightly later than I’d hoped. In any case, I was on the road before 10:00 AM, which was good enough.

The ride from Langley back to Castlegar was… well, basically perfect. The weather was great, albeit a bit too hot with temperatures in the mid 30’s at several places along the way. But there was little traffic, only one small bit of construction near Rock Creek, and the roads were in excellent shape.

There was one sad incident on my ride: a bird decided to commit suicide via my motorcycle. It was… almost unavoidable. I came around a corner and saw something leap out to fly across the road at about the height of my knee. I suppose I could have hit the binders but… my reactions made an instant guesstimate of the stopping distance, corner conditions, and the distance to the bird and decided ‘nope’. I’m not sure if trying to stop would have done much more than move the collision point from near my knee to the front wheel- but that’s hard to judge after the fact.

The bird definitely died: I found bits of it on the leg of my pants, but mostly on my ‘lowers’- the fairing component of the bike which protects the rider’s legs. I felt pretty bad about it: I didn’t get any real look at the bird other than to note it was grey and about the size of my hand.

Do not look at the following photos of the avicide evidence if you are sensitive. I mainly include them here because the feathers might tell someone with more bird knowledge than I have what type of bird I hit.