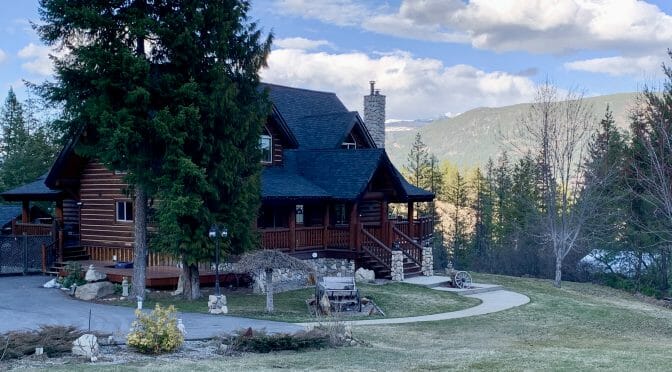 I became smitten with the West Kootenay region (although I didn’t know that was what it was called at the time) several years ago. My motorcycle trips brought me up the Slocan Valley through New Denver, Nakusp, and north up to Revelstoke a few times. And then one year I rode up through Castlegar, Nelson, and Ainsworth. The mountains, the curvy roads, the lakes and rivers: I fell in love.

I eventually booked a vacation with Irene at the Ainsworth Hot springs: after several days in the region, she was in love too. But back in the Before Times (i.e.: 2018), moving to the region was a retirement dream.

Then came the Pandemic…

Everything changed with the arrival of COVID-19. I suppose the biggest change for me was the year before when I had a few unrelated health ‘scares’ of my own. That made me think a lot about what I really wanted. The pandemic brought that more clearly into focus.

And the whole ‘work from home’ thing really changed my employer’s policies about having to be in the office even periodically. Eventually they started shutting down offices- permanently. So when I asked if I could relocate somewhere entirely without a corporate office, the answer was now ‘yes’. All I needed was high speed internet and, for the foreseeable future, I was untethered from the office. Irene was ready to retire, so work for her would no longer place any demands on where we lived.

Irene and I took a week to house-shop in the area we wanted when pandemic lockdown restrictions were eased in September of 2020. There are a lot of nice little towns in the West Kootenays, but we narrowed our search by property features (a couple of treed, private acres, open plan ‘log style’ home) and location requirements (not too far from medical aid; good roads).

The area up around Nakusp, according to our research and our realtor, can get snowed in during the winter. So that pushed us towards Trail, Castlegar, and Nelson. From there it was just a matter of shortlisting.

Initially we considered buying an undeveloped property and building our own home as one option. But then we found a place that was close to perfect, unexpectedly close to Castlegar, on 2.5 acres.

We needed to do some renos on our old place to make it more ‘marketable’, and with seven cats that really meant moving out completely first. And due to possession dates, etc, it ended up that we took possession of the new home in Castlegar in December, with Irene not being able to retire and move until (at the earliest) February 2021. So for several months we lived apart, staying connected via daily Skype sessions and phone calls.

I got to become familiar with the local winters. We knew there would be lots of snow, but not as cold as we had been used to from Edmonton. But it was educational living through it versus thinking about it.

There was snow cover pretty much continuously from November (before I relocated) through March- definitely snowblower country. Temperatures never got below -15, and most days were -5 or so for a high.

The actual move of Irene, our seven cats, and our ‘stuff’ happened in March. We hired professional movers and discarded much of our furnishings before hand but, despite these good ideas, it was still a ton of work. I was stiff and sore for quite a while afterwards.

Our seven cats were duly loaded into our two vehicles and they have been settling in nicely since. Irene and I have been unpacking for the past month: progress is being made, but it is ongoing. I suspect there will be boxes we don’t unpack for years, if ever. But we are settling in nicely, and as I mentioned in the very first paragraph, our old house has sold.

Our new home is lovely. We are surrounded by trees and mountains, and the house itself has windows and decks galore. There are a lot of things that aren’t quite ‘right’: projects to keep us busy and poor for years.