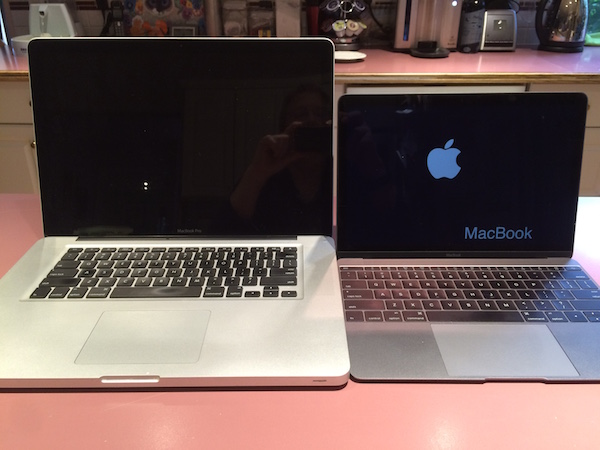 What led me here

I’ve had two MacBook Pros in the past decade, the most recent purchased in 2011.  I also have an  iMac, circa 2008, that I almost never use.  The Pro has basically been a desktop replacement for all of my personal uses.  I use it for all the typical web browsing, photo editing, video editing, website development, trip planning (GPS route editing), and writing.  I also carry it with me when I travel, including when I ride my motorbike.

Therein lies the problem: my 15” MacBook Pro is doing everything.  And its weaknesses are starting to show: it isn’t powerful enough to deal with large video editing (which I do occasionally), and it is too big and heavy to be convenient to cart around.  I never use the iMac because it is actually slower than the MacBook Pro.  Yet the MacBook Pro really doesn’t make a very good ‘high performance workstation’, nor is it super portable.

This came to a head for me when two things happened in a relatively short time frame: I worked to assemble a video from my 2013 motorcycle road trip, and shortly thereafter went to Hawaii with my wife.  The video editing was made more tedious than it could have been because the 2011 MacBook Pro has a relatively slow processor and slow GPU. It is slow even though I’ve upgraded the memory to 16 GB and installed a higher speed drive with on-board SDRAM cache.  The MacBook Pro isn’t a very good high performance workstation.

Then comes the issue of portability.  I felt a bit like a sherpa carrying all of my electronic gear through the airport on our trip to and from Hawaii.  The 6 pounds or so that the MacBook weighs sounds fairly light, but that becomes less true when you are carrying it around for several hours.  And this is even more true on a motorbike: the MacBook Pro isn’t a very good ultra-portable.

I decided to fix one problem at a time.  Since I edit video rarely, I would aim to make my main (portable) computer as small and light as practical.  Then, when finances permit, I would build a superior workstation, probably centred around a Mac Pro.  So step one is a MacBook, with a bit less Pro.

The tale of the tape 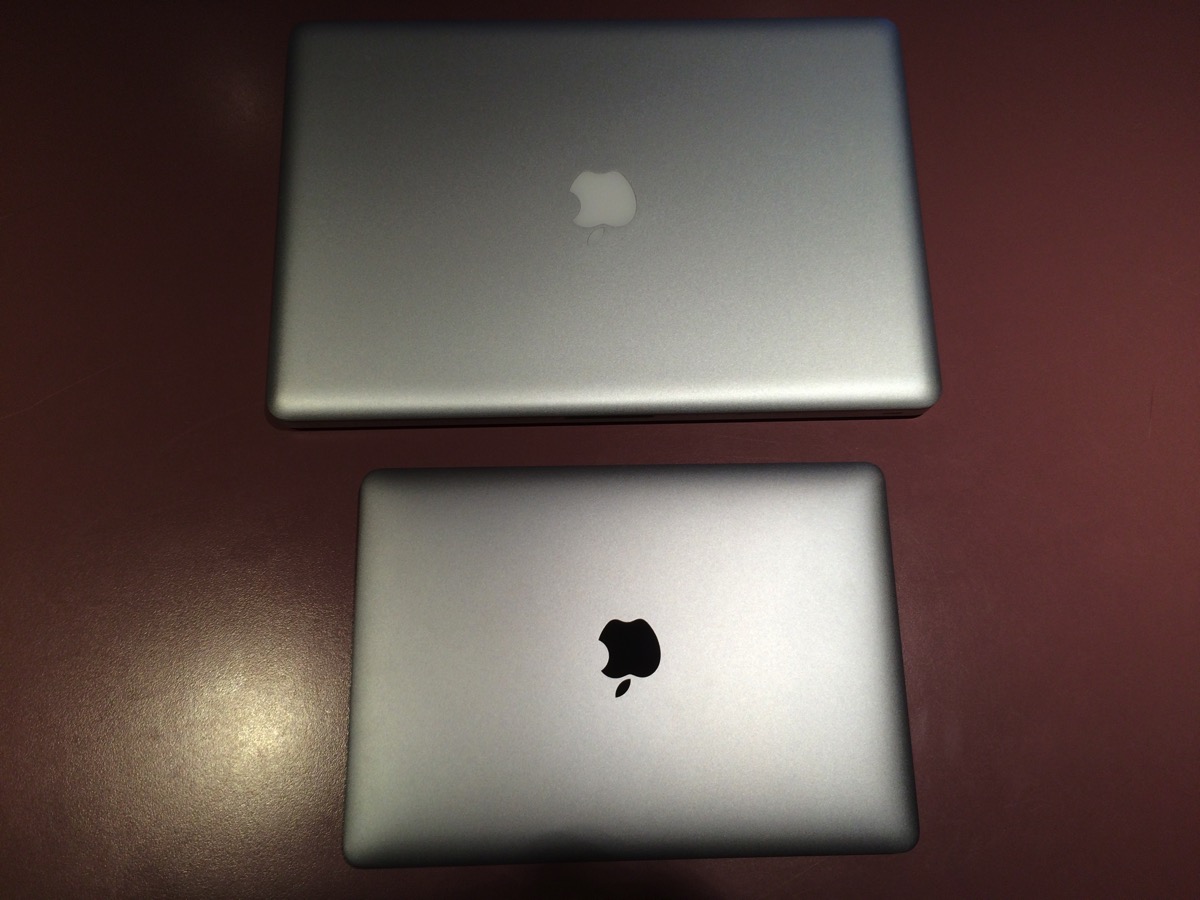 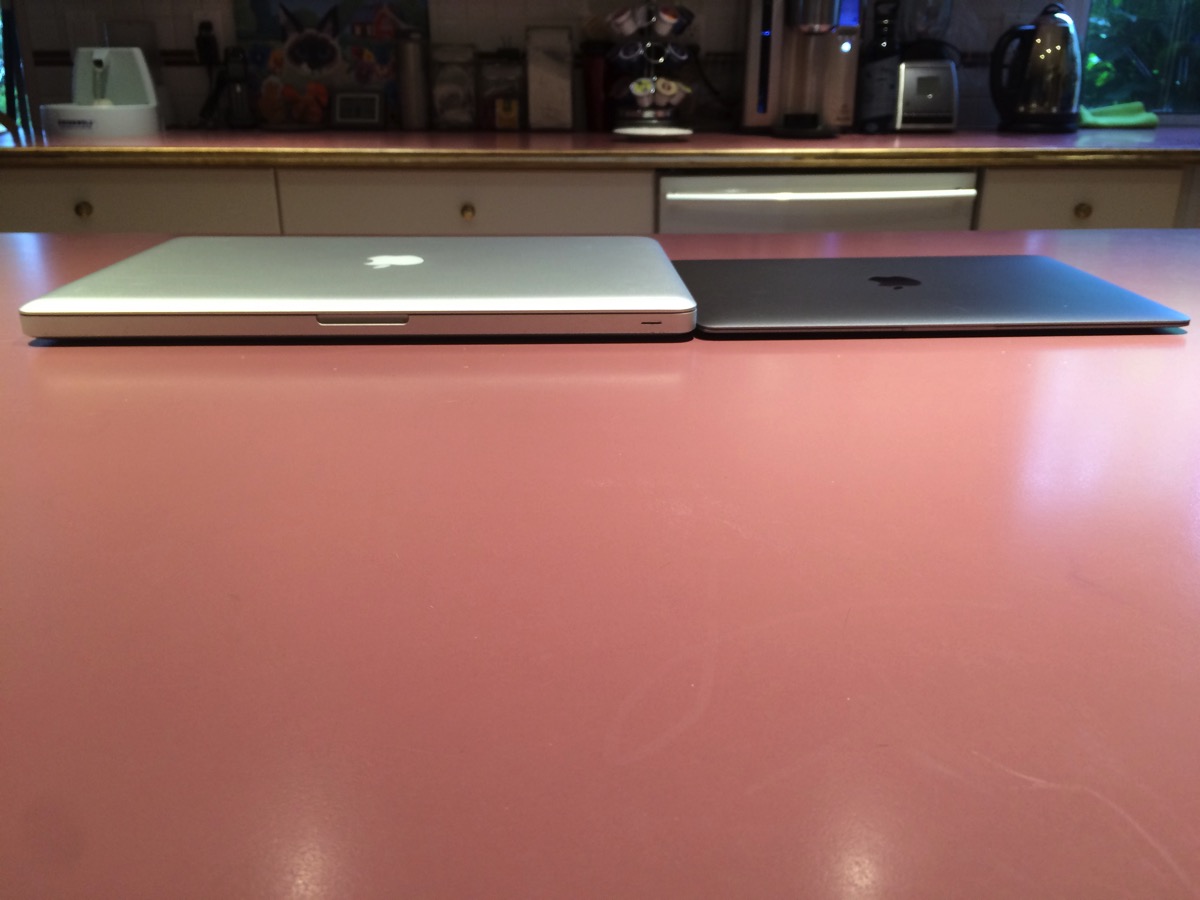 The 2015 Macbook is substantially less than half the size of the MacBook Pro.  Thinner, lighter, and smaller in every dimension.  In fact, it is so light and small that I had to be careful not to toss it around: something which I could never say for the MacBook Pro, which always felt ‘substantial’.

There are tradeoffs here, and this is unsurprising.  In addition to feeling disturbingly light, the MacBook is almost ridiculously spartan.  A single port, no CD/DVD, no fan… it is quite a departure from the Pro version.  Although on the surface, the MacBook appears to have about half the processing power, I never observed any performance drop in day-to-day tasks.  Most notably, editing and organizing photos in both Aperture ( and,  after I ‘upgraded’, Photos) actually seems faster.  I would, however, never even try to edit the multi-gigabyte videos I was trying to work on with my MacBook Pro…

Some of the pros for the 2015 MacBook are obvious, some less so.  In no particular order:

The MacBook isn’t for everyone.  I would say it makes a great second computer, not a great primary computer.  Some of the factors that follow feed into this assessment:

I’m very happy with my choice to “downgrade” my portable.  I now have ultimate portability: there are no weight or size issues here.  Whereas the MacBook Pro was a compromise between portability and power, the 2015 MacBook is no compromise portability.  The lack of any ports is a bit extreme to my thinking, and it is possible the USB-C will be supplanted in the future by the USB-C compliant Lightning port that Intel announced recently.  But for my purposes, having to hook up a dongle on the reasonably rare instances where I need a DVD drive or external display isn’t going to be an issue.