We had our kitten Harley, barely five months old, euthanized last night.  His last ten days of life were full of subcutaneous fluids, forced feedings, several antibiotics, and lots of love.  In the end I was faced with a decision I never want to have to repeat.  Harley’s immune system was damaged beyond repair by the feline leukaemia virus and, although we had managed to keep him alive for a few extra days, it wasn’t going to get better.

The prognosis was several weeks or months of life, filled with daily forced feedings, fluids, and drugs.  His body lacked the ability to fight off all the ordinary bacteria found in the air, the water, the food that healthy cats shrug off every day.  The vast majority of kittens at Harley’s stage die before they are a year old. I ultimately decided I couldn’t put Harley through never-ending treatment… selfishly, I couldn’t put myself through it either.  Every time I had to stick a needle in him, or syringe food down his throat, it felt like I was abusing the little guy.

My heart is broken.  I feel guilty, sad, and angry.  Angry at a world where people can’t bother to spay or neuter their cats, where cats and kittens in untold millions are abandoned at shelters because people treat them as little more than unwanted toasters or unstylish throw pillows. 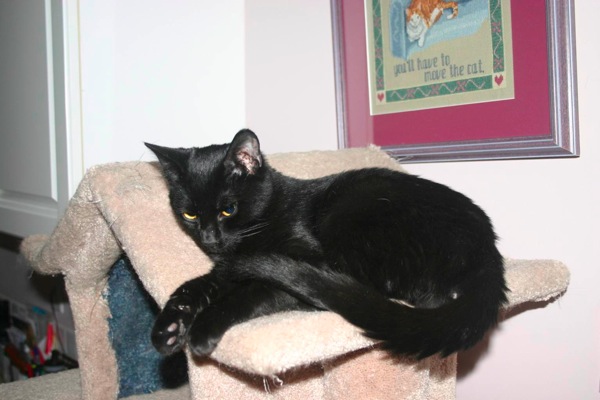 Good bye, Harley- your cuddles and purrs will be missed, and the zipper pulls on my clothes will never be chewed on with so much mischievous love again.