Last weekend we made the decision to have our cat Bilbo euthanized. I’m still dealing with it, and probably will be for several weeks if not months. He was, after all, my friend for the last eighteen years. 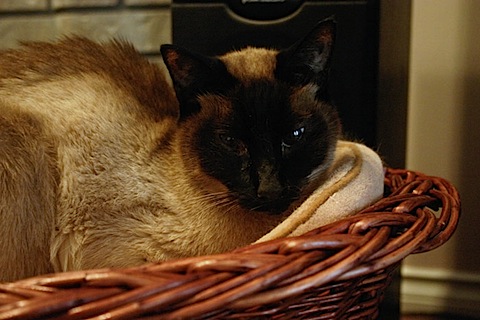 Bilbo and Susu joined Irene and I and our two cats Jaegar and Leopard in 1992. I had promised Irene that, once we had our own house, we’d adopt a Siamese cat. After some discussion, we agreed that the right thing to do would be to adopt a pair of siblings. We wanted “traditional” Siamese, sometimes called “apple-head” Siamese to distinguish them from the more “pointy” (elongated) cats that most Siamese have become. Bilbo and Susu were two of three kittens still awaiting homes from a purebred litter. When we brought them home they were about 14 weeks old.

Bilbo’s name was chosen primarily as an outgrowth from several nicknames he had as a kitten: “big brother”, “bad boy”… and a desire to have a two syllable name to match Susu who’s title was already selected before she came home with us. And of course the name has a nice ring to it for a fan of J.R.R. Tolkein’s works (pun intended). Bilbo Baggins, known mostly as “Bilbo”, seemed comfortable enough with his name.

Bilbo and Susu both had an air of royalty about them. They played, but in a reserved fashion. Catnip was beneath them, as were most crazy running around games which the other cats that joined our household occasionally played. And oddly enough, the other cats generally deferred to the Siamese. But neither Bilbo nor Susu were standoffish, not in the slightest. Both of them loved being cuddled and held once they settled in with us, and would consistently be the first cats on our laps when we sat down on the couch. Purrs were a normal part of this process. And I can’t recall ever hearing a serious hiss from either of them, although both of them had a tremendous vocabulary. That is one of the joys (or curses) of Siamese cats- they love to talk.

I had only been a married man for a couple of years when Bilbo came into my life. I was 28, still “young” by many standards, and we had just bought our first home- an acreage east of Edmonton. For the first eight years of his life, Bilbo lived on a quasi-rural environment: his back yard was acres in size, a space he shared with horses, rabbits, mice, shrews, hawks, dogs, deer, and coyotes. He became the patriarch of an increasingly large family of cats, as many as seven others sharing his home and his humans with him. But Bilbo was always the gentleman, and tolerantly greeted new members of the family.

Bilbo became our feline ambassador, and for the younger cats he was “Uncle Bill”. Sick or scared cats seemed to draw out some sort of mothering instinct in Bilbo: almost without fail, he would curl around and cuddle scared newcomers before others would get close. I think his example was a strong reason why we were so successful in integrating new cats into our household. 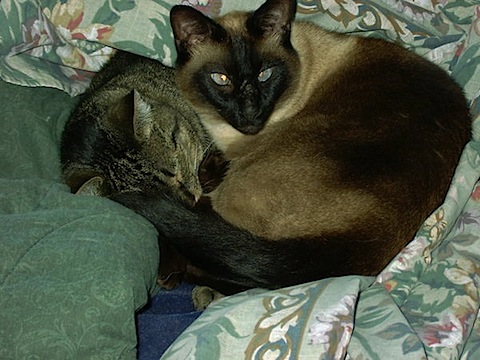 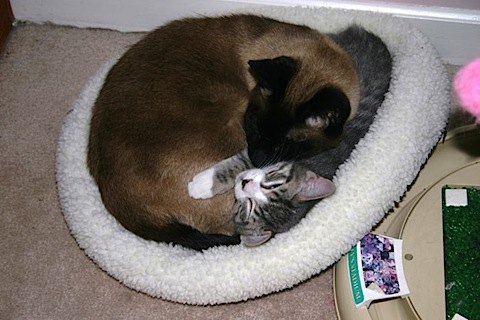 Every time I picked Bilbo up, he would immediately settle himself in the crook of my left arm with his head on my shoulder. If I forgot his preference and put him on the right side, he’d scramble to correct my error. Sometimes he’d meow several times to chastise me for the incorrect placement. His crossed eyes made him unsure of new spaces, but once he got things figured out he was as brave as any cat. When I slept, he’d generally try to insinuate himself under the covers in the crook of my arm as well, although for some reason he was less choosy about which side when I was horizontal.

Amazingly, despite how odd his vision must of have been, he was a proficient hunter on our acreage when he was younger. I think, however, that Bilbo was what could be called a “sport hunter”: it was an enjoyable activity for him, but not something he felt overwhelmingly compelled to do. From time to time he’d bring us a bird or mouse, more or less (it seemed) just to say “you see, I’m still quite the hunter. Now where is my canned food?”.

Bilbo was a part of arguably the best time in my life. Irene and I were figuring out married life, my career was doing well, and there were lots of positive changes happening every year. He moved with us from Alberta to B.C. and, after the trauma of the trip (he hated it) settled in happily in his new home, despite having to give up his hunting grounds. The milder winters agreed with him, and he he was completely at ease as a purely “indoor” cat.

The only really unpleasant part of Bilbo’s life that I am aware of came in the fall of 2005 when he disappeared outside and was missing for over a day. When he came home he was in sorry shape: he had obviously had a run-in with something big enough to bite his back, and it took weeks for Bilbo to return to his normal happy self. I still wonder how much of his life was consumed in surviving that one incident. Bilbo showed absolutely no interest in getting outside from that day forward.

The last couple of years were tough for Bilbo. His kidneys started to fail, and he lost over half his body mass despite special diet and care. In his prime, Bilbo was over 6 kilograms: during the last month of his life he had dropped below three. We started regular at-home doses of sub-cutaneous fluid, and that seemed to perk him up. He was still fairly mobile, although increasingly wobbly, until the last week.

Watching him wobble and collapse as he tried to walk from his chair to the water bowl during the last week of his life broke my heart. It was clear that his strength was gone- he could barely hold himself up as he drank, his front legs collapsing and folding up at awkward angles. I knew it was time, but that didn’t change the sorrow I felt at having to make the decision to end his life.

Bilbo’s vet, Dr. Michelle Levesque, helped us through the decision and the process that followed. I’m afraid I didn’t hold up very well, but Irene and I were there with Bilbo when he died. Eighteen years is, by some measures, a long time- but right now, it seems far too short a span.

Click the photo below to see pictures I took during Bilbo’s last two days with us. 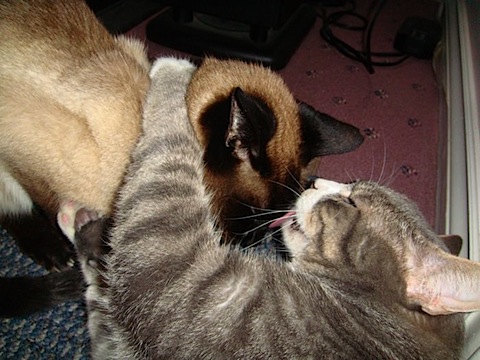 4 thoughts on “My friend Bilbo” 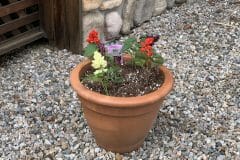