I’m not really a gullible person. I tend to prefer claims backed up by multiple reputable research sources. That said, I am willing to try things that are a bit “out there” if the potential negatives are balanced out sufficiently. I mean, even if something doesn’t really work, if it does little or no harm it may help purely via the placebo effect.

This brings me to a couple of things I’ve invested in recently. The first actually has a fair amount of supporting medical research to support it. The second is pretty much debunked. Yet I’ve adopted both into my life, well aware of the limitations of each. I’m referring to the use of neti pots (or nasal lavage) to improve sinus health, and the second is the use of Himalayan salt lamps. 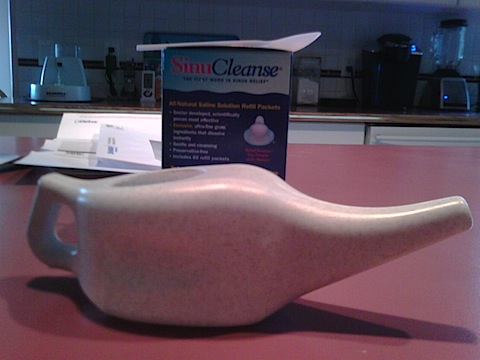 The basic idea of the neti pot is to flush salt water through your sinuses. Some lavage methods have the cleansing solution (basically salt water perhaps PH balanced with sodium bicarbonate) flow into your throat, others flow the solution from one nasal passage to the other: the neti pot approach uses the latter method.

There isn’t a great deal of solid medical understanding of exactly how nasal lavage improves nasal health, but the benefits themselves are documented by numerous medical bodies, including the Mayo clinic. The best theories are that, by cleaning out or flushing the accessible sinuses (the ethmoid and maxillary sinuses), the sinus’ self cleansing systems are better able to “catch up” with the cleaning in the less accessible sinuses. Doctors world wide are now commonly recommending nasal lavage in general and the Neti pot method in particular as a supplemental treatment to reduce reliance on corticosteroids and antibiotics.

So, the Neti pot works, we just don’t yet know exactly how (although we do have some good theories). However, on first glance it can be a rather difficult thing to imagine doing every day. I don’t like fluid in my sinuses: I react strongly and instinctively whenever my head is submerged- it is one of several reasons that I am afraid (if not phobic) of deep water. So it took a lot of convincing for me to try nasal lavage. And I did so in a rather incremental way.

First I bought a commercial “compressed fluid” cleaner. Basically, it shoots a stream of (moderate pressure) saline, and the idea is that the fluid will go into your sinuses and down your throat. I found two problems with this approach. First, it is expensive: about $10 a tin, and the tin only lasted me about three days. Second, I found that it got the fluid into my sinuses, but it didn’t drain… and it was uncomfortable. So I read some more, watched a couple of “how to” videos on Youtube (the cute blonde didn’t influence me at all…), and then went back to London Drugs and bought a SinuCleanse neti pot.

I’ve been using the SinuCleanse pot and pre-packaged salt/sodium bicarbonate for over two months now. I don’t use it every day: probably three or four days a week. And I find it really does seem to work: on days where I feel continuously congested, a quick neti pot cleansing helps me breath more clearly for six to eight hours. That’s at least as good as most nasal sprays, and isn’t pumping me full of quite so many chemicals. When I first started using this system I was on the tail end of a cold and was about to go to the doctor because my sinuses had been badly congested for over three weeks: within a week, my sinuses were back to normal, and I never did go to the doctor. 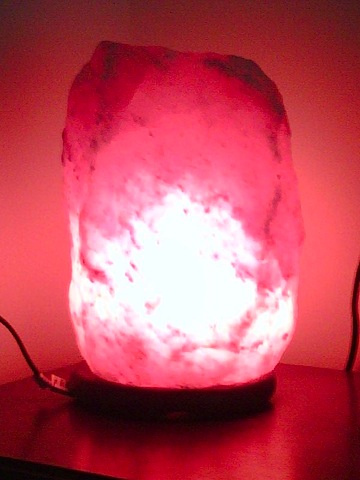 In simple terms, a “salt lamp” (sometimes called a “Himalayan salt lamp”) is a chunk of rock salt with a light bulb inside it. The sellers of these purport that the bulb heats the salt, and through some mysterious method involving moisture and alchemy, negative ions are produced. If you believe the sales brochure, we are surrounded by “bad” positive ions created by electronic devices, and we all need to balance this out with negative ions to improve our health, our “chi”, and our feng shui… or something like that.

I saw these at a Shoppers Drug Mart home health care store some months ago, and thought they looked neat. The purported health benefits sounded pretty unlikely to me, and my subsequent research seemed to support my skepticism. I don’t really see how a chunk of rock with a warm lightbulb is going to produce negative ions and, furthermore, there is no real medical evidence indicating that negative ions, positive ions, or some kind of balance between them is beneficial.

So, that leaves the use of a salt lamp as a decorative item. They do glow a nice colour, and I could imagine that under the right circumstances the heated salt could produce a pleasing (although likely very subtle) scent. I liked the appearance of the glowing rock, and so I was quite happy when Irene offered to buy me one. I have no illusions regarding the purported medical benefits: however, if the ambient light pleases me, it may very well have a calming placebo effect. And I don’t think there is anything wrong with claiming a purely emotional or “spiritual” benefit from something. Just be careful about expecting any kind of real, measurable medical benefit.