The first thing I bought on eBay is the last to arrive: an antique mantle clock, circa 1870 France, shipped from Germany. It took a long time to get here, and apparently spent a while in Canada Customs. Both the main outer box and one of the internal boxes was opened by our friendly border monitors who were, no doubt, worried that I was receiving… actually, I have no idea what they would have thought I was receiving from Germany. But the clock is here, so now it is time to dig into the details.

The clock itself is fairly typical for the French Empire period pieces that I’ve seen on eBay and in various auction catalogs- that is, it is rather ornate. The main body or case is black marble with pink/grey/red variegated marble trim. The feet and decorative “handles” are gilt bronze: supposedly the gilt is all original, but I find that somewhat hard to credit. However, I’m pretty green regarding these things, and I’ll just say it looks pretty fine.

The clock mechanism itself is in good working order, or at least it has been running and keeping time since I assembled it (more on that below). It is marked “P.D. Paris” with a serial number “1719” on both the mechanism and pendulum. The mechanism appears to be in excellent condition: as with the gilding, it is hard to imagine this is nearly 140 years old. However, I can confirm that the age is reasonably accurate based on other clocks with the same maker’s mark and similar (or higher) serial numbers- they are all made in the mid 1800’s. The face is enamel, and is marked with the words “La Motte Beuvron” (which I believe is a small town in France) and another word that looks like “Charpiery”, but I’m sure I have that wrong as looking it up on Google finds nothing.

The clock seems to be having some difficulty ringing its bell: it sounds rather pathetic, and the “hour” rings don’t seem to be counting correctly (it rang 13 times for 2:00 PM). But I’m going to give it a day or so to settle before I worry too much.

I was really curious when I ordered the clock: how exactly do you ship something made variously of stone, thin/fine metal, glass, and delicate mechanical parts thousands of miles? The answer is: very carefully, and in parts.

I fully expected the pendulum to be removed- that is a delicate piece, after all. But the clock was actually nearly completely disassembled. All the “bright work” pieces were removed. The legs, top decorations, and pendulum were packed individually in ziplock bags within a peanut-filled box. That box sat beside another box, wherein the clock mechanism was ensconced in bubblewrap and more peanuts. A third box, similarly carefully packed, contained the marble case. All three boxes were packed within a fourth box, with about four inches of peanuts on all sides. This was wrapped with a cord, the ends tied off and sealed with an old-fashioned wax seal. Customs did a surprisingly gentle job of unpacking this and repacking it- they didn’t disturb much, and seemed most interested in the internal marble clock case (the didn’t open the boxes with the individual parts). The whole thing was shipped via DHL: the shipping itself was about $100, and then Customs tacked another $60 onto that.

The dealer also included a little treat: sealed in its own ziplock bag with the clock parts was a chocolate bar. Irene has already claimed that for herself. But I was left with the challenge of putting the pieces back together without instructions. Fortunately, nothing was very complex- really, it was only eight pieces or so, and where each went was pretty obvious especially in light of the original photos on the auction site. Note that I expect the photos and listing to disappear soon, so I’ve archived the page and its contents locally.

The top decoration consists of a metal rod onto which slide a number of “bits” in a particular sequence: all I needed to do remove the bits (which the seller had thoughtfully replaced on the rod in the correct order), put the rod through the top of the case, and replace the bits one at a time in the same order. At this point I began to believe that the clock truly was over a century old: the rod and the nut that holds it in place, even the washer appears hand-crafted. The signs of wear are apparent but minimal.

The feet had little screws fitted into brass sockets in the stone: the screws had been re-inserted in their sockets, and it was obvious they were intended to hold the feet. This was simple enough, and again as I handled the screws they showed definite signs of their age. If this clock isn’t legitimately 140 years old, someone went to a great deal of effort to properly simulate the impact of a century of wear and exposure on metal.

Inserting the clock mechanism was also pretty straight-forward: it is quite obviously intended to be removed for servicing. The only time I hesitated was when it came time to hang the pendulum and attach the small bell. The pendulum hangs from a fine wire “swing”, and so I was worried about damaging it. And once I had it in place, I immediately tried to center the clock mechanism with the 12 precisely centered at the top… which unbalanced the pendulum. That is, it didn’t swing… it took me a moment to realize I needed to rotate the mechanism slightly off of what I thought was “true center”: once I did this, the pendulum swung freely, and I realized that two things. First, the fast/slow adjuster is the true center for the clock, and it definitely sits slightly off of the 12. Second, I realized that that looking at the original sales pictures again would have made the need for the 12 to be slightly off center immediately obvious: that’s the way it is in the picture: 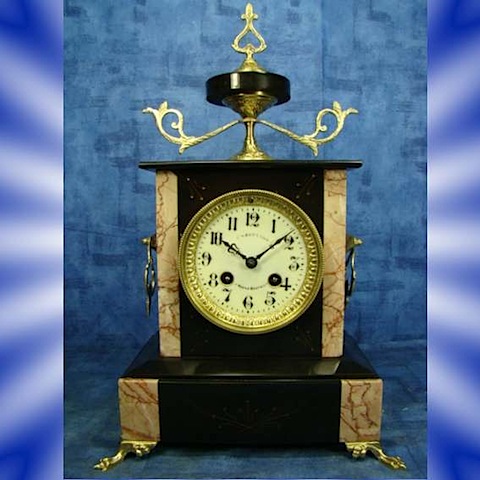 If you look at the face in the picture, you can see what I mean: that small black dot that is perfectly centered slightly above and to the left of the 12 is the fast/slow adjuster. The pendulum is precisely centered behind that dot: rotating the mechanism to put the 12 dead center makes the fast/slow off center, and unbalances the pendulum. Strange, but true.

I faced a similar uncertainty with the bell. The striker needed to be gently moved, the bell attached to a screw-pin on the back of the mechanism, but at first it wasn’t immediately obvious how it was to be attached. Then I realized that there was a knurled nut attached further along the screw pin which, once removed, would allow the bell to be more properly seated and, once replaced after positioning the bell, would serve to hold the bell in place. As I mentioned previously, the sound of the bell is rather anemic: the striker rests on the bell between each strike, which “deadens” the sound. I’m not sure if this is intentional or if there is a further adjustment necessary. Also, I noticed that the clock struck an odd number of times on the hour. The one time I’ve caught it striking the hour so far, it rang (by my count) 13 times for 2:00 PM. If it had rang 14 times, I could have pretended that was military time, but no such luck 😉

I have it set up and running now. Rotating it around to open the back and “experiment” with the bell mechanism is not very feasible: I’ve found that the pendulum stops every time I rotate the clock, making me think it is best just to leave it be for a while and let it “acclimatize” to its new home.