I just completed a completely unnecessary and unintentionally expensive upgrade to my main gaming computer. Of course, this means it is time for something to unexpectedly break and need replacing.

What broke? The amplifier for our home audio system. There were some clues that things weren’t working quite right with the amp a couple of weeks ago. There was a loud “Pop” from one of the speakers and the amp put itself into “overload protection mode”, which usually means a wiring problem. I traced the wires and couldn’t find a problem… yet even completely disconnected it still went into “overload” mode. I pulled the chassis off the thing, blew out the dust, and it worked…kinda. From that day forward, the old Sony amp produced somewhat odd sound effects. It was sort of like one of those early 70’s albums where they were having drug-induced giggles playing with stereo effects…except in our case there are six speakers, so it was even more fun. The volume would rise and fall from speaker to speaker in a strangely hypnotic pattern. I muttered and said “damn Shaw cable”, hoping that was really the problem. I also muttered “could be the amp, though…”

Unfortunately, it started really annoying Irene. I knew this was the case when she called me today from work and said “if I gave you $500, could you buy an amp?” Naturally, I said “Yes”. A bit of research later, and I was off to Best Buy. I think Best Buy will soon be putting a picture of me on the wall, and starting some sort of competition: “get this guy to buy an extended warranty and earn a special bonus!” Today I think I set a world record: I walked directly to the shelf, pulled the amp off the rack, and was through the checkout counter and out the door in slightly less than ten minutes, total. Not a single sales troll got within 3 meters of me, I wasn’t asked if I needed any help, and the checkout guy only meekly and somewhat apologetically offered me an extended warranty. The total time in-store included a brief diversion to grab a monitor arm for my computer’s LCD display.

What did I buy? Well, I’m not an audiophile, so don’t read this if you are: my gear is pretty basic. I was replacing a Sony STR-DE945 Tuner/Amp… I hear retching sounds out there- I thought I told you audiophiles to leave? I bought it in, I believe, late 2000, shortly after we moved to B.C., and it served us reasonably well (although I’m disappointed regarding the way it has died). I went looking for something that would be ever so slightly better: mainly I wanted an amp with better build quality, HDMI input, and a “self-calibrating” feature.

What I settled on was a Yamaha HTR-6060. It has all the features I was looking for, and the price was right ($499.99). The best feature thus far in my opinion: the YPAO calibration system. The amp comes with a small microphone- you plug it in, position it where you would sit, bring up the amps on-TV menus, and start the calibration process. It checks your wiring, tests each speaker, then runs through a series of frequency and volume calibrations to optimize the sound. It was great- the first thing it did was identify that I had hooked up my speakers incorrectly (plugged the rear channel into the “rear surround” channels (which I don’t have- 5.1 speaker setup, not 7.1). Then it identified a wiring problem with my front channel (said the speaker was too far away- what was actually wrong was that a wire was loose). Once these problems were corrected, it did a first rate job, for my ears anyway, balancing the sound.

I’m basically happy with the end result, although I would have been happier if the Sony had lasted a few years longer. Now all I need to do is corner Irene and get that $500 off of her… 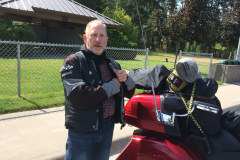