If there is one thing that can make me giddy when I’m working on a computer upgrade project, it is a well-designed case or chassis. Well-designed means:

My favorite case manufacturer to date has been Antec. Their cases generally meet or exceed all the items on my list of requirements. My most recent full computer chassis from them was the P180: it’s a fantastic case, and I’m very happy with it.

Choosing a hard drive enclosure early this year seemed like a no brainer since I like Antec cases so much. I bought Antec’s MX-1 “actively cooled” enclosure. It looked like typical Antec: well made, easy to open, all screws easily accessible and nicely sized, with excellent cooling. Unfortunately, after just a bit over six months of use it died…rather completely. And finding a replacement wasn’t a picnic…

The MX-1’s failure took place over the course of about a month. I had installed a 750 GB SATA drive when I first configured it. After about five months of use with my Vista PC, I noticed that the fan in the external drive enclosure was making a “grinding” or buzzing noise. It sounded like the fan was hitting its shroud. I disassembled it and looked at it, but couldn’t see an obvious cause. The fan is quite compact, and its shroud is closely aligned with the fan blades: a little vibration, and the blades could easily be rubbing plastic in any dimension. However, it seemed like the fan was still doing its job, and I didn’t immediately notice a problem…until about a month later.

I started powering off my Vista machine after each use: I’m really only using it for a few hours each week, mostly on the weekend. When I powered it back up one day, the drive in the external enclosure was not detected. The fan that day was making a particularly unpleasant sound, so I powered everything down, powered things back up, and the second time it worked. The same thing happened again a few days later. This time, I noticed that the light on the hard drive’s external power supply was flashing slowly…and when I powered back up again, it still failed to connect. I checked the drive by attaching it internally in my computer and it worked without a hitch. Put it back in the enclosure, and it failed. In a battle between the $45 enclosure and the $300 hard drive, the hard drive always wins…especially when the hard drive is full of data I don’t want to lose.

I did some online searching and found references to other people experiencing unpleasant noises from the MX-1 enclosure, even after several replacements. I really wanted to like my Antec hard drive enclosure, but the evidence was suggesting it was a lemon. So, what should I get as a replacement?

As it happens, I had recently ordered an expensive Wiebetech Toughtech XE drive enclosure that supports Firewire 800 for my MacBook Pro, so I wasn’t wanting to spend a ton of money. I should point out that the Wiebetech is cost me over $100, and from a fit and finish perspective was far behind the Antec MX-1. I’ll tell you in six months if the Weibetech is still working…

So, what kind of external drive enclosure supporting eSATA could I get for under $50 that I would feel worthy of trust? After some poking around, I settled on a Coolermaster XCraft RX-3SB. It is a nice enough enclosure, but relies entirely on passive cooling: no fan. That is a plus and a minus: the 750 GB 7200 RPM drive I’m putting in it throws out a lot of heat. But…Coolermaster has a good reputation for heat management, the entire case is supposed to be a bit of a heat radiator, and I’ve not had the best of luck with “active cooling” with external hard drives.

The Coolermaster is pretty enough, but has some basic flaws. Firstly, it claims to have a tool-free setup: yes, this is true, but it is actually much more of a hassle to put a drive in the “tool free” Coolermaster than in either the Antec MX-1 or the Wiebetech Toughtech. First, opening the case is fiddly: it is *very* tightly fitted to the top of the drive, for one thing. This is necessary, I guess, since the drive actually makes contact with the outer part of the enclosure to transfer heat: in fact, it even has a heat transfer “pad” like a CPU cooling block/fan. Second, the drive itself sits on little spring-mounted “pegs” instead of being screwed in to the enclosure. Getting these little pegs into the drive’s screw holes is a frustrating exercise: the screw holes are on the bottom of the drive, so essentially you are aligning them without any visual indicator. Good luck: personally, I’d rather have to go get my screwdriver, thanks.

Also frustrating to me is the fact that the SATA power and data connectors are backwards compared to the drive. My drive isn’t exactly uncommon: a 750 GB Seagate Barracuda 7200.10. Yet both Coolermaster and Wiebetech’s cases (I checked) have the left cable going to the right connector and vice-versa in their cases. This means the cables have to crossed and, in a tight space, this means it is probable that the cables will interfere with the opening and closing of the chassis.

And finally, although the case *looks* good enough, much of it is made out of chrome-plated plastic. It feels very fragile, and on close examination looks cheap. Either use metal, or use high strength plastic with brass fittings for all the screws. Antec’s MX-1 has very little metal, but the plastic is rock-solid unlike Coolermaster’s plastic. High-stress bits like clips should *not* be molded into the craptastic silvery plastic. I nearly broke the crappy chrome-plated plastic taking the case apart initially.

The real question, of course: will the Coolermaster last at least as long as the hard drive it encloses? I’ll have to wait and see, I guess… 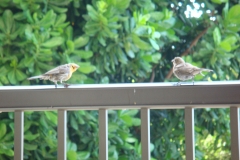