END_OF_DOCUMENT_TOKEN_TO_BE_REPLACED

Apparently, elephants in India are getting drunk, and Paris Hilton wants us all to do something about it.

END_OF_DOCUMENT_TOKEN_TO_BE_REPLACED

I am sitting here in the gathering dark as our short winter day comes to an end. We had a serious wind storm here during the night and into the morning, and around 9:30 am or so our power failed. It is a bit past 4:00 pm now.

END_OF_DOCUMENT_TOKEN_TO_BE_REPLACED

I realize that the American legislative and judicial system is flawed. Money drives both systems: lobbyist groups can “encourage” legislators to re-write laws to suit them, and wealthy individuals or companies can sue the innocent and wronged into oblivion before their case is even heard in a court.

END_OF_DOCUMENT_TOKEN_TO_BE_REPLACED

November 11, 1918: the signing of Armistice, the end of the War to End All Wars…only it wasn’t. Millions have died in wars since, and millions will undoubtedly die in future conflicts.

Remembrance Day is the the time we take each year to contemplate the men and women who went to war and still do today so that you and I can live in prosperity. Those who came back broken in body and spirit, those who came home changed in ways I can only begin to imagine, and those who made the ultimate sacrifice.

END_OF_DOCUMENT_TOKEN_TO_BE_REPLACED

Even though I’ve sipped the Apple Koolaid, I still really, really don’t get the iPhone mania.

END_OF_DOCUMENT_TOKEN_TO_BE_REPLACED

I have talked here recently about my difficulty resisting the left over halloween candy. But for those who have no such concerns, and for whom money is no object, there is the world’s most expensive dessert.

END_OF_DOCUMENT_TOKEN_TO_BE_REPLACED

I’ve been hearing about how the various instant messaging platforms are going to interoperate“any day now” for several years. But it always seems that the various players involved never quite get it together. Windows Messenger connects with Yahoo! Messenger, but not AIM. iChat connects with AIM, but not Messenger. Jabber connects with everything, but not enough people use it.

END_OF_DOCUMENT_TOKEN_TO_BE_REPLACED

Every year we buy more halloween candy than we give out. That’s great: I like the little snacks. 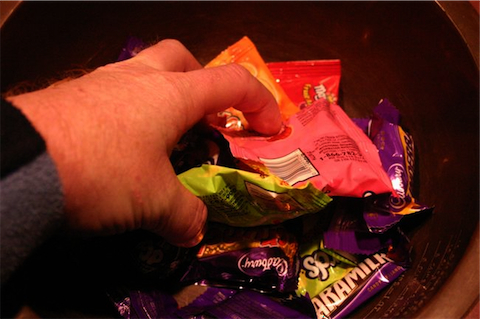 And every year I grab a handful (or two, or three…) of the stuff every time I sit down in front of the TV. So, there I am, feeling overweight and lazy, eating hundreds of totally empty calories. I feel this strange compulsion to eat the stuff as fast as possible, so it is gone and no longer a temptation. But wait a sec- whether I eat it in one week, or eat it in six months, I’m still ingesting the same calories.