I’ve been playing with my XBox 360 quite a bit lately.  One of the features I enjoy is it’s online match up, content, and “game tracking” service, XBox Live.

I originally signed up with XBox Live when I bought my original XBox (I.E.: before I bought the 360).  It was really a poor investment- I played the old-style XBox for about three weeks, and bought (and renewed!) a full year subscription to XBox Live.  That’s two years of XBox Live, and I’m really only starting to use it now.  You  might be asking…what is XBox Live?  And why would I care unless I have an Xbox?

XBox Live is, as I mentioned above, an online (Internet broadband) service for finding other game players to join for particular games.  It is also like a purpose-built website for finding content: downloadable games (free or for a fee) and expansions, game graphics and trailers, and some things like a few movies.  Supposedly there will be more movie and TV content later, but there isn’t much to speak of now.  But the thing I really hadn’t thought much about at all is the “game tracking” aspect.   The minimum service, XBox Live “Silver” is free- but if you want all the features you pay a fee and upgrade to XBox Live “Gold”.  The fee is reasonable, at least by my standards: about $60 a year, or $5 a month more or less.

Games that are “XBox Live” aware will log in to the service when they start with your personal nom de plume (gamer tag).  As you make progress through the game, your achievements (unique to that particular game) will be tracked.  You can then choose to share your achievements by directing people to your personal achievements page, and via status banner graphics you can include in your web page.  Microsoft approved third parties (I.E.: MyGamerCard, a free service) can also be used to provide more enhanced views of all the achievements data.   Folks can use MGC, for example, to see lists of who is playing what games at a given instant in time.

If you look at the right side of this blog, for example, you’ll see my gamer card.  It looks sort of like this:

The top part shows you my gamer tag: AgingGamer.  To the right is when I was last “active”: in the above graphic, it’s 22 hours ago.  Below that is my reputation, which is a representation of how other players in multi-player games have rated me: I haven’t had any ratings at all, so I’m at the default 3 stars.  Then you see my country flag, and how many achievement points I have (490 in the graphic above.  My “zone”, recreation, tells you what type of gamer I’ve identified myself as.  And below that are icons for my most recently played five games.

If you click the image in the banner at the right (*not* the one above), you can make it active- then clicking on various parts of the image will get you more information.  If you click on my gamer tag (AgingGamer), for example, you’ll go to my detailed stats page.  It looks something like this: 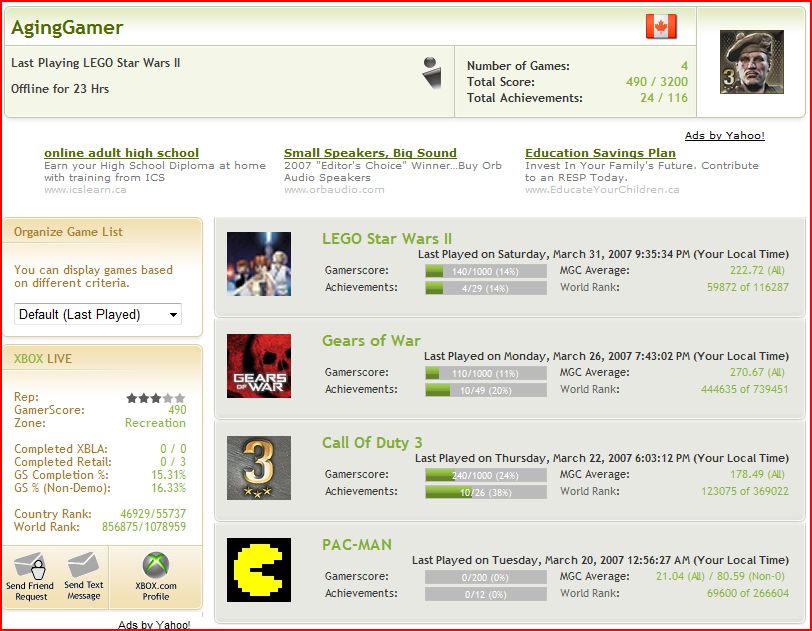 The details include my ranking versus all players of a particular game (E.G.: I’m 59,872 of 116,287 players of Lego Star Wars II).   Of note is the fact that my Gamerscore and achievements for each game are in the range of 15-20%.  This is despite having played all of the the three games in my details above for quite a number of hours.  “Completion” and “achievements” go far beyond simply completing the game in the traditional sense.  Getting all 29 achievements in Lego Star Wars II, for example, would mean playing through every level several times with different characters.  Many of the Gears of War achievements require massive investments of time in online multiplayer games: hundreds of hours.

All of this is interesting (well, to me at least), but I was slightly surprised by two things.  First, getting an “impressive” Gamerscore on XBox Live appears to be something of a meta-game in itself.  There are leaderboards showing global points races, folks with 50 or 100,000 gamer points gained by playing dozens of games in excruciating detail.   Getting Gamerscore points appears to be so important to some players that games that don’t properly support the Live achievements system get less interest from the market.

Second…I sort of find the points tracking system really does encourage me to go back and replay some games that I might otherwise have considered “finished”.  That part really surprised me: I honestly didn’t see much point to the achievement stuff if I wasn’t using it to “compete” with other folks (something which doesn’t hold much appeal for me).

Now…back to a question I mentioned early in this blog posting- if you don’t have an XBox, why would you care about XBox Live?  Well, perhaps because Microsoft is re-creating it as “Anywhere Live”.  Anywhere Live opens the Live features to folks on other platforms, most notably people with Windows Vista.  If you have Windows Vista or are thinking  you will one day, and if you play games, chances are that at least some of the games you play will support the Live service.  This means being able to track your game accomplishments compared to others, or find others playing the same games as you to join in a multi-player session: all via a single common interface regardless of the game.  Furthermore, if you already have an XBox and have signed up to XBox Live Gold, you automatically have support for your PC with the same service for the single fee you’ve already paid.

The first PC games supporting the Live service will be released within the next few months.  Halo 2 for the PC is expected in May and will track accomplishments on-line.  It won’t allow “mixed” game play between Halo 2 on the XBox 360 and the PC: that’s a choice the game developer makes.  Shadowrun will be coming sometime later this year as well for both the PC and the Xbox 360, and in that case head to head competitions involving players on both platforms will be fully supported.

No one can say in advance how common support for Live will be in future PC games.  I would say that it works well, significantly better than any of the matching services I’ve used before like GameSpy.  And the achievements data system and ranking websites could have a somewhat viral effect on game developers and players alike.  Games that don’t support the Live service in the future could suffer if PC gamers start comparing their achievement scores like they do on the XBox.