This can be filed under the category of “Very Old News”, but sometimes being late is stylish, no?

I’m playing Tomb Raider: Legend on my 360 and am very pleasantly surprised by the quality of the game. The last time I looked at a Lara Croft title, it was a poorly controlled mish-mash: basically, nothing I could recommend playing, so much so I can’t even remember which release it was.

This latest release (about a year old now), however, is brilliantly done. The puzzles seem very “real” to me: physics tricks, using realistic mechanisms and objects that belong where they are found. Some of them take me a while to solve, but thus far (about 40% of the way through the game), I haven’t found any that have made me too frustrated. Lara’s climbing and gymnastics are first rate, and one thing I rather like is the fact that each puzzle is quite solvable: if you look around carefully, you can see logical paths to follow that make sense.

The control mechanisms are great, at least with the XBox version. Camera control is nearly complete, which is nice, and there is a cinematic feel to all of the locales. One of my favorite “technical” features is the fact that you can have multiple save games. The graphics are all near the top of the art form: beautifully rendered, without attempting to go too far to realism. There are also some very nice visual effects: blurs and lighting, things like that, that make the world more like a movie at times.

Speaking of movie effects, the voice acting is great: Lara herself is nicely voiced, and Lara is in nearly continuous contact over her headset radio with her support team. Zip and Alistair add comical comments without being too goofy: although they never really directly participate in the plot, I found myself looking forward to their interjections.

Lara herself…well, as always it is obvious that the game’s visual artists invest a ton of time perfecting her. Of course her proportions are unrealistic, but the way she moves, how she shifts weight when swinging from a bar or hanging by her fingertips, the occasional “twitch” (random motion) as she’s standing…I particularly like it when she swats at a fly or decides to re-tie her boots. I also got a chuckle out of one scene where she is at a party in a very slinky black dress, which she subsequently splits open at the sides to accommodate her guns. I still don’t know where she hid her huge 9mm sidearms…. A few minutes later, with an automatic rifle strapped on her back and several hand-grenades hanging at her waist…the little black dress reborn as combat wear 🙂

If you liked the old Lara Croft games, I think I can reliably say you’ll enjoy this episode as well. It’s available on almost every platform, and probably is on for a special price- I got the XBox version for $20. Best of all: I get to tell my wife “I’m going now to stare at Lara’s butt” without getting yelled at… 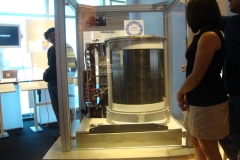