I’m not exactly known for my patience.  You could probably find my picture next to the Wikipedia entry for “instant gratification”.  If I decide I want a gadget, I’ll usually mull it over for some months, but when I make the final decision…there is no hesitation.  Don’t stand in my way in Best Buy…several Sales Associates have tried that, and they are still recovering.

Some months ago I decided I wanted Windows Vista.  I was performing my annual computer upgrade, and Vista was Release Candidate 2 at that point.  Unfortunately, it wasn’t working with my games at the time.  I had picked up an interest in Second Life, and Second Life (along with a number of games by ID and other manufacturers) requires OpenGL drivers.  Early in Vista’s development, there was some doubt about support for OpenGL, but apparently that was all resolved early in 2006 with Microsoft incorporating full support for native OpenGL drivers through the use of installable client drivers (ICD).

This ICD thing is great news- it means that the video card drivers just need to provide the appropriate OpenGL drivers, and Vista will work with them.  NVidia responded with Vista beta drivers back in September that included this support.  ATI, despite claiming to be ahead in terms of Vista support, did not.  So, in the absence of any real alternative, I shelved the idea of installing Vista for the moment and started to wait for ATI’s release of ICD drivers.

Since then, Windows Vista has been released to manufacturing.  It will be released to the public at large late in January.  That means there isn’t much more than a month to go before the floodgates open.  NVidia has had a couple more beta releases with OpenGL ICD drivers that work with Vista.  But ATI?  Not even one…nothing so much as an early OpenGL beta, or even some word of when they might finally release one.  Instead, absolute silence on the subject.  And in the interim, they’ve had two more releases of their basic Vista video driver, so it’s not like they’ve been standing still.  With each release, I look at the release notes and am saddened to read this:

The lack of a beta OpenGL driver from ATI at this point is distressing.  But even worse is their silence- if they said “it will be here in January” instead of just “It’s not supported”, I’d breathe a sigh of relief.  But as it is, I’m wondering if I’ll have to seriously consider replacing my video card in the new year with an NVidia card.  That would be unfortunate, since I really do like ATI. 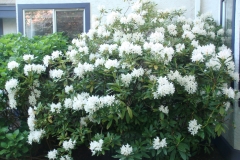