As I mentioned in my last post, I had a CT scan today. It was actually kind of fun, and a lot faster than I expected.

My scan was of my upper spine, from my skull down to just below the shoulder blades. I didn’t have to undress or put on one of those funky hospital gowns or anything- just take off my glasses and watch, lay down on a bench, and let the technician do her thing. This is a picture of a scanner similar to the one that I saw today (same brand and I think the same model- this is just a miscellaneous picture I found on the web): 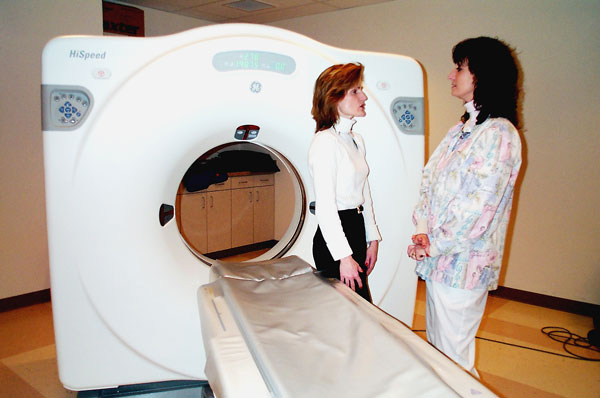 The process itself was painless. Since the scan was focused on my spine, I didn’t need any kind of contrast solution injection or anything like that. I was a bit clumsy laying down on the bench itself: there was a sort of head rest thing that holds your head somewhat snugly, and I missed it on my first try. Once I was lying down, the tech put a little strip of some kind over my forehead: I’m not sure what that was for, certainly it didn’t hold my head in place, so I’m guessing it was some sort of reference strip for positioning or aligning the machine. The bench rose up to align with the donut-shaped scanner itself, then slid a bit back and forth (I guess so that the technician could check my position).

The technician then went to the operations booth, letting me know that she’d run a few tests before starting the actual scan. The bench I was on slid slowly back and forth through the scanner, and I was able to get a look at the inside of the “donut”. I was initially a bit surprised to see that there was a glass “window” on the inside of the ring. I assume the glass passes xrays more completely than say translucent plastic, but the glass gave me the benefit of being able to see the innards of the machine a bit. Unfortunately, there wasn’t much to see: several things that sort of looked like lenses flashed by on some sort of spinning armature. A moment later the technician asked me to refrain from swallowing and to hold my breath, and at that point I could hear the spinning mechanism inside the ring speed up a bit. It didn’t sound super fast…more like washing machine speed rather than jet turbine, so I’d guess something less than 100 RPM (but I could be completely wrong). A few seconds later the technician said I could breathe again, which was handy since I was not doing too well holding my breath with this cold. She came out and checked the scan (or I assume that was what she was doing) for a moment, then told me I was all done.

Netting it all, the process took less than 15 minutes. It was actually easier and faster than the traditional X-Rays I’ve had in the past. The staff in the Diagnostic Imaging area at Langley Memorial were cheerful and efficient. They also appear to have a sense of humour: hanging on the big door into the CT scanner room was a cartoon showing a nervous patient lying on a bed with a couple of technicians standing by: one tech is reassuring the patient, saying it was normal to be a bit nervous during a first cat scan. The other technician in the cartoon was holding a cat starting down at the patient through a pair of binoculars 🙂

7 thoughts on “The CT Scan experience…”