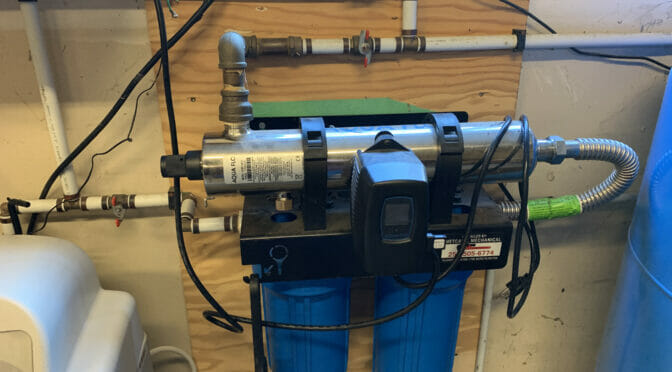 The cold has done some mischief to our plumbing here.

The same laundry room pipes as last year froze up first. Not great, but increasing the house temperature from 20 degrees to 28 degrees C and setting up some directed heaters will (I hope) eventually unthaw that. But then we made things worse.

Irene got an Acura navigation computer software upgrade for Christmas (hey, it’s what she asked for) and wanted it installed… on the coldest day of the year so far. According to the instructions, the car must be kept running during the install to avoid draining the battery. I foolishly followed the instructions without thinking and opened the garage door. This resulted in the garage interior getting below zero, which froze our main water feed from the well.

Irene’s car was demoted to sitting outside while the navigation upgrade completed, and I set up heaters in the garage. An hour later, success: the water was flowing again. Problem: it is spraying out of the water purification system, specifically out of the UV purification chamber.

I shut off the main water feed, then spent 20 minutes or so solving one of those pipeline games where there are a dozen pipes with cutoffs and the challenge is to get the water flowing while cutting off the purification system.

With the water no longer fountaining all over the floor from the purification system and ‘normal’ water flow into the house, I was able to do some ‘diagnostics’.

The water filter system- an Aqua-Flo Model GEN5-8R12- has a UV purification chamber. The chamber consists of a stainless steel cylinder with a water-tight quartz pipe down the middle. The UV light fits into that pipe. Except the water was spraying out from where the UV light fits in: water where there isn’t supposed to be any.

I pulled out the UV light: it looks to be toast- exposing a delicate light bulb suddenly to a flood of water does not turn out well. I then removed the quartz tube, and it was clearly broken- a portion of it remained behind in the purification chamber.

24 hours after this all started I’m sitting in a sweltering hot house drinking unpurified water, waiting for a call back from a plumber. Most of the water has dried out of the garage. The pipes to the laundry room are still frozen.