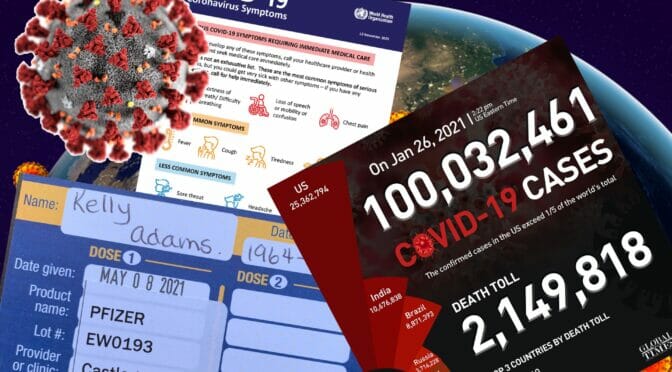 Today I received the first of what should be two vaccinations against COVID. This has caused me to give some thought to how I got here, and what the world has gone through during this first pandemic of the 21st century.

I read the articles in January 2020 about the new coronavirus that was appearing in Wuhan, China. My first thoughts were that this was likely going to be like SARS: a big fuss over not very much. SARS only infected 8,000 people or so: less than a thousand died. That’s what I expected from COVID.

Boy, was I wrong…

The COVID numbers in China were bigger than SARS pretty quickly after it was identified. I thought it was pretty amazing that China was able to sequence and share the genetic code for the virus so early on. But then towards the end of January the entire population of Wuhan was locked down: tens of millions of people. This was when I realized that COVID was something different.

It was spreading far faster than SARS ever did. 10,000 people were infected in that first month, and it looked like containment was broken. Shortly thereafter, by early February, cases were appearing that could no longer be traced back to the origin: this suggested silent transmission was occurring.

Then there was the cruise ship off Japan with over 600 cases, and finally the disease reached America. On March 11, the WHO declared COVID 19 a pandemic.

By March I was 100% certain that we were seeing something unprecedented. The idiotic response of the American government began to make me worried. I became sure that the fatalities might reach into the hundreds of thousands as the Commander in Tweet declared that the “China Flu” was nothing, not a problem, it was all going to be gone by April. By April, Cheeto Cheeks was suggesting injecting bleach or getting sunlight ‘up inside’ might be the cure.

And tens of millions of Americans bought into the idiocy, along with far too many Canadians. As governments tried to slow the spread with lockdowns and social distancing, there was a continuous susurration of “it’s no worse than the flu…” and “wearing a mask infringes my rights.” The spread continued, and the numbers kept racing upwards.

COVID took over two million lives by the end of 2020, with over 100 million infected.

Science proved itself more than capable of facing the challenge. With a fully sequenced genetic code for the disease, scientists were able to devise not one but several effective vaccinations. Even more amazingly, they were able to complete convincing test protocols and navigate the approval bureaucracy all in barely a year.

This caught me off guard. I was fully expecting to have no viable vaccine for COVID throughout 2021. If I’d been right, we might have seen a death toll exceeding ten million. Here in the safety of my small community in Canada, working from home with very limited exposure, I have been comparatively ‘safe’. But getting the vaccine so quickly still feels like a tremendous gift.

How it ends… maybe

I feel incredibly fortunate to have lost no one in my immediate family to COVID-19. I’ve experienced no great hardship, other than not being able to hug my Mom in her care home. In some ways COVID has indirectly benefitted me- the new work from home standards have allowed me to relocate to a smaller community and continue my job.

But I still am feeling the pain of a world that has experienced a tremendous upheaval. I want it all to get ‘back to normal’, or at least some semblance of normal. So for me the COVID-19 vaccination is a precious thing. A first step from being in thrall to am illness that could take away someone I love simply by me being inconsiderate.

Yet the vaccinations aren’t going to be enough. Not because they aren’t amazing: they are, 90%+ effective with minimal to no risk. Instead the real problem is, as it often is, the human factor. The tens of millions of people who still believe in their Orange Messiah’s teachings, or in the Q-conspiracies, or in their fear of science. These millions won’t get vaccinated. They won’t wear masks. And they simply don’t give a damn about anyone else.

Even with the marching morons, I still think we’ll be in a post-COVID world late in 2021. COVID won’t be ‘beaten’, but it will be muzzled. Until the next pandemic…