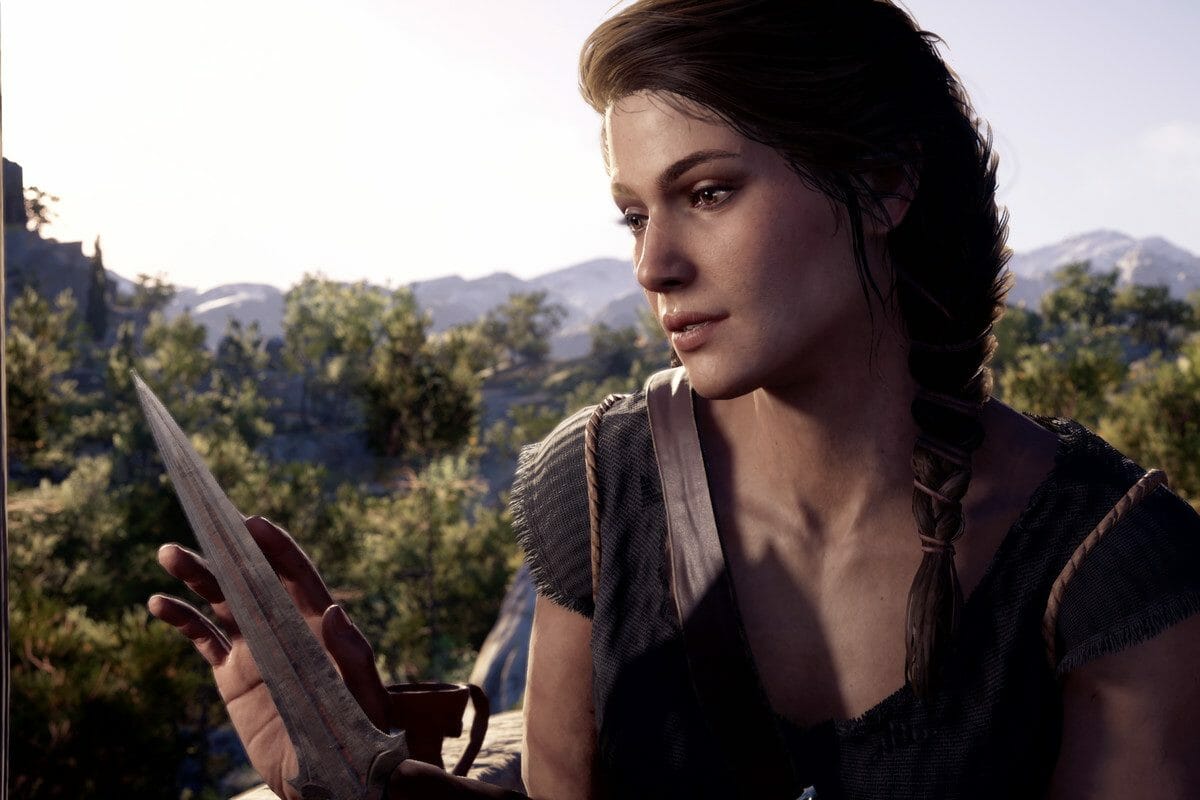 Kassandra: looking all moody as she contemplates who to kill next…

If you enjoyed Assassin’s Creed Origins, you’ll find a lot to like in Odyssey.  Set a few centuries earlier, during the age of ’This…Is…SPARTA!’ (around 430 BC; the Peloponnesian War), you can choose to play as either the male or female descendant of Leonidas I.  I picked Kassandra, the female descendent because, quite frankly, I’m tired of the ‘bro-dudes’ in a lot of games.

But Kassandra is not shy about getting her hands dirty.  Nor is she a ‘girl’ in any kind of negative sense: this is a strong, well realized (by video game standards) woman who kicks ass and takes no crap from anyone.  I like her as a character.  I also like that she towers over most of the other characters in the game, and has more than enough muscle to be convincing throwing someone across the room.

Gameplay is familiar, but different again from even the most recent entry in the AC ‘family’ of games.  The ‘game as history teacher’ mode of Origins is gone: this is a loss, but not one that greatly influences my like or dislike of the game.  Added are a number of RPG elements such as ability trees including both active and passive skills.  The big change is the inclusion of more detailed gear statistics, including bonuses for certain play styles.  And all gear now has ‘levels’ that control damage and armour statistics.  Similarly there is a lengthy upgrade tree for the ship you’ll command.  This is interesting and fun at times, but remember this gear/equipment ‘scaling’: it will be referenced later.

Also new in Odyssey is the sheer size of the world, and the ridiculous amount of ‘content’.  The map is gigantic, with huge sections that I still haven’t visited yet after over 50 hours of play.  There is now a complete ‘meta-game’ relating to the various powers and their regional influence: you can gradually weaken a side in a region by attacking their forts and supply lines, then take a side in a battle for control of that area.  And as a mercenary you can switch back and forth between sides at will: so far as I can tell, it has no real influence on the outcome of the game.  Additionally, there are a couple of ‘ladder’ challenges in the game, one against other NPC mercenaries, another against the hierarchy of a cult in the world bent on world domination.  All of this is coupled with a ‘auto-levelling’ system: as you increase in level, so does (within limits) much of the content.  Every foe will level up when you do, up to a certain ‘level cap’ for their range.

To be honest, all this ‘content’ is a bit overwhelming.  It is especially overwhelming when you realize how much grinding you’d have to complete to keep up with even part of what is on offer.  And here is where some of the less desirable traits of the game appear.

The Grind… and my Pay to Win Journey

As mentioned earlier, gear has levels and statistics, and similar progression exists for your ship.  This is fine and dandy, except that it is easy to ‘out-level’ your gear.  And having (for example) a level 20 sword when you are level 23 has a quickly obvious impact on your progress.  Remember, your foes level up along side you, so if your level gets ahead of your gear, you will be at a significant disadvantage.  Even a couple of levels makes the difference obvious.

But this is easily fixable: you just need an absolute metric ton of money and materials.  By level 20 I was constantly out of both cash and the less common upgrade components used for weapons and armour.  I could solve this problem too: by spending hours and hours completing small ‘side quests’ such as mercenary missions you can pick up from message boards scattered around every city and town on the map.

But these ‘message board’ missions are  repetitive, pay small amounts, and after a while are pretty boring.  As an example: I have a sword, a set of knives, a bow, and four pieces of armour to upgrade from level 20 to 23.  Gathering the materials by completing side quests to upgrade would take (roughly) two hours per piece: that’s about 14 hours to upgrade my gear.  During which time I can’t really complete the ‘main’ quest missions very effectively.

You have another option: re-equip using random (lower quality, but higher level) drops.  But Ubisoft has done a good job making this workable, but not great: it is always better to upgrade legendary gear to increase its level than it is to take higher level ‘common’ gear that you find lying around.  For me, this started becoming frustrating around level 20, which is perhaps 30% of the way through the game.

But there is an easy fix, available right there in the online store: pay for packs of in-game money and crafting materials.  About $20 buys you enough money and materials to feel reasonably ‘flush’ for three to five levels.  But it feels… dirty.  And the ‘pay for in game cash’ micro-transactions are just a tiny part of what is on tap: you can pay for permanent or temporary boosts to experience, for both cosmetic and practical gear upgrades, for mounts, for ship improvements… basically, shop til you drop. 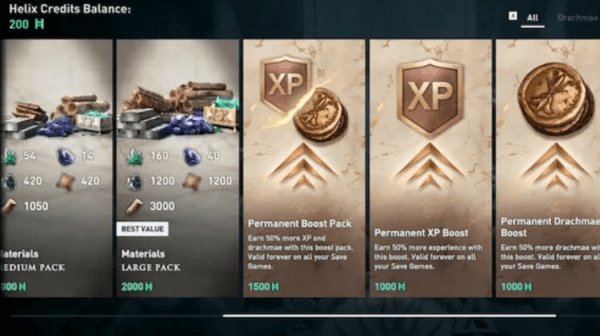 I’m sorry to say that I caved: I have more disposable money than some players, and less time.  And it’s a single player game, so who am I really hurting?  But still… it feels wrong.

Ubisoft isn’t ‘evil’, and I’m not planning on boycotting them or their games.  But I do find the ‘creep’ of micro-transactions to be disheartening.  I have myself and people like myself to blame.  I can also blame people who are unwilling to pay what a triple-A game really costs to make at retail: we’ve been paying $60 a game for at least twenty years now, which is amazing in a world where nearly everything else has seen a price increase of 50% or more in that time.

Assassins Creed Odyssey is completely playable, fun, and well worth the money when you completely skip the ‘pay to win’ features.  It is just frustrating at times, and that ‘frustration’ is well played- they know exactly the right strings to pull to get folks with a bit more disposable cash to part with it to save some time and reduce the grind.  And that is truly a bit worrisome.