In the ‘better later than never’ category, I present- the motorcycle road trip I took for 2018: 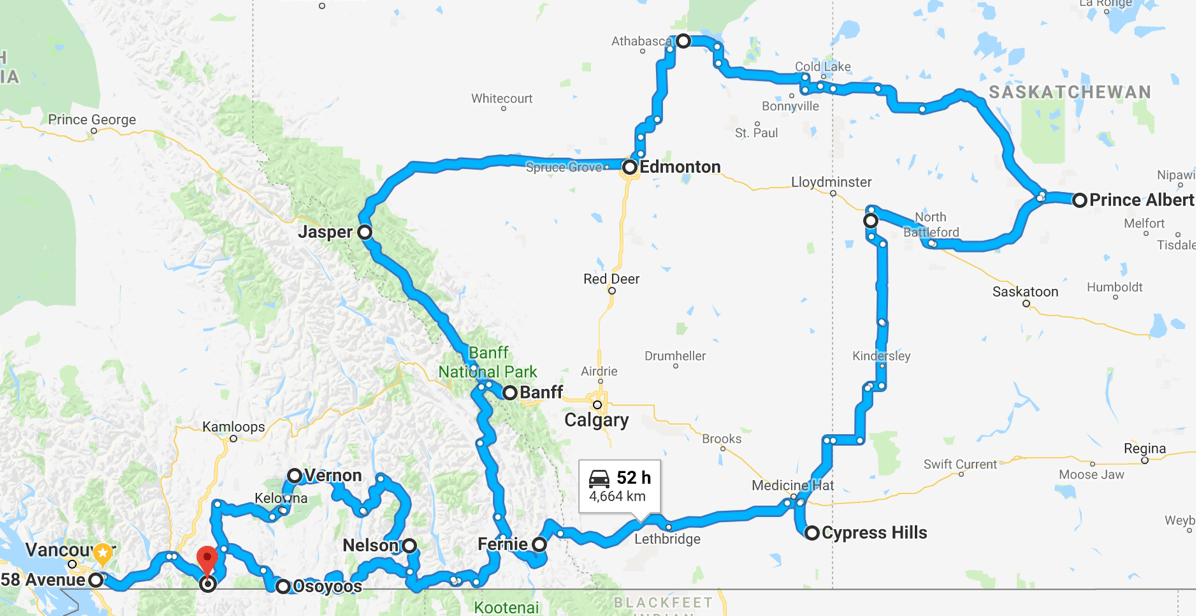 This year’s ride was a bit of an exercise in revisiting personal recollections.  Cypress Hills became my primary objective for reasons that only make sense in the context of my childhood.  My Mom took me to visit my Aunts, Uncles, and Cousins in Saskatchewan more or less annually when I was between the ages of 6 and 12.  One year, we stopped at Cypress Hills and, to me at least, it was like a little slice of heaven.  I had never experienced mountains at that point in my life, and knowing South Saskatchewan my young self was completely blown away by the amazing ‘pocket’ of almost-mountains that this small park encompasses.

But I had to wonder:  how much of what I remembered from over forty years ago was true?  Were the Cypress Hills really as surprising and interesting as I recalled?  And since I was heading towards Saskatchewan, I might as well explore parts of that province I’d never seen during my childhood trips.  Oh, and on the way back I should visit my friend Chris in Edmonton, and maybe see if I could meet up to ride with my brother Colin for a few days.

The day before I started my ride, both of my knees ‘blew out’ i.e.: became painful and swollen- this happened while I was mowing the lawn, of all things.  I had to make a last minute run to pick up a pair of knee braces and hope for the best.  Thus started my rather odd road trip for 2018.

The ride to Cypress Hills

I made the trip to Cypress over three days, stopping in Osoyoos and Fernie along the way.  The first two days were lovely, but Alberta took the opportunity on the third day to remind me of what a prairie storm is really all about. 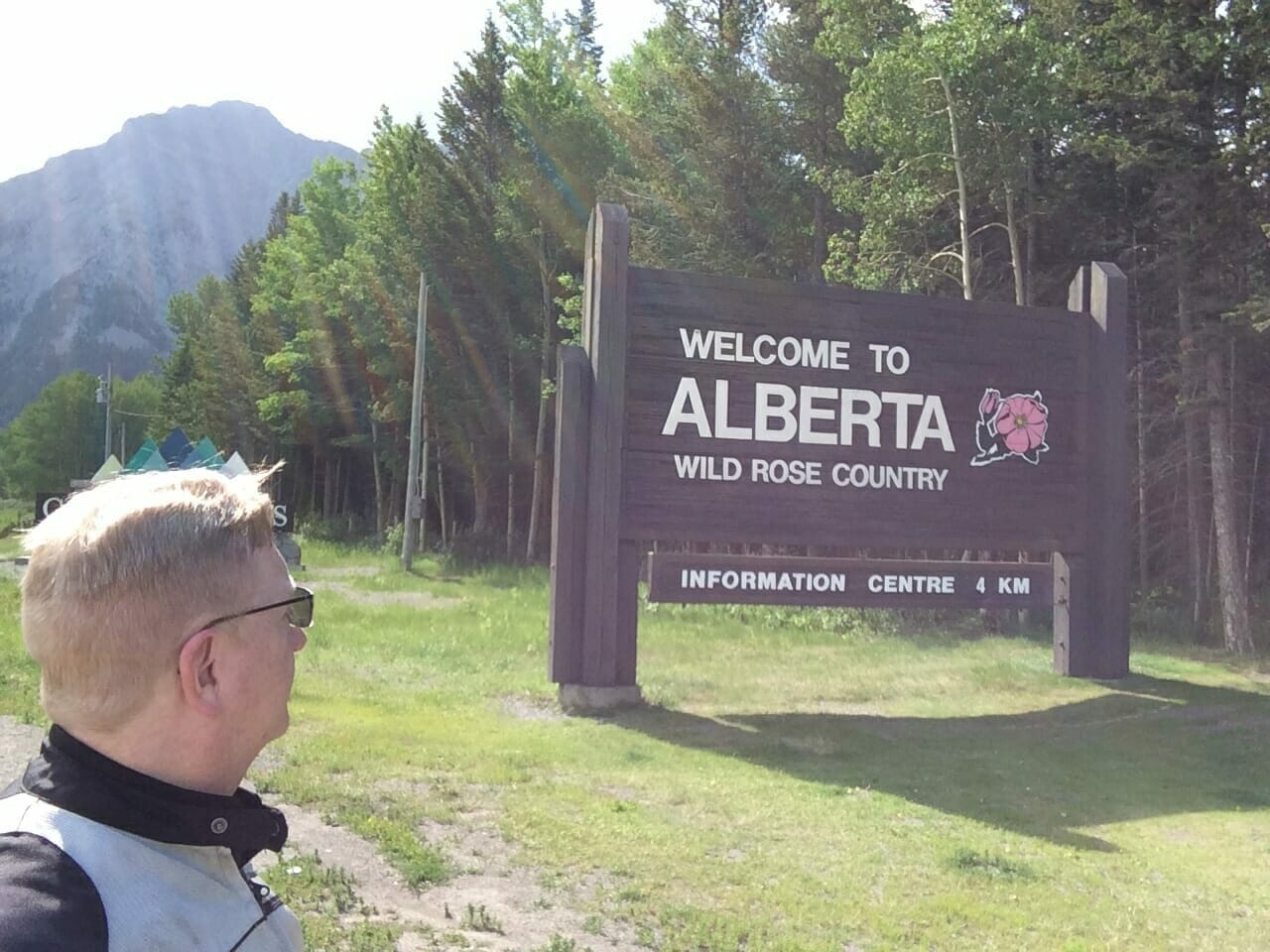 I rode through Medicine Hat with 100+ km/h gusts, flanked on both sides by lightning and nascent funnel clouds.  At times my bike was at nearly a 30 degree angle to remain going straight in the cross winds, and I ended up with a neck injury that took weeks to fully heal.  It was also on this day that I started to notice a strange vibration through the floorboards of my bike, a problem which ultimately was only fixed after I’d completed the trip- more on that later.  The storm broke just as I arrived in Cypress Hills, and the rain-blasted plains gave way to the forested hills of the park I remembered. 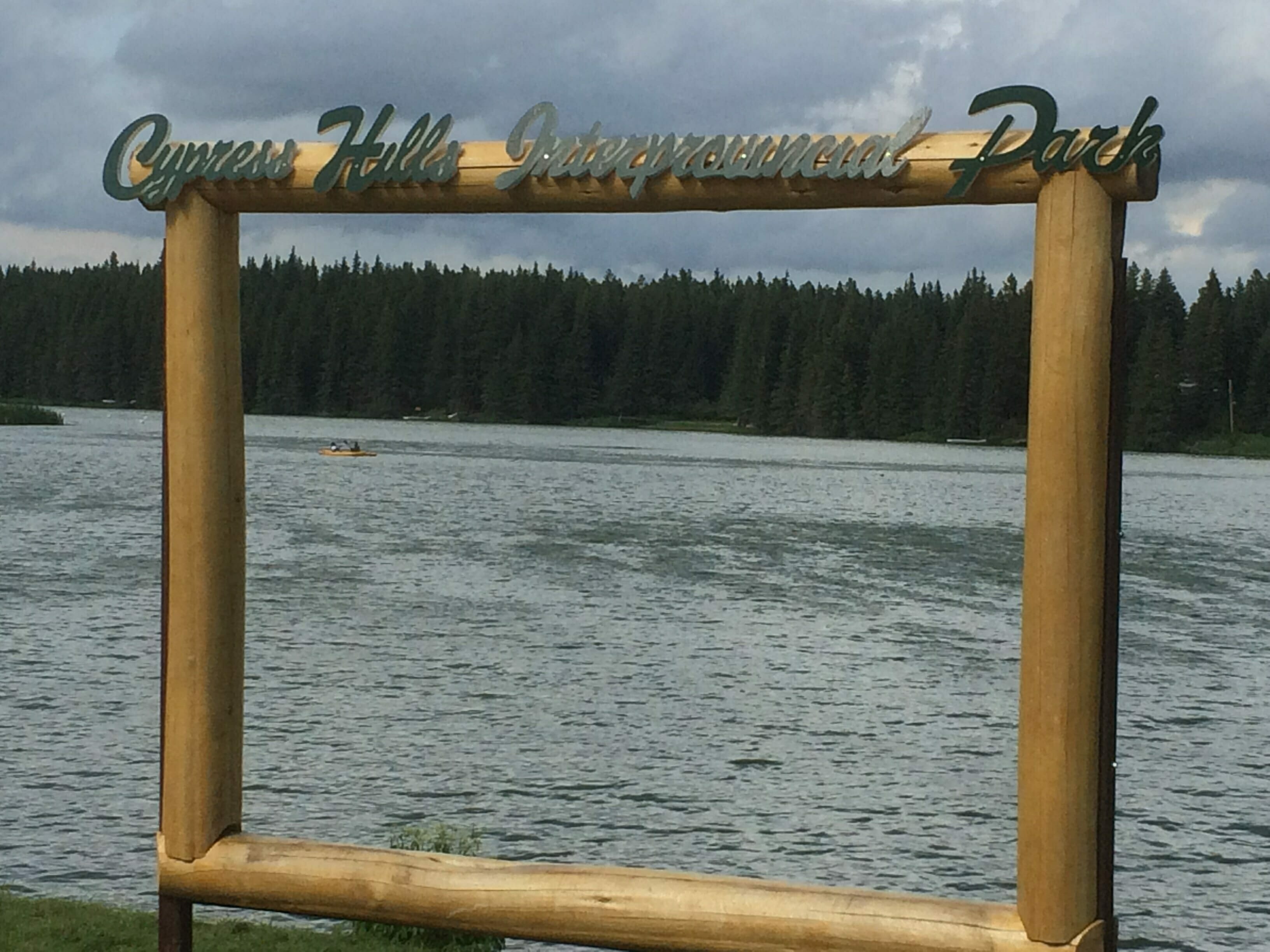 I spent two nights at The Resort at Cypress Hills, which turned out to be enough time for me to recover from my rough ride through the storms during my arrival.  It also gave me the opportunity to spend a day walking around the trails and confirming that, yes, Cypress Hills is a beautiful break from the flatlands.  I understand now why I developed such strong memories of this place: idealized, yes, but it is still a remarkable surprise.  I know many people love prairie lands, but for me they never touch my soul the same way the mountains do- and Cypress Hills has that mountain ‘vibe’ that I find so appealing.

I’ve been in Saskatchewan many times, but I’ve really only seen a small part of the province south of Saskatoon.  For the next leg of my trip, therefore, I decided to check out a bit more of the province. My route took me north to Prince Albert, mostly following highways 21 and 40.  I saw towns such as Kindersley, Unity, and North Battleford… and lots and lots of flat land.  To a farmer, this would be glorious, but for me… not so much.  That said, I enjoyed the ride, and learned some things: that I can smell the different crops clearly, that there is a kind of peace to the distant horizon, and that apparently no one rides a highway bike in these parts. 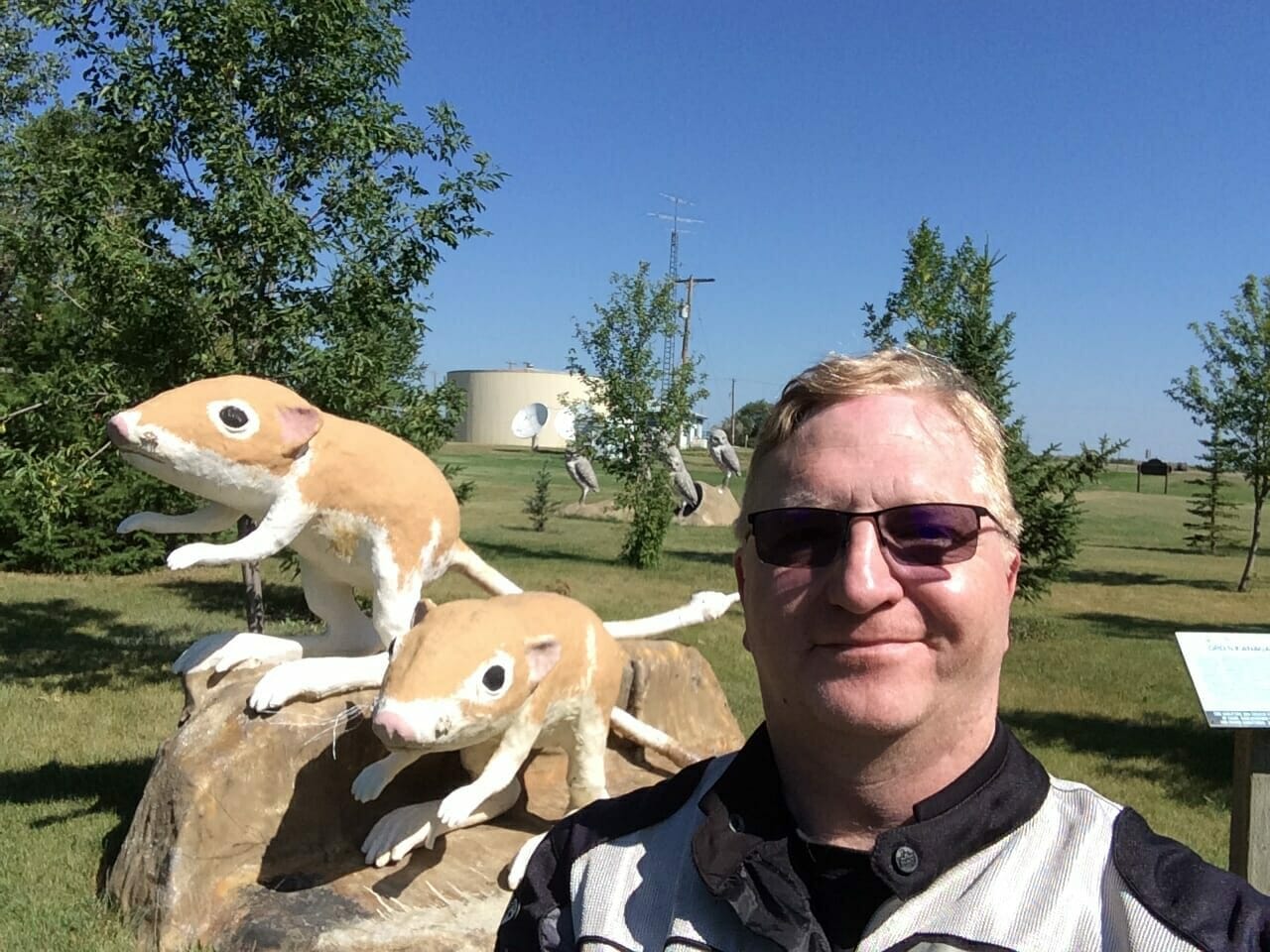 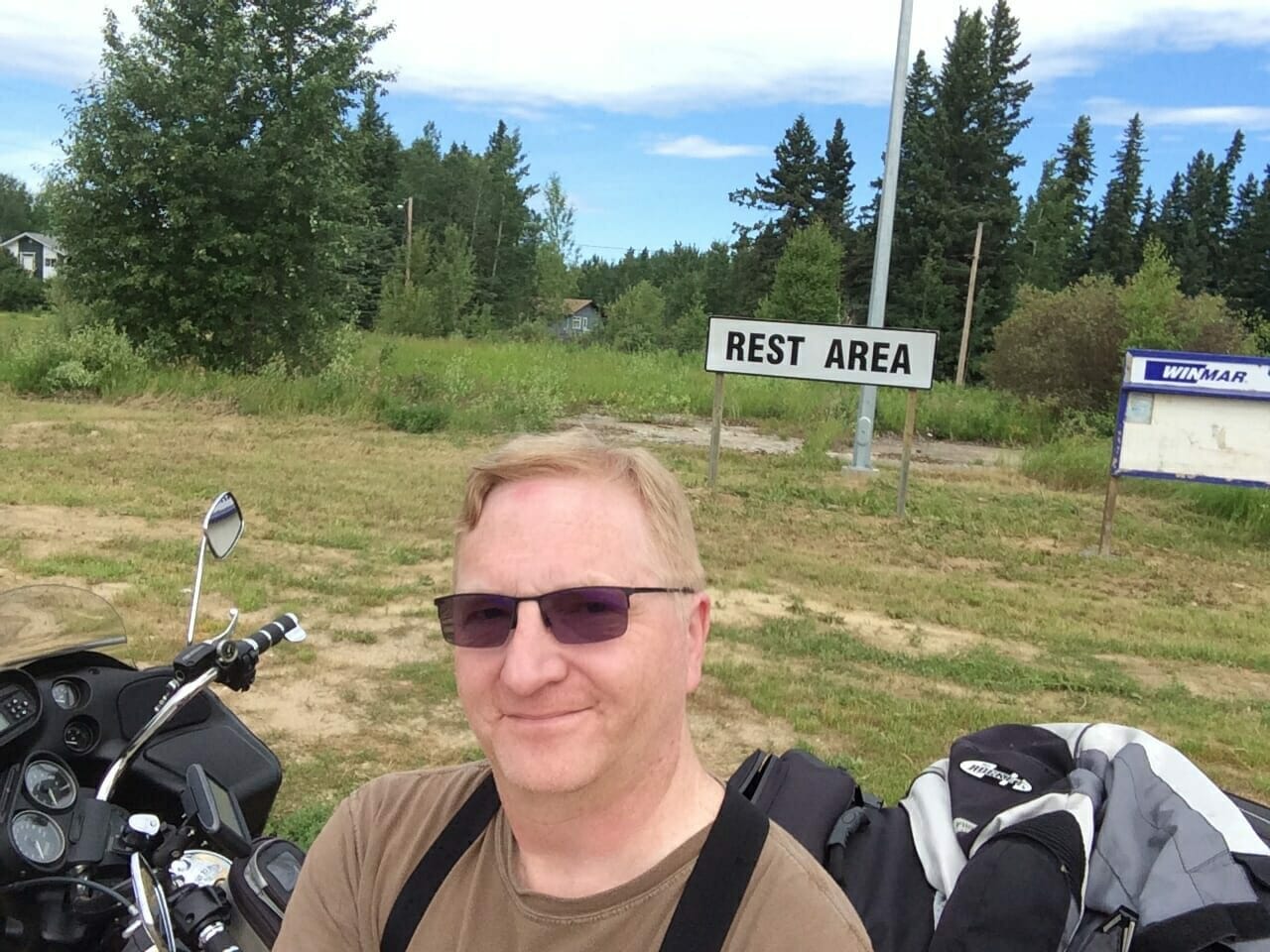 I didn’t follow the ‘straight highway’ from Prince Albert to Edmonton, instead veering further north along Highway 55.  I passed through places like Big River, Pierce Lake, and Cold Lake, ultimately entering Edmonton from the North.  The terrain and scenery was more varied and interesting than my ride through Western Saskatchewan, but I spent a good part of the day riding in rain which made it  less enjoyable than it could have been.

Edmonton to Home via Banff, Vernon, and Manning Park

I spent two nights in Edmonton, enjoying a great visit with my friend Chris and his family including dinner at Bubba Gumps.  Then Colin and I set out on a leisurely ride west via Jasper, the Icefields Parkway, Banff, Nelson, Vernon, and Manning Park.  We spent the night at Manning Park so we could start the last day of our ride together with a quick jaunt up the cliffside to the Alpine Meadow overlook there. 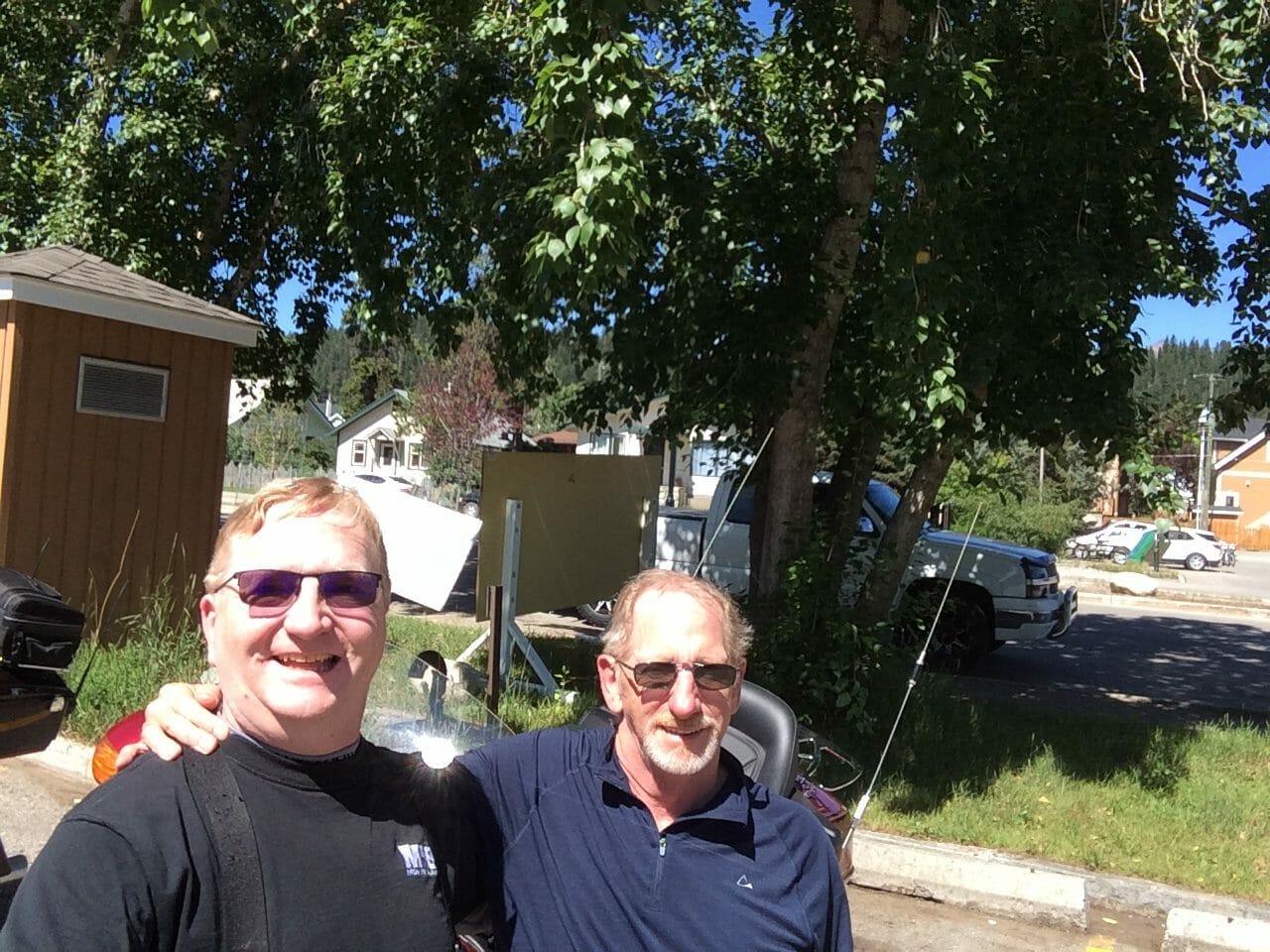 Colin and I smiling

My broken down old body took weeks to fully recover from my ride, but that’s becoming ‘normal’ for me.  My motorcycle, however, gave me a bit of a surprise.  After the trip I took her in to the shop for general service and mentioned the odd vibration I’d noticed mid-trip.  The diagnosis: the rear bearings had seized, so severely in fact that the bearings were melted into the wheel itself.  I had to have the entire rear wheel replaced.  My dealer was able to find a ‘brand new’ 2017 Road Glide wheel from a fellow they’d installed a fancy wheel for, so it was cheaper than it could have been (e.g.: $300 instead of $750), but it was still a bit of a shocker.