My brother Colin and I have started to make going on a motorcycle road trip to gather into an annual ‘tradition’.  This year, our trip was close to home: the Selkirk International Loop. 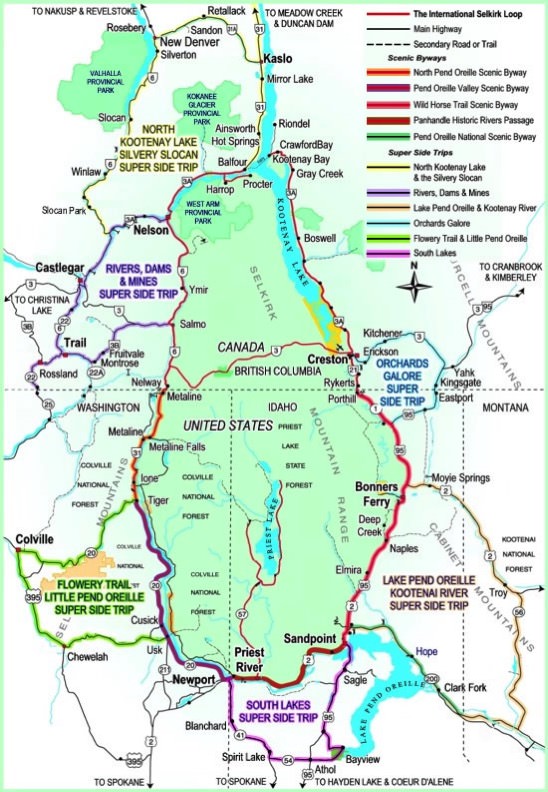 Day one: meet in Nelson

Colin and I met up on  Saturday, August 12, in Nelson.  Our plan was to spend the evening relaxing and then set out for several days of ‘easy’ (short distance) riding round the Selkirk International loop.  The idea was to camp or stay in hotels based on whim, and to go as far as we felt like going each day: in other words, our plans were pretty ‘loose’.

The meeting place was the Prestige Lakeside Resort in Nelson.  The resort is situated right on Kootenay lake and the lakeside rooms have lovely views.  The Nelson tram railway runs right along the roadside in front of the hotel.

I had ridden all the way from home (about 650 km), so I arrived a bit after Colin who had split his trip into from Edmonton into two shorter rides.  Colin and I had an excellent dinner and several cold beers at the hotel’s restaurant and talked about our upcoming ride.  The weather was good, but the air was smokey from the wildfires in BC: the smokey, visibility-obscuring haze persisted throughout our road trip. 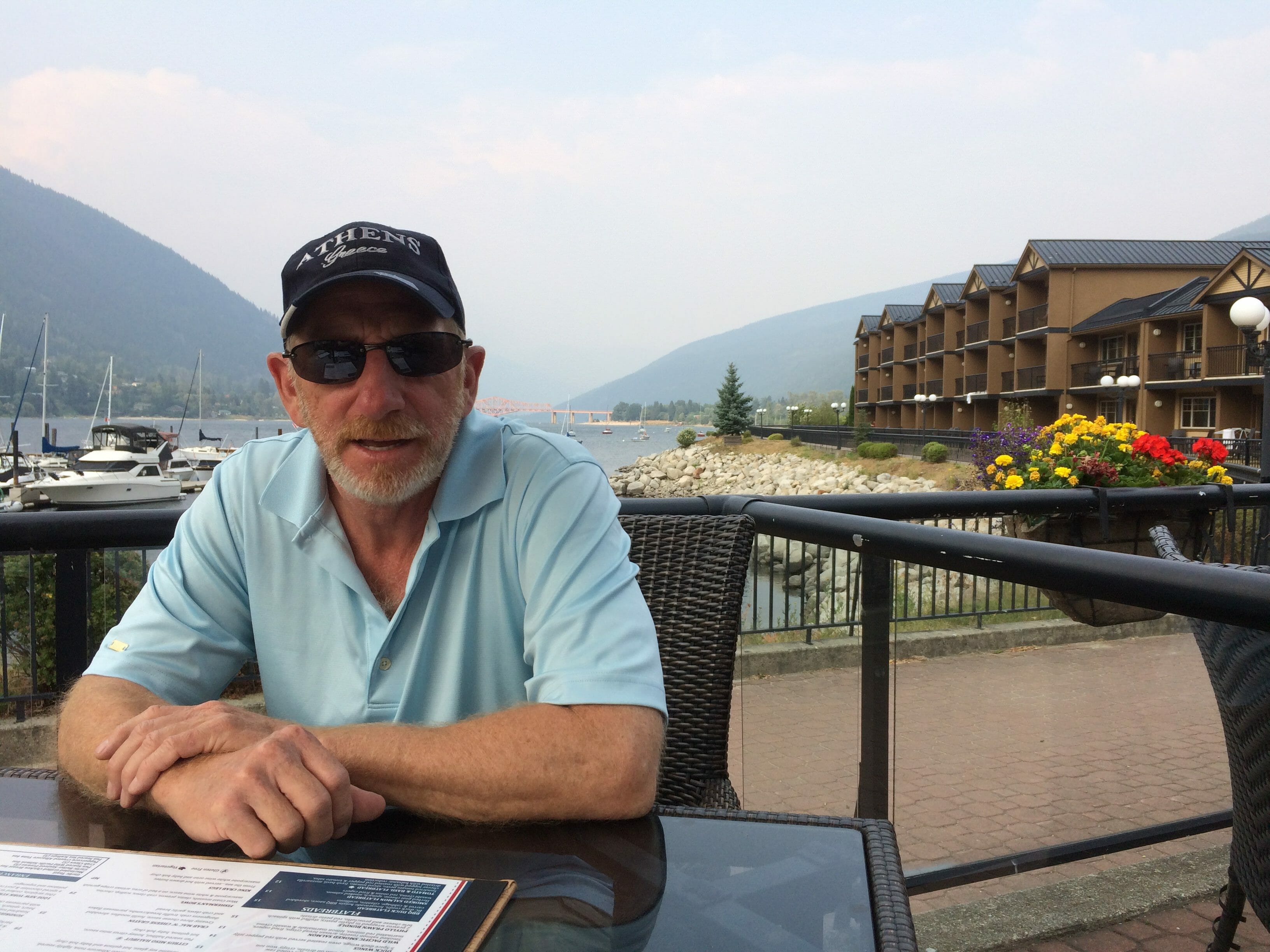 We decided to start our trip around the Selkirk loop by travelling southward on Highway 6 from Nelson, proceeding in a clockwise direction around the loop.  The objective for the first day was to cross the border and find a place to camp somewhere around Cosick or Usk in Washington.  Circumstances changed our plans a bit, however: the Highway 6 border crossing was closed, along with a noticeable police presence in the Canadian side of the border.  We didn’t ask the officers who redirected us what was going on: however, there was a music festival (the Shambhalla music festival) that was wrapping up just north of the crossing that might have been related.

After riding a few kilometres the ‘wrong’ direction on the #3 we stopped, reviewed our maps, and decided to try backtracking a bit using the 3B and then south on the 22A heading towards Northport, Washington.  From Northport, we followed the 25 to Kettle Falls and then out of Colville on the 395.  This put us ‘back’ on one of the Selkirk loop ‘side trips’- the Flowery Trail / Little Pend Orielle Super Side Trip.

The ride was fantastic: we encountered enough rain to justify putting on part of our rain gear, but it was actually refreshing and helped clear a bit of smoke from the air.  The roads were excellent, and the scenery was great.  But the rain was enough to lead us to forgo tents and stay in a motel: we found a place called the Eagle’s Nest in Priest River that fit our needs quite nicely.  We wrapped up our day of riding by about 4:00 pm. 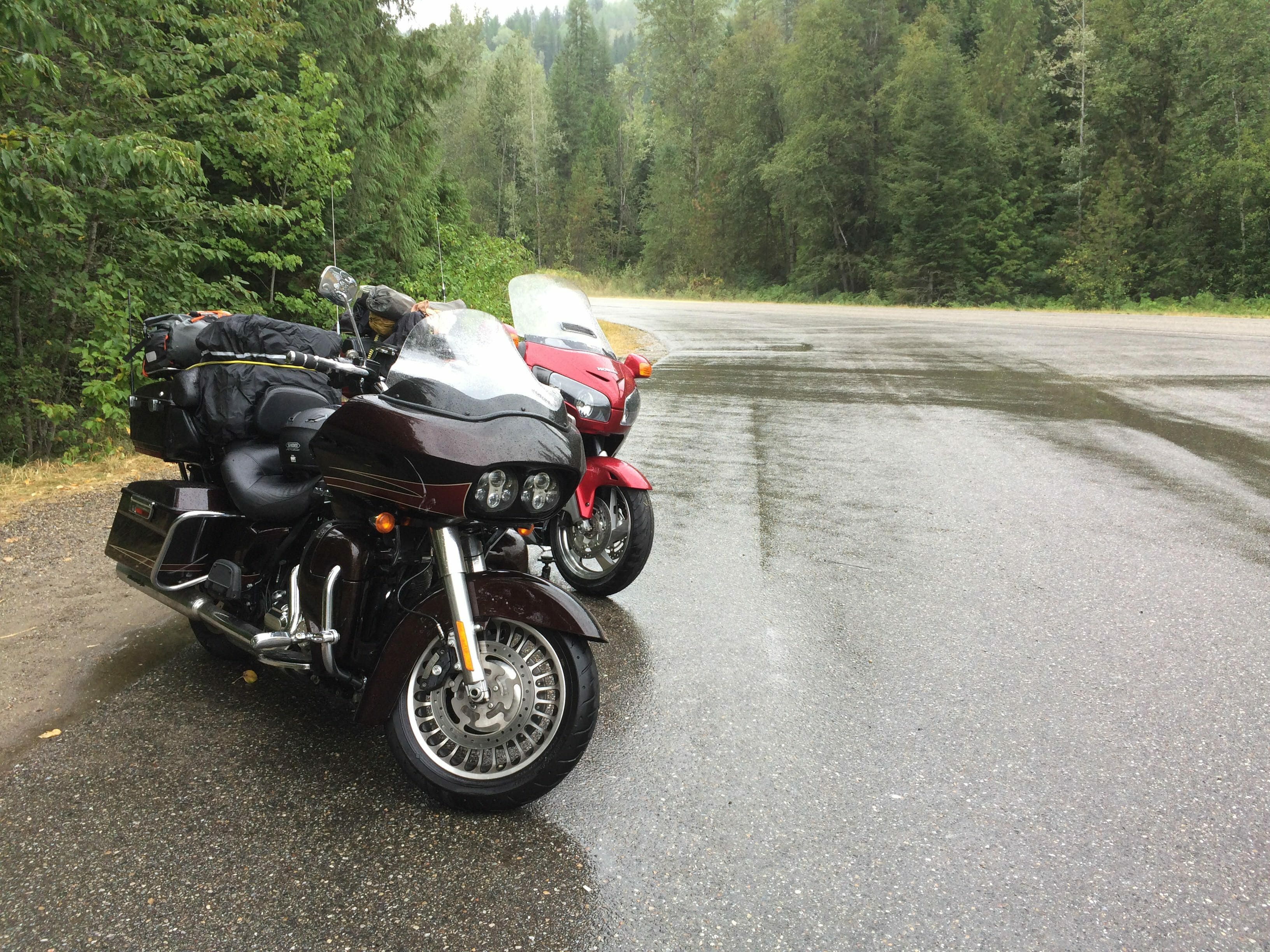 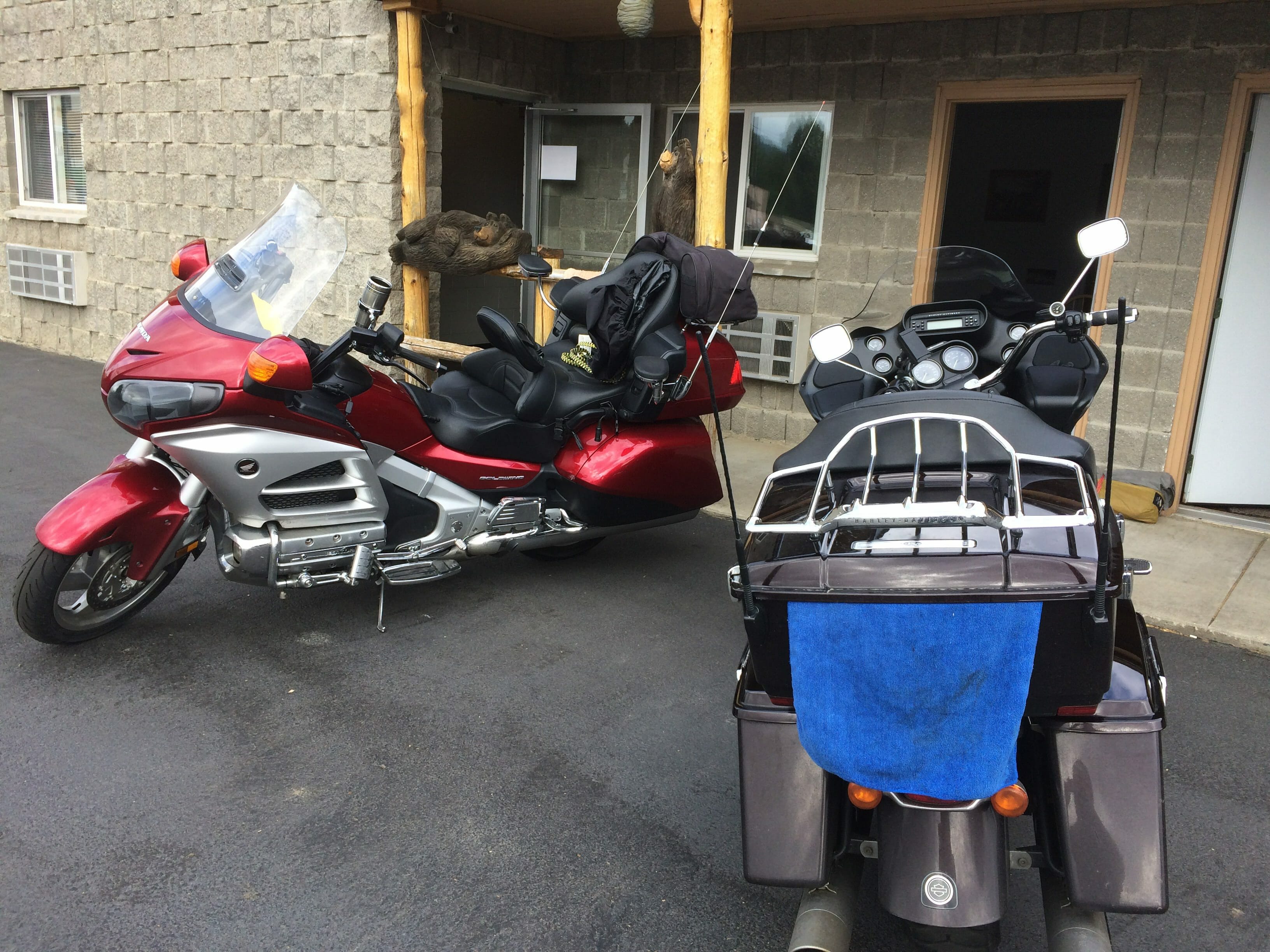 Our second day of riding  the Selkirk loop together had Colin and I travelling through Sandpoint and then onto another of the scenic ‘extensions’ of the loop: the Lake Pend Orielle Kootenai River Super Side Trip.  This introduced us to Clark Fork, Troy, and Moyie Springs on highways 200, 56, and 2.   From there we re-entered Canada at the Porthill/Rykerts crossing, then continued North through Creston and on to Kootenay Bay on the 3A.  We arrived at Ainsworth Hot Springs not long after the Kootenay Bay/Balfour ferry trip, more or less in time for supper.

We had a bit of luck in Ainsworth: Colin had wanted to stay at the Ainsworth Motel, but they were booked up.  The owner ran out just as we were about to leave and told us a cancellation had called in: bingo!  We had a room for the night 🙂  The room was clean and basic, but the owners and the view were fantastic.  They have a lovely grassy area in front of the rooms with chairs to view the lake from: even with the smoke it was outstanding.  Colin and I enjoyed a beer or two there in the evening, and drank our coffee there as well the next morning before we left.

I also got a chance to see the Ainsworth Hotsprings Resort, a fancier facility a couple hundred metres down the road from the motel.  The resort has the hot springs as part of their property- a good option for my wife and I on a subsequent visit! 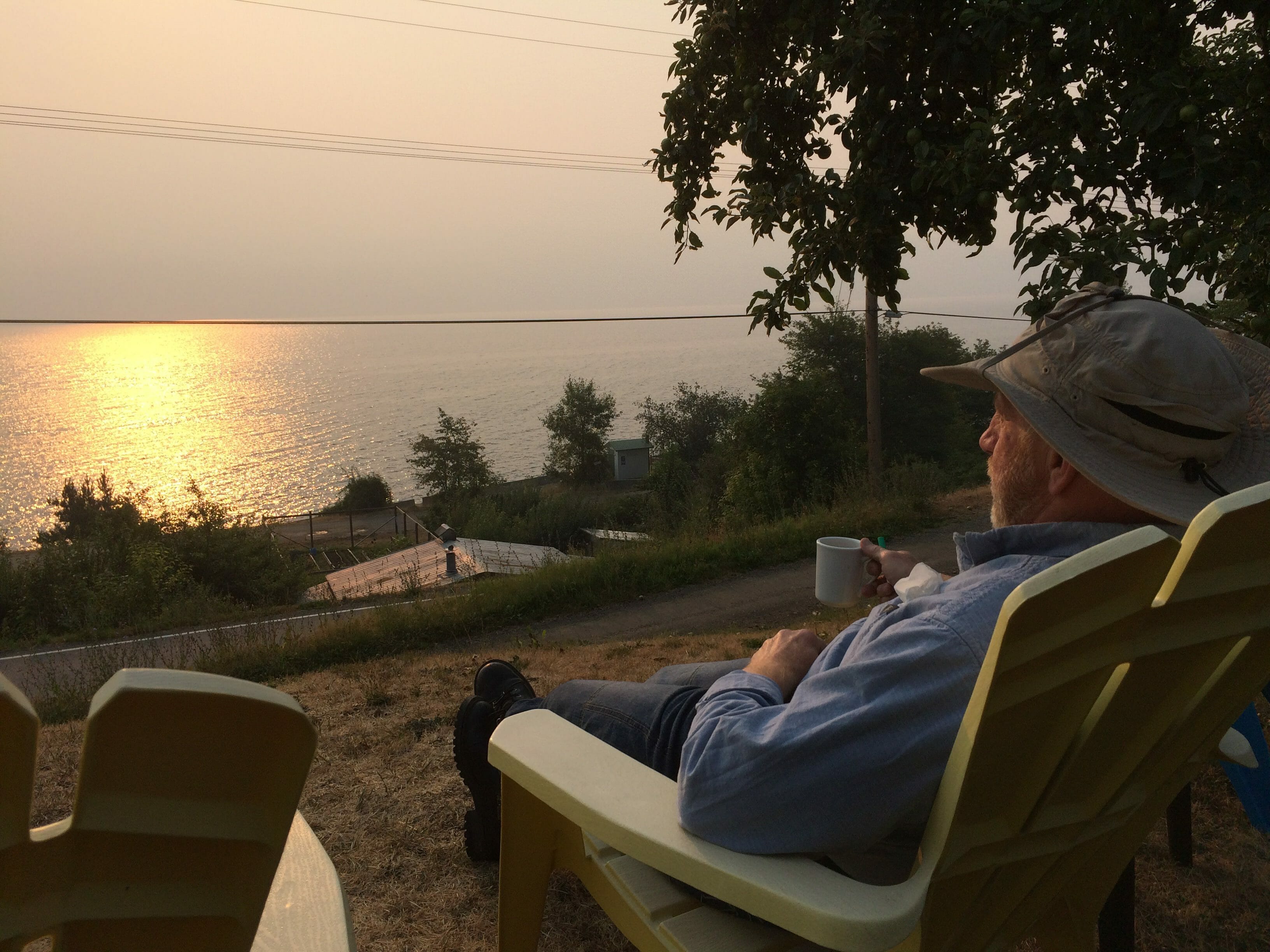 Day four: ‘Just around the next corner…’

Colin wanted to get home in time for his birthday on August 17, so we decided to start back along his route home.  This took us north to Revelstoke, towards a hotel Colin remembered called the Three Valley Gap Chateau.  Per Colin’s recollections, this interesting place was just a short distance east from Revelstoke towards Golden.  It sounded like a good place to have our farewell beers, so when we arrived in Revelstoke I called ahead and booked a room.

Our GPS’ didn’t recognize the address or name of Three Valley Gap, but we both trusted Colin’s memory.  He led the way east from Revelstoke, and soon some small doubts started to arise.  I thought I’d seen somewhere that the Three Valley Gap was about 25 km from Revelstoke, so when that milestone passed without evidence of the hotel, I started asking Colin over our CB radio if he remembered how far it was.  “I’m starting to recognize this”, he said, and “I think its just around the next corner”.  This became our rallying cry: I’d periodically ask if Colin recognized anything, and he’d make some comment that included some variation of “Just around the next corner”.

Nope- it wasn’t just around the next corner 😉  In fact, the Three Valley Gap Chateau is *west* of Revelstoke, away from Golden- exactly the opposite direction from where we turned.  Colin and I laughed and laughed- it was funny as hell, these two guys convincing themselves for over 100 kilometres that their hotel was “just around the next corner”.

Anyway, it all worked out- we got a room at the Travelodge in Golden after some challenges (the first place we stopped, a Best Western, was fully booked), and the folks at Three Valley Gap Chateau kindly refunded our room (although they didn’t have to).  We ordered in pizza and had a good chat, with more than a  few laughs.

The next day we went our separate ways, and I started looking forward to my next road trip with my brother. 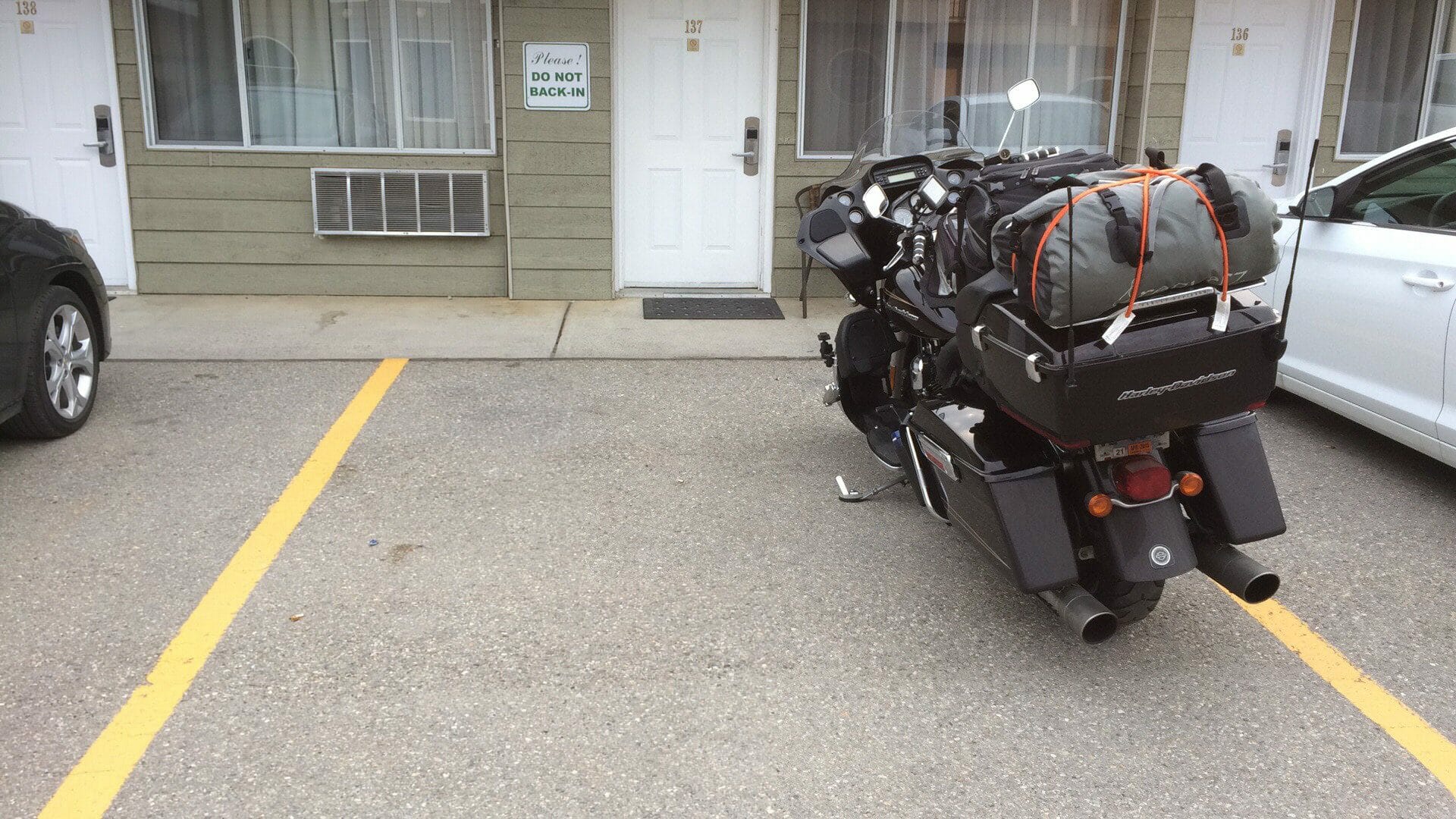