It all started in August of 2014.  Irene thought her Mother really wanted a companion cat, and so she went out and found what she thought to be exactly the kitten her mother desired:  a Siamese – Balinese cross kitten, to be exact.  The kitten was to spend a day or two in isolation at our house before making the trip over to the island to live.

It didn’t work out that way… 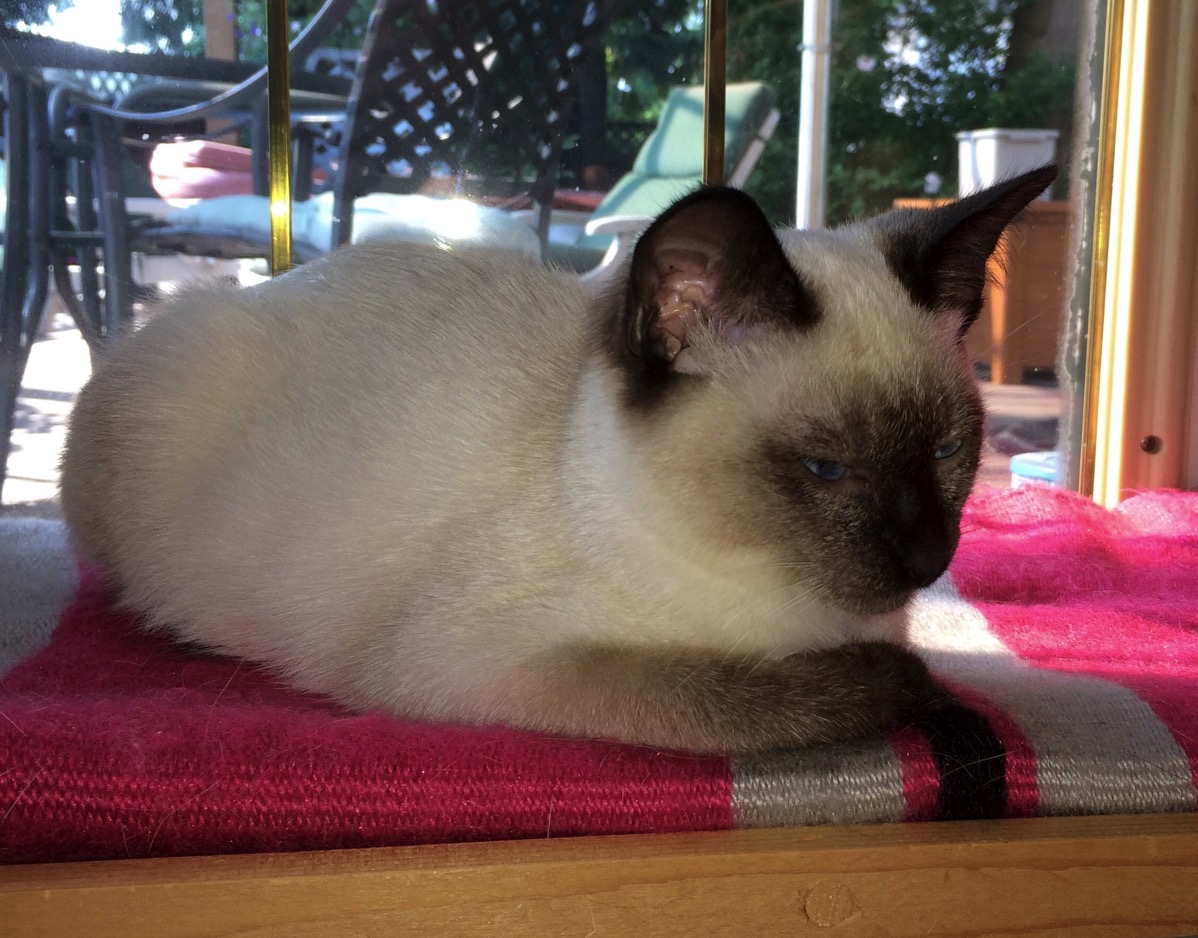 How she became ours

Irene’s Mother changed her mind about having a kitten the day after Irene brought the kitten home.  She might want the kitten “one day”.   We had no real wish for another cat in our home (we had seven already!) but I made one thing clear: if Irene’s Mom didn’t want the kitten, it was ours.  We aren’t a halfway house: I get emotionally attached, and if a cat stays in our house and I interact with it much at all, it becomes ‘our’ cat.  So, Pippin (as we named her) became our cat.

After all, if you have seven cats, how much trouble is it to have eight?  Sigh…

Nope, not a Siamese

Pippin is an odd little thing.  She kind of looks like a Siamese cat: her blue eyes, and dark brown (seal) coloured points certainly fit the expectations.  But she is pretty much nothing like the Siamese I’ve known, specifically Bilbo and Susu who shared our life with us for nearly two decades.  For starters, she doesn’t meow.

Siamese talk,  Some people would say they talk too much, but personally I find the Siamese tendency to hold conversations part of their charm.  Pippin, though, is basically completely silent.   Other than the occasional grumble, I think I’ve only heard her meow a handful of times.  So, strike one for Pippin’s Siameseness.

Pippin is also largely graceless.  Bilbo and Susu strutted around like royalty: they looked down on everyone, moved gracefully from place to place, jumped precisely and accurately, and largely ignored anything that looked like a ‘toy’.  Pippin, on the other hand, can’t jump: even Iris, our obese tabby, jumps from counter to counter, but not little Pippin.  She plays with everything and anything, making toys out of whatever catches her eye.  This includes chasing (and being chased) by the other cats in our household- especially Samira.  And when she plays, she plays like an alcoholic dock worker: thumping into things, knocking stuff over, and when she gets really into the game, grumbling and growling in a weird way that sounds a bit like cursing. 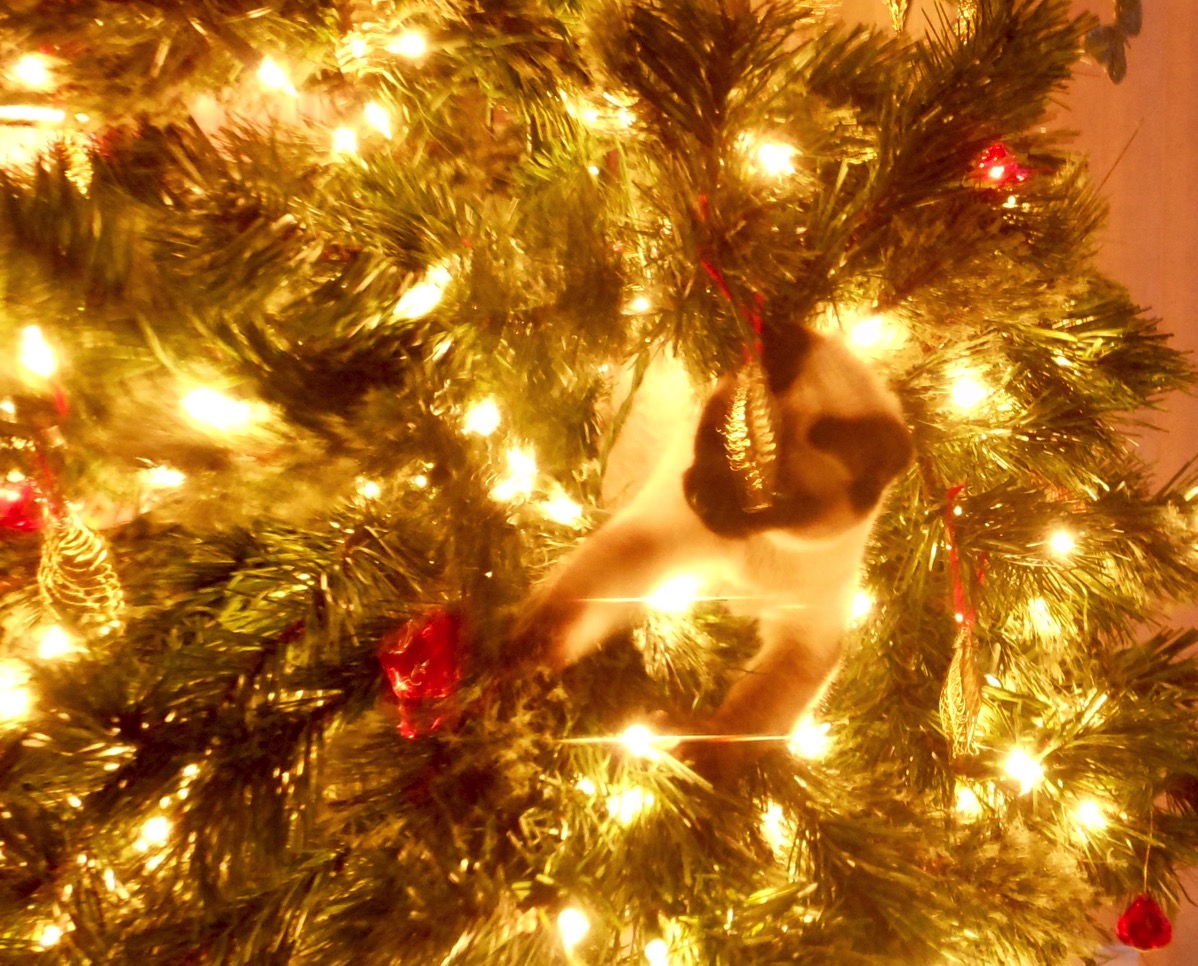 Pippin is a bit… odd

In addition to not being a ‘real’ Siamese, I sometimes have doubts about whether Pippin is entirely sane.  She’s a very sweet little kitten, and I must say that she has the softest fur I’ve ever felt on a short-haired cat, but her behaviour is a bit off.  She seems to have several strange and unexplainable fetishes or rituals that I’ve never observed in another cat.  The most obvious: her “good night” ritual.

Pippin seems to think it is critically important that she supervise me going to sleep.  She has learned my night-time patterns: things like turning off the TV and the lights, and activating the alarm.  When she observes me starting those behaviours, she comes running and becomes intensely underfoot.  She bumps against my legs and feet, throws herself down immediately in front of my steps as I try to go upstairs, and pushes her way into the bathroom as I change into my pyjamas.  As you might imagine, this makes going to sleep a bit of a challenge as I try to avoid either stepping on Pippin, or punting her across the room accidentally.

But her strangest behaviour of all is her foot fetish.  As soon as I take my socks off, she starts trying to lick my foot, sometimes nibbling on it.  She follows my feet with extreme attention until I get into bed, purring and licking along the way.  And once I’m in bed, she does a tour of myself and Irene to make sure we are properly tucked in.  She then leaves for the night (although she occasionally sneaks back later and goes under the covers), apparently satisfied that we have settled in correctly.

I have no idea what is going through Pippin’s mind during these rituals, but it seems important to her.  And she is definitely a part of my life and our household now… unintended or not.