My second big motorcycle trip of the year took me down the Coastal Highway (Highway 101).   Road trip #1 had already established that I enjoyed motorcycle touring, so now it was about seeing where that enjoyment would take me.  I still had questions I wanted to ask myself during the ride: how far in a day is too far, are scenic roads just a little more enjoyable than “main” highways, or a lot, and is driving through unfamiliar cities on a motorbike ‘way more scary than in a car?  I packed up my bike and set out on August 1 to see what new things I could learn about myself…

I was fortunate to be able to start my second motorcycle adventure joined by my brother Colin.  He travelled with me right from my house, crossing the border with me that early Monday morning.  It was great to have his company, and he got me off to a fantastic start. 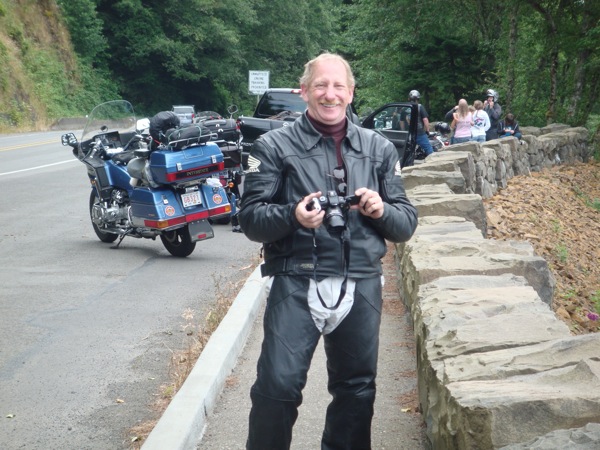 Astoundingly, I was untouched by weather once again: no serious rain, no storms, just perfect riding weather.   On the return trip I essentially came straight home on the I 5, and I won’t say much about that part of the trip.  Interstate travel, at least based on my I 5 experience, is not a chore at all- it is just very bland.  I much prefer the smaller roads, although admittedly the main highways like the Interstates are great when you just want to cover miles quickly.

Colin was with me for the first two days of the trip, and I really enjoyed our ride together.  I liked having the chance to visit with my brother under these circumstances: sharing something we both enjoy, seeing beautiful scenery, and experiencing an adventure together.  I did make one error with the route during those first couple of days, and that was underestimating just how tiring including the Olympic Peninsula would make day number one.  I knew that would add 400 km or so to that day’s ride, but on paper it didn’t look that bad.  If I were to do it again, I would have added an over-night to that part of the trip, stopping somewhere around Port Angeles.  The Olympic Peninsula is beautiful, but travelling through that scenery on a day with over 900 km of fairly technical (for me) riding is just a bit much.  By the time we got to Seaside, I was too tired to care about the hotel or the ocean view.  All I wanted was food and a place to lie flat for a while.

Day #2 of the trip was probably my favourite day of the ride.  We had fewer kilometres to cover, there was a bit less traffic (although traffic on the 101 was pretty light throughout), and it was just generally a more relaxed and enjoyable day.  The second day also brought back to me all my memories of previous trips down this highway.  The coastal views south of Seaside, Oregon are stunning. 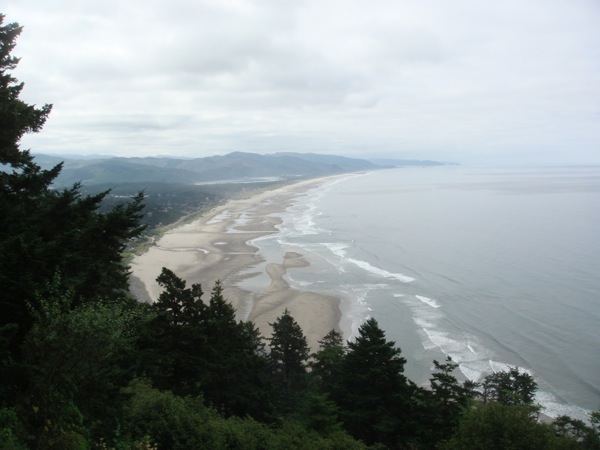 Colin and I parted ways on the third day shortly after we checked out of our Brookings hotel.  He turned North, back to meet his wife Betty in Abbotsford, while I continued on to San Francisco and then Mountain View.   I had consulted with friends who told me that the 101 turned inland away from the coast as it approached San Francisco, something I barely remembered from my trips via this route decades ago.  So I had planned a break off from the 101, onto the Highway 1, intending to stay right on the coast and rejoin the 101 after I’d had my fill of that route.

My choice was a good one, although I made one mistake.  I completely missed the Avenue of Giants, where tourists like myself can split off onto the “old” 101 and see the ancient redwoods.  I really wanted to see this, but had forgotten that it was a separate highway and missed my opportunity.  Regardless, I can definitely recommend taking Highway 1 off of the 101 for anyone who wants to experience extreme twists and turns while hanging their toes over the edge of cliffs falling directly into the ocean.  In other words, it was great, and traffic was fairly light.  My path back to the 101 was via Highway 128, which cuts inland through heavy forest and is also a very twisty secondary road.  Unfortunately, the road surface on the 128 was in pretty bad shape: lots of holes and back breaking bumps, including some really nasty ones on sharp corners.  If you take this route, do *not* plan on going fast: you will definitely regret it if you do, and might suffer more than some rough riding.

I arrived in San Francisco via the 101, which crosses the Golden Gate bridge.  Traffic was heavy as I approached the bridge but, thanks once again to advice from my friends, I pulled into a viewpoint park (Battery Spencer) immediately on the north side of the bridge and relaxed for 30 minutes or so before continuing on.  That brief stop relaxed me, took the stress off, and amazingly allowed the heavy traffic to mostly clear out of the way. 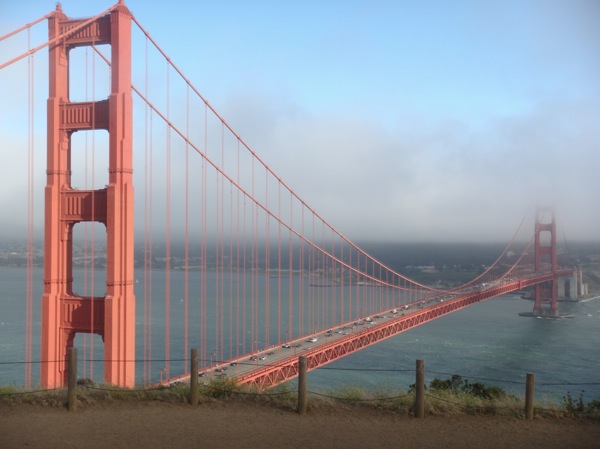 I had to pay the toll crossing the bridge, which at $6 is pretty steep for a motorcycle.  Again, I had advice from friends and had the money at the ready so I didn’t hold up traffic at all.  I was able to shut off the engine on my bike, hand over the money, and restart without causing anyone to honk or road rage on me.  Shortly thereafter I was at my hotel in Mountain View, planning out my next day at the Computer History Museum.

The Best Western Plus Mountain View is, as it turned out, pretty much perfectly situated for the geek wanting to visit the Museum.  It is barely five minutes away, an easy drive down some low-traffic roads.  Once there, the Computer History Museum itself is computer geek nirvana. 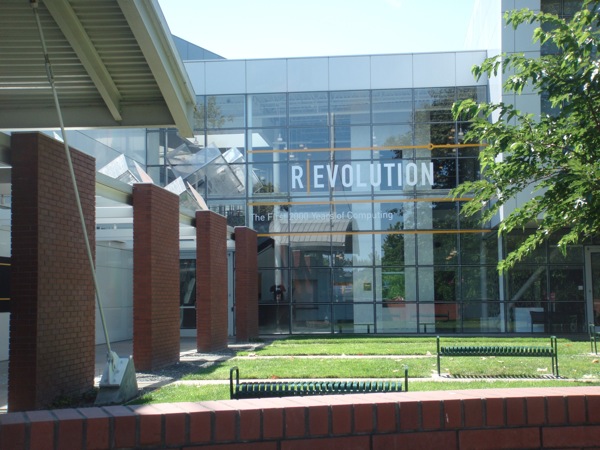 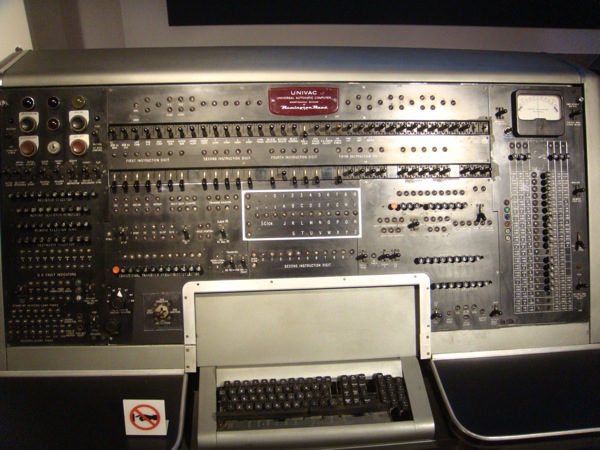 I ended up spending two full six-plus hour days at the Museum, totally indulging my desire to experience the history and amazing challenges computer pioneers faced.  I would imagine that an average computer buff would have their fill of the exhibits in four hours or so, but there are so many evocative artifacts to see, and the complex thoughts and emotions they brought up made me lose track of time.  A big chunk of CHM isn’t just history, it is *my* history: I could remember flicking the switches on an IMSAI 8008 when it was a miraculous piece of the future, the rattle and clunk of my Apple II+’s floppy disk drive loading another surprise, the squeals and chirps of my first 300 baud modem connecting me to an unexplored world.  I could have spent time visiting other shrines to computing like the Apple or Google campuses, and one day I will, but this museum hooked me.

As I was leaving on the second day, one of the grey-haired Museum docents leaving for the day recognized me from inside.  He stopped by to chat about my motorbike and where I was from.  When I said British Columbia, Canada, he said “Oh, that’s too bad: if you were local, I would have encouraged you to join the docent program.  You seem to know your history…”  I felt  a slightly curious feeling of belonging, for a moment, to a rather unique era.  I was there when… and I programmed that… not the beginning, not with founders like Turing or Hopper, but nonetheless a true participant in the generation of people who grew up on the cusp of the computing revolution.  I’m glad I spent the extra time there, and am confident I’ll be back to the area to see the things I missed on this trip as a result of my deep dive into the Museum.

The Oregon Coast highway was as fantastic as I remember it.  Once again I lucked out in the weather department, and experienced a nearly perfect ride as a result.  I cemented my perception of touring being the kind of riding for me.  I experienced a completely enjoyable time together with my brother, Colin.  And I allowed myself the luxury of staring deep into the technology and history of the computing world I love.  I am already giving thought to long motorcycle trips for 2012, and I’m expecting to experience lots of new things, both good and bad, in the process. 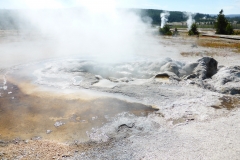