I’ve been really enjoying my motorcycle riding this year.  So much so that I started planning for my “ultimate” touring motorcycle.  I was weighing different features, reading dozens of forums and reviews, and lamenting the several years which I’d likely have to wait in order to save up the cash.  As you might imagine, this non-stop motorcycle this, Harley that, whining and complaining started to get on the nerves of my lovely wife Irene.  Finally, after hearing one too many “<sigh>I wish I didn’t have to wait another two years” noises from me, she snapped:

“Kelly, if I can have two kittens, you can go buy your Harley on terms”

Obviously, my lovely wife doesn’t snap in a mean way.  And that’s how we ended up adding two more kittens to our already cat-crowded home… and it marks the beginning of a stressful period of uncertainty that is still not over.

You see, Irene has been volunteering at a no-kill cat shelter for several years.  The place is badly underfunded, and would take hundreds of thousands if not millions of dollars to get on the right track.  She has been going there weekly, seeing the two hundred plus cats in crowded conditions, and falling in love with various waifs for years now.  Three of our existing feline family came from there, and all of them had their problems.  I’ve been highly resistant to adopting more cats from this shelter: I’ve said several times that we’d be better off donating money to them rather than trying to deal with the mental and physical health problems their cats come with.  Each time it puts the rest of our cat family at risk.

But Irene’s “let me adopt two kittens and you can have a Harley” offer had become an agreement, and now she dropped the bomb: the two kittens were coming from the shelter.  One she had already picked out.  So, despite my misgivings, off we went to the shelter.  When we arrived we discovered the kitten she wanted was already adopted out, but that didn’t dissuade Irene- there were dozens of cats looking for homes.  One little black kitten started following me around, and I picked him up: he immediately started purring loudly and settled in my arms: after a few minutes Irene said “that’s one…” and Harley was adopted.  A little while later I pointed out a dilute calico, whom Irene said was a newcomer and wasn’t approachable.  I walked up to her, picked her up, and she started to purr next to Harley.  A minute or so later it was settled: we had our two kittens- Harley and Jasmine. 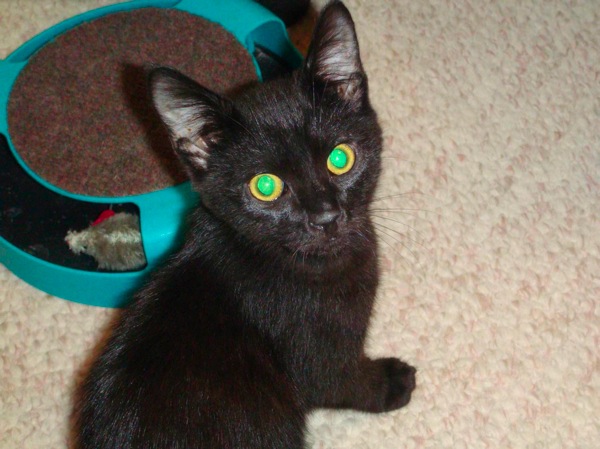 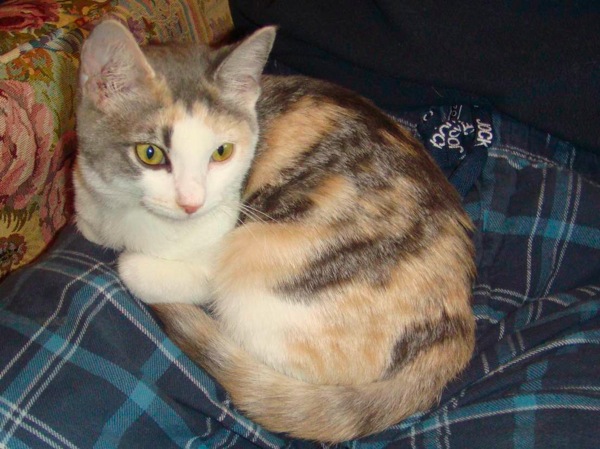 We took both kittens to a vet that someone at the shelter recommended- not our usual vet, and therefore I was a bit doubtful from the start.  He performed a basic health check and found all the expected shelter problems: fleas, intestinal worms, and ringworm; all of which reinforced the importance of our normal isolation procedures.  But we also had him perform an in-office Feline leukemia test, and this is where everything fell apart.  Both kittens tested positive for FeLV, and I was devastated: from what I knew at the time, feline leukemia was a death sentence, and the vet confirmed this by suggesting we have the kittens immediately euthanized.

I knew enough about FeLV to know that it doesn’t transmit readily (i.e.: requires bodily fluid, dies within a couple of hours, etc), and so we ignored the vet’s advice, took the kittens home, and kept them in isolation.  Feeding and handling became a bit of a production, with multiple handwashings between each activity.  I spent several hours that night on-line reading everything I could find about the prognosis for feline leukemia, and started to think that the vet we had taken Harley and Jasmine to wasn’t someone I wanted to trust.

Feline leukemia is a retro-virus that damages the cats immune system, causes a cancer of the cat’s blood cells and definitely can be fatal… but often isn’t.  Apparently, about 40% of cats that are exposed to FeLV develop resistance, destroy the virus, and never become symptomatic.  Another big chunk drive the virus into hiding (i.e.: no symptoms), but become lifelong carriers in whom the virus can “flare up” at any time: apparently, these cats will test negative.  Of those that develop symptoms, many live reasonable lifespans with reduced immunity, eventually succumbing to some sort of secondary infection.  Add to all of this the fact that in-office “snap” tests are considered unreliable for final diagnosis, and I really started to think we needed second and third opinions.

The first step was to get all of our existing cats tested: obviously, if we already have a FeLV carrier in the house from our previous adoptions, the damage is already done.  Five cats and $800 later, we now know that our existing family members are “clean”: no evidence of feline leukemia.  So step number two began: getting everyone’s FeLV inoculations up to date.  That’s underway now, with boosters scheduled for a month from now.  “Full” protection (about as good as birth control) begins two weeks after that.  So the kittens must stay in isolation for at least six weeks.

In between this, Harley and Jasmine were playing and running around and eating just like you’d expect kittens to.  They started to develop upper respiratory symptoms after the first week and, although this is pretty standard for shelter kittens, the runny eyes and sneezing was freighted with deeper meaning due to the looming spectre of the retrovirus.  When they started sneezing up blood, we immediately raced to step number three.

Step number three was getting those second and third opinions taken care of.  This time we went to a vet we trust, who has a FeLV positive cat of her own.  The first thing Dr. Michelle did was re-assure us that this could work out, that fully vaccinated our current cat family would be reasonably well protected, and that at a minimum we could give the kittens a decent albeit short life.  The kittens upper respiratory problems were basically normal although somewhat severe, and could be treated with antibiotics to reduce the bacterial load.  New FeLV tests, this time performed at a lab, were ordered.  All other health indicators in the kittens were perfectly normal.

And here we are, three days after the antibiotics started.  Harley responded in less than six hours, his conjunctivitis, runny eyes and nose, and bloody sneezing was gone that fast.  Jasmine’s sneezing was vastly reduced in the same time frame and, although she’s still sneezing a bit, it is clear fluid and no blood.  They are both eating huge amounts of food (they never stopped even when sick, although they did slow down a bit), drinking lots, playing like crazy, and cuddling whenever we come into their “isolation ward”.  The second test results just came back yesterday.  Harley is now FeLV negative, Jasmine is still positive.  Basically, Harley (at least) appears to have beaten the virus- he’s probably still a carrier, though.

What does the future hold for Harley and Jasmine?  Well, more tests, no doubt.  And six weeks of isolation.  Problems and expense to be sure.  But when we adopt a cat, we are taking responsibility for a life.  Not an appliance that you return if defective or if you suffer from buyer’s remorse.  There is no way on earth that I want to send Jasmine and Harley back to the environment they came from: if my earliest worse fears had been true, we would have found a FeLV positive home for them, or a quiet shelter with an isolation ward for feline leukemia patients.  But with what I know now, I think we can manage the risks to our other furry family members, and give Jasmine and Harley the best life we can arrange.

2 thoughts on “A Tale of Two Kitties: Harley and Jasmine”