Years ago, shortly before the turn of the century, I had a pretty good backup solution. I had a 20 Gigabyte tape drive that I used to back up all of my storage.

That was a decade ago. Somewhere along the line, the combined increases in total storage I had to back up plus the slowness/cost/general hassle of maintaining tapes mean that my backup strategy broke down. I tried various things in the interim, including network attached storage in 2006, and the Time Capsule for backing up my Macintoshes. The Time Capsule works great, but even with a terabyte of disk storage I am rapidly running out of room- and it does nothing to back up my Windows or Linux machines.

I needed something expandable, multi-platform, fast, and inexpensive. Well, three out of four isn’t bad, I guess…

What I’ve ended up with is a pair of NetGear ReadyNAS devices: a ReadyNAS NVX, and a ReadyNAS NV+. Between them, they currently provide six terabytes of RAID storage (eight terabytes of physical disk). I have configured the NVX as the destination for my computer backups: currently three Windows systems, one Linux machine, and one Macintosh. The NV+ backs up the NVX: once every 24 hours it duplicates any content changes on that device. I will eventually be moving the NV+ to a different room on a separate floor in the house: not exactly “off site backup”, but it will reduce the likelihood of both devices suffering in the event of a catastrophe.

This configuration is actually a lot more “sophisticated” than I originally planned. I bought the ReadyNAS NV+ with three drives initially, and had it all up and working for a week or so. The NV+ performs reasonably well, but it isn’t exactly a speed demon: on a gigabit ethernet wired network, I was observing experiencing data transfer rates to the NV+ on the order of 10 megabytes per second. I did more research, and found that the NVX is the “next generation” of ReadyNAS, using a higher performance processor to achieve transfer speeds of four to ten times as fast as the NV+.

I experienced buyers remorse, and sticker shock when I looked at how much more expensive the NVX is than the NV+: $1,800 versus $500, more or less. Part of this is the fact that the NVX is not available in a “diskless” version- the $1800 NVX includes a pair of one terabyte drives worth about $100 each, whereas the NV+ is an empty chassis. But then I found an NVX for the low, low price of $1,100. I believe it was a pricing error at my favourite supplier, as they had the exact same model of NVX listed at $1,800 and $1,100 under slightly different names. I jumped on the opportunity- my belief that the $1,100 price was an error was somewhat confirmed by the nearly immediate disappearance of the cheaper listing the day after I ordered it. But NCIX honoured the price, and now I had two ReadyNAS devices.

Of course, I had to buy more drives… and a new network switch that supports 802.3ad/LACP, which is a cool feature the NVX supports to combine two 1 Gbps links into a “virtual” 2 Gbps link. My total bill for assembling all of this is probably over $2,500. I have also spent an inordinate amount of time reformatting / re-initializing RAID arrays, installing/configuring backup software, and testing what I’ve built: probably at least forty hours in total. This is far from “plug and play”, but my home network is arguably quite a bit more complicated than what most people have, and I am far more fussy about how things work

The NVX and NV+ are essentially identical in both appearance and basic function. They consist of a small chassis, much like a small mini-tower PC, with four hot-swappable hard drive bays:

The two ReadyNAS devices side by side 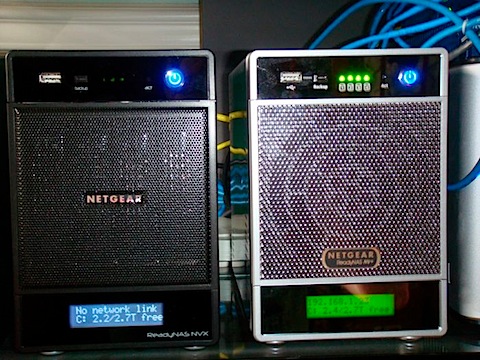 The NV+ with its front open and a drive tray removed (essentially identical to the NVX):

Both devices support Windows (CIFS/SMB), Linux/Unix (NFS), and Macintosh (AFP as well as Time Capsule) file system types, as well as rsync, FTP, and HTTP for accessing the content. Streaming via iTunes server emulation and ReadyDLNA (Windows/Xbox/etc) support is also included for both ReadyNAS models. They also have almost identical user interfaces for management. Both permit “hot” swapping of physical drives, and various methods to grow the storage capacity without disrupting the active storage.

The differences between the two boil down to two things: processor architecture and network attachment. And these two things combine into one main advantage for the NVX: performance.

The NV+ uses an older (SPARC) processor technology and provides a single Gigabit ethernet network connection. The NVX is based around a multi-core Intel processor and includes two Gigabit ethernet connections which can be configured for redundancy or load balancing/teaming. The NVX also can be configured to provide iSCSI virtual hard drive support, meaning if you have a computer that supports iSCSI you can natively format and boot off of a partition on the ReadyNAS NVX as if it were a physically attached hard drive. But the main thing the NVX provides over the NV+ is performance: in some reviews it is rated as the fastest consumer network attached storage device available, with maximum speeds pushing up close to 100 MBps (i.e.: full Gigabit ethernet speeds).

In my limited and anecdotal testing, I have been able to consistently achieve 40-50 MBps using my ReadyNAS from a Windows 7 computer. This is between four and ten times as fast as the NV+ and compares favourably to the speed of a hard drive physically installed in my computer. Copying a 500 MB file to the ReadyNas NVX takes something like 12 seconds: blindingly fast for a network attached device. All of this extra speed has meant that I don’t hesitate to copy files to the ReadyNAS like I may have in the past. I even migrated my entire iTunes music library, about 800 songs totalling something like seven gigabytes, to it.

Other miscellaneous factors/observations to consider

As a side note: if you format drives in an NV+, they are not transferrable directly to an NVX- you have to reformat/reinitialize them first. I also experienced a problem when I “hot removed” a drive from the NV+ and tried to re-insert it. The NV+ registered it as “dead”, and the only way I was able to get it to work again was to perform a factory reformat of the NV+ (losing all of the data/configuration stored). This is not exactly “normal” behaviour- usually, pulling a drive from the NVX/NV+ while it is running and re-inserting it later will result in that drive automatically being reformatted and resynchronized. It isn’t clear exactly why this didn’t work in my test: you can read my forum posting and consider my experience as a “your mileage may vary” warning.

The NetGear ReadyNAS family is a good choice for a home office or small to medium sized business: more or less any situation where you have several (neither a single computer or hundreds) that you want to provide network available storage for. Although the ReadyNAS is comparatively easy to configure and is well supported both by the company and via their public forums, it is a complex product with a vast array of options and features. I would not suggest it for someone who has a hard time hooking up a network switch or installing a new version of Windows. And I would steer a new purchaser towards the ReadyNAS NVX: it is a more expensive alternative, but the performance difference is, in my opinion, definitely worth it.

One key thing to remember: storing your data on something like the ReadyNAS, despite the data protection inherent in the standard RAID configuration used, isn’t “back up”. An effective back up strategy requires multiple copies, with consideration given to disaster recovery (e.g.: off-site backups).