Apple ended months (for some people years) of speculation today by finally announcing the upcoming release of a tablet computer, the iPad. Like pretty much everything Apple releases, there is an overwhelming amount of hype surrounding the device, and many “true believers” are disappointed by what the device offers.

Even so, I plan on buying one when it becomes available. I thought it would be appropriate to explain my rational on the theory that my friends and family may doubt my sanity more than usual as a result. 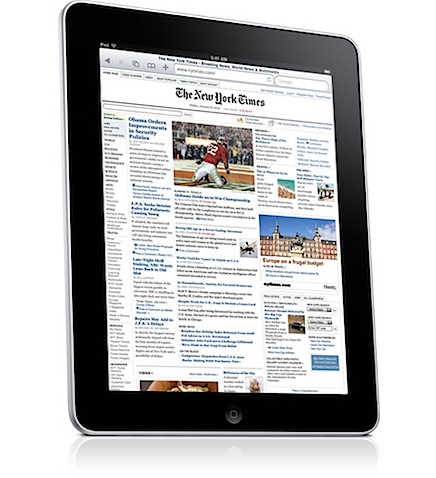 What is the iPad?

The iPad could be described as a really big iPod Touch with optional 3G (mobile internet) connectivity. Unfortunately, that wouldn’t help much if you have no idea what an iPod Touch is. The other description that you will see applied is to call it a “tablet” computer: however, it is quite different from traditional Windows-based tablets, beginning with the fact that it doesn’t run a full desktop OS. Similarly, it is kind of the same size as a netbook, but with a touch sensitive display in place of the keyboard.

None of these things really stack up very well in terms of describing it. So perhaps explaining what it does would help. It can browse the internet with a more or less full size (9.7″ 1024×768) display, built in home wireless (802.11n WiFi) connectivity. You can read and create email messages and, with optional software, work on spreadsheets, documents, or presentations. Photos can be downloaded, viewed, and edited. You can hook a keyboard up to it wirelessly via Bluetooth. It comes with 16, 32, 04 64 GB of storage. You can watch movies, listen to music, read books, and subscribe to various magazines and other periodicals. It has a full colour display and ten hours of battery life, meaning you can use it to watch movies on reasonably lengthy flights.

The iPad is “fully” compatible with the 100,000 + applications available for the iPhone and iPod Touch- it runs a special version of the same operating system, so this makes sense. It doesn’t currently multi-task like Windows does but, if you are familiar with the iPhone / iPad Touch, that often doesn’t matter much as many things can still happen “at the same time” (kinda multi-tasking, but not quite). The price will range between $500 and $1000 depending on the storage and options you select.

Why would I want one?

The obvious answer is because I love gadgets, and am a geek. For years I have chased the “ultimate” personal portable device. I own an original Apple Newton, a couple of Palm devices, an iPaq (Windows CE) device, an Irex Iliad, a Sony eBook reader, and a BlackBerry. I also own two laptop computers. Each of these devices has taught me something, and some have become treasured parts of my day to day life. Yet still they aren’t quite “right”, and so I continue seeking: purchasing the iPad is an obvious extension of this lengthy quest.

I can imagine a number of ways I would use it. There are a lot of times when the BlackBerry isn’t adequate for what I want to do on the web, but the MacBook is overkill. When I’m wanting to check something on the web quickly while watching TV, or need to reference photos I took of a clock mechanism while I’m working on it later, when I’m on vacation, or read my Internet feeds while on the… chair: all of these are circumstances would be a good fit for the iPad.

Before the announcement, I set out several features I wanted to see before I would buy. First, I wanted a price not much more than $1000. Secondly, I wanted the ability to use a wireless keyboard. Thirdly, it needed more than four hours of battery life. Finally, I wanted it to be high enough resolution with a large enough display that I could comfortably read web pages. The iPad hit all of these requirements and surprised me in the price arena: it only costs $1,000 in a fully maxed out configuration. If I don’t need so much storage and forgo 3G networking, I can get a decent configuration for a couple hundred less than that: by Apple standards, that’s downright cheap. And the ten hours of battery life is a very positive feature.

Things that bug me

The foremost flaw with the iPad for my purposes is the way they have packaged the 3G wireless Internet option. You can’t buy an iPad and add 3G later: you have to buy the feature from the start. This has two impacts: first, I have to decide to buy a feature I may not use, but might want at a later date. Second, because of how international licensing and approvals work, even if I decide I want to commit the extra money I won’t be able to buy the 3G version in Canada until likely six or more months from now. If they made 3G available as a plug-in feature, both of these problems would be eliminated.

The other issue with the iPad is the same one I have with pretty much all Apple portable products: the lack of a user-replaceable battery. I really wish someone could convince Steve Jobs that lacking this feature isn’t a “plus”, and in fact constrains the utility of every portable device they sell. Not having a replaceable battery means that you can’t ‘refresh’ the device with a new battery when the battery life expires: at least not without either sending it away for several weeks for “factory replacement”, or risking opening the device and doing it yourself. It also means that you can’t carry a couple of spare charged batteries in your bag for “on the fly” replacement. The lack of a replaceable battery isn’t a show stopper, but it surely is irritating.

Neither of these irritants will stop me from buying an iPad, but they will reduce my satisfaction in the process. And both irritants have no practical reason for existing other than a slavish adherence to certain design rules that fail to impress me after several years of observation.

The iPad isn’t earth changing, revolutionary, or astounding. Like most of the things Apple has produced, on the surface and in view of “bullet point” features, it has been done before. There have been tablets, e-readers, netbooks, and personal media devices of various sizes for years now. But what Apple has proven is that they have a gift for packaging functionality and wrapping it in a user interface that goes far beyond the feature list. From what I’ve seen, the iPad continues this history, and it appeals to me on several levels.

If you are curious what I mean by Apple being able to go far beyond mere bullet points via their user interface skills, check this quick video demoing the multi-touch UI and its responsiveness

3 thoughts on “I will be buying an iPad… but why?”