I’ve moved my Twitter feed from the right side to the left side navigation area on this page. The “balance” was starting to bug me (i.e.: too much vertical “stuff” on the right versus the left), and for some reason it just seems to make more sense under “recent comments” then above my photo gallery block.

I have not yet really slowed down my rate of “tweeting” yet: by the way, I prefer calling individual Twitter posts “twits”, but apparently that is bad form- sorry. I started on May 14th, and I’m posting somewhere around six to eight updates per day. if you look at my follow cost I seem to have stabilized at just below 400 milliscobles. I’m not feeling any compulsion to tweet: I just do so when something catches my eye and I think other folks might want to hear about it. Probably my main “vanity” when tweeting is that I respond to a few people like badastronomer (Phil Plait) and wilh (Wil Wheaton) on occasion. In part I do this because I’m hoping they might say something back- but generally I actually *do* have a question, I just probably would never have the courage to ask them to their face.

I think that is the most intriguing thing for me about Twitter: the fact that you can have a sort of disjointed, quasi-real time conversation with someone whom you would normally never interact. I don’t necessarily mean someone “famous”, but that has its appeal. Twitter has a bit more immediacy than, say, a forum (bulletin board), and there is much more of a “conversation” going on than with a blog. I have only received a couple of responses to my queries to other Twitter users, but those were sufficient to feed my interest. In that way, I’d say it is somewhat like the thrill some people get from playing slot machines: the reward in this case is becoming part of a conversation, and what you are gambling is the exposure you risk by making some of your more immediate (and less well considered) thoughts public.

And it is okay that the conversation is often very one-sided. I’ll use the example of Wil Wheaton for illustration purposes. I learned long ago from Wil Wheaton’s website that he is a much more “real” person than I thought he might be based on his Wesley Crusher character from Star Trek TNG. But via his Tweets I’ve discovered that he plays D&D, enjoys an occasional beer, and roots for his favorite hockey team. These aren’t canned, crafted, by the script messages (although you find some of that on Twitter), and the spontaneity is sometimes quite… refreshing. The conversation feels more like what you might hear in a brief chat at a bar or party if you ran into these people. And I suppose that is the point: the enforced brevity of the message strips away the formality of the longer forms.

I guess what I’m saying is that I’m starting to “get” Twitter. I can certainly understand not wanting anything to do with it, or simply not seeing the point. But like a lot of things, now that I’ve tried it I find the reality is more intriguing than my speculation and critical analysis previously led me to conclude.

4 thoughts on “Shifting my Twits around” 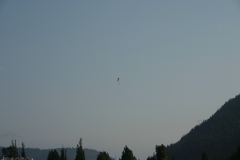