My new coffee machine has arrived: 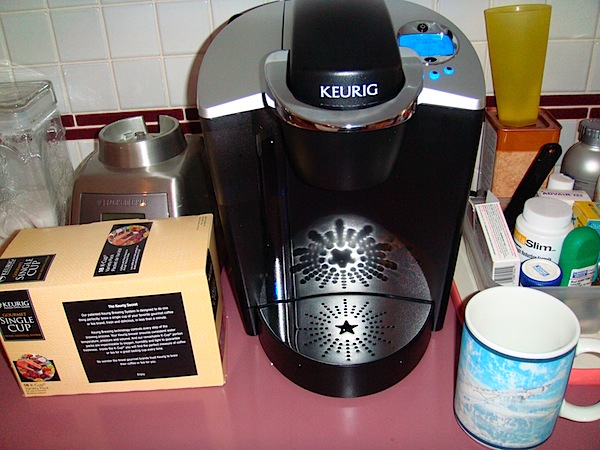 What I got was a Keurig model B60 “Special Edition”– I’m not sure what’s special about it, although it does have pretty blue LEDs that light up illuminating the display and the water reservoir. This is important for keeping Irene happy- she likes blue LEDs. I was pleasantly surprised to discover that they included sampler package of coffee, so I was able to try out the K-Cup right away. After priming the unit (a one time thing), it made its first cup of actual coffee: Tully’s coffee Kona blend.

Some descriptive words regarding the machine: solid; quiet; fast; easy; attractive. One of the downsides is that the “default” K-Cups are really sized for a medium size (7.25 ounce) cup, and I drink something closer to 10 or 12 ounces in my travel mug. You can set the Keurig to brew a 9.25 ounce cup using the default K-Cup and that works reasonably well in my travel mug, but it also makes a slightly weaker cup of coffee. And the Kona blend itself is mild, so my first cup was a bit on the “watery” side of things. That said, the coffee brewed was at a nice temperature, tasted good without any bitterness, and was produced quite rapidly: definitely less than sixty seconds. I’m pretty confident I can get exactly the cup of coffee I want by selecting a “bold” or stronger roast- I’ll have to see how this holds up in practice. 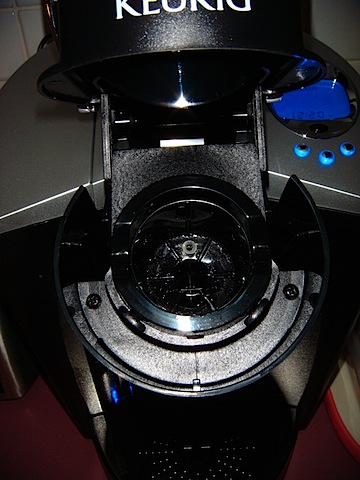 The maw of the beast: this is where the K-Cups go 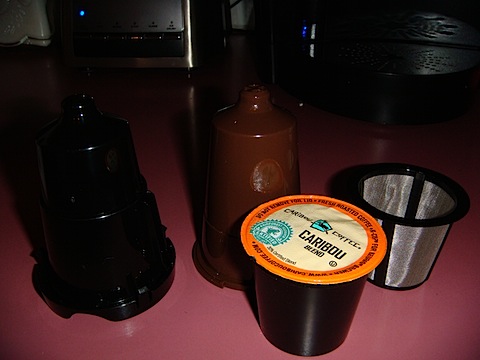 What the beast eats:
K-Cup in front (black thing to the left is the “holder” removed from the Maw above)
My K-Cup with its filter removed in behind

Thanks to comments in my previous post from my friend Chris, I’m not feeling too terribly bad about splurging on this single cup technology… but it doesn’t hurt to work out the numbers. Price on the Keurig B60 at London Drugs was $159.99. The “My K-Cup” gadget (for using your own coffee instead of the pre-packaged K-Cups) cost $14.99. K-Cups cost about $15 for 24 or about 60 cents a cup: call it 70 cents with shipping. I expect to drink one or two cups of coffee each morning as I get ready for work, so that’s about $1.40 a day for supplies. Assuming the machine lasts two years, that adds another 20 cents a day for the equipment- my coffee habit will be satisfied for under $2 a day, allowing a bit for milk and sugar. I guess that isn’t too horrible 🙂

11 thoughts on “Keurig in da house”