Nearly 20 years ago, some scientists observed something that looked like room temperature fusion, or “cold fusion”. If such a thing actually worked, and generated net positive energy flow (I.E.: you get more energy out than you put in to start and maintain the fusion), the world could be changed in amazing ways. Unfortunately, no one, including the original scientists, has been able to reproduce the observations in the two decades since the original incident.

Until a few days ago, that is. Scientists at Osaka University in Japan have publicly demonstrated what appears to be a working cold fusion design. Better yet, it seems to produce positive energy flow. There is tremendous doubt and disbelief in the scientific community because the previous incident gave the whole concept of cold fusion a bad name. And I personally am doubtful: if cold fusion really works and uses materials that can be produced rather than some arbitrarily limited/rare resource, and if it produces positive energy flow, and if that positive energy is significant… once again, the world could change in amazing ways.

Cold fusion could, if it really works well, mean the elimination of petrochemicals for the generation of electricity. That by itself would, in any reasonable world, fuel a massive shift to electricity for powering our vehicles. And if cold fusion generators can be made small, safe, and simple enough to fit in a home, we could see a truly distributed energy grid. If they can be made even smaller, perhaps we could have a fusion power plant generating electricity in each of our cars. The humourous Mr. Fusion concept in the 80’s movie series, Back to the Future, could become something like reality.

Alternately, this could be another huge mistake, setting back the investigation of the real possibility of cold fusion for several more decades. Or it could actually work, but require such rare or hard to manage materials and produce so little usable energy that the resulting technology is little more than a parlor trick. I fear that one of these possibilities is much more likely than the optimistic alternatives.

5 thoughts on “Another kick at the cold fusion dream…” 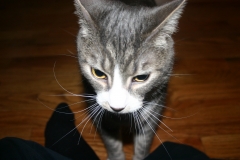