Liars, damned liars, and statistics. Apparently, several of the most “reliable” temperature recording surveys in the world indicate that the Earth’s average temperatures are actually showing a downward trend during the last decade. But the single most quoted source, NASA, says exactly the opposite. From an article on The Register…

How can scientists who report measurements of the earth’s temperature within one one-hundredth of a degree be unable to concur if the temperature is going up or down over a ten year period? Something appears to be inconsistent with the NASA data – but what is it?

One clue we can see is that NASA has been reworking recent temperatures upwards and older temperatures downwards – which creates a greater slope and the appearance of warming.

[From Is the earth getting warmer, or cooler? | The Register]

The report suggests that NASA has been “correcting” historical temperature records using some method known only to them. These corrections don’t agree with anyone else’s historical records, and result in a more convincing upward slope in temperatures over the last century than anyone else’s data. Interestingly, the man in charge of the NASA data is Dr. James Hansen: science advisor to Al Gore, and a luminary in the global warming advocacy movement.

There are a ton of interesting links and data in the article. What is the truth? Well, as I’ve said before, I think humans have had a major negative impact on the world’s environment and climate, and it is critically important to start doing something about it. But I also think we barely understand how the climate actually works, and if we are being fed rejiggered data by various supposedly authoritative bodies then the job of trying to figure out the reality becomes increasingly impossible.

There is a lot of evidence of misdirection and outright lying on both sides of the global warming discussion: enough to make me doubt where the truth actually lies. There are obvious (to me, at least) political agendas here. Unfortunately, scientists are human just like the rest of us: subject to arrogance, hubris, political scheming, power hunger, greed, and all the rest. Usually, scientists are, as a whole, capable of self-regulating- the nature of their work demands that they question the common truth. But when funding, careers, and public opinion can be pulled, terminated, and manipulated, it makes it hard for scientists to remain honest and neutral.

According to Dr Hansen, the climate tipping point will arrive within my own lifetime. By 2016, we will be past the point of no return. Nothing we do after that will save us: if we haven’t already radically reduced our CO2 footprint, it will all be over. I hope Dr. Hansen is wrong, I fear he is right: regardless, we have to make major changes to the way we live, or pay the price. Just how radical do those changes have to be? Are we really the singular cause of the problem, or are there other factors at work? What worries me here is that the facts are being manipulated, possibly by both sides of the debate, and perhaps by people and organizations we should have absolute trust in.

9 thoughts on “Is NASA playing with global temperature statistics?” 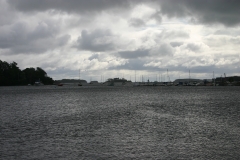