I’ve had my MacBook Pro for a week now, thought it would be a good time to share some pictures.  Here she is:

This picture was taken the very first time I powered the machine on, after it had completed its initial setup.  The machine came pre-installed with OSX 10.4.10: the last version of OSX before Leopard.  I got a "free" upgrade to Leopard (just had to pay shipping and handling), and it arrived here yesterday.  Here’s how the Mac looks now with Leopard installed…

Yeah, I know…unless you know what you are looking for, the main difference between the pre and post Leopard photos is the default desktop image.  But if you saw it in real life you’d probably notice right away that the "dock" at the bottom of the screen is significantly nicer looking.  It has reflectivity and such, which is purely eye candy but is nice none the less.

Other features of Leopard include fan-out "stacks" of application or document icons on the dock, a visual document navigator called "cover flow" that completely changes the way you look through your files and folders, and a cool backup system called Time Machine.  I haven’t set up Time Machine yet, but basically it is like Windows XP/Vista System Restore, but with a tremendously visual interface that makes backup and restoration sort of like a video game.

One other thing I ordered was a wireless keyboard.  To be honest, what I got was a lot different from what I expected:

The picture shows the new wireless keyboard at the front, the laptop’s keyboard behind, and the Leopard packaging at the back.  The keyboard I expected was something more like the wired one on the new Mac desktops.  But if I had actually looked at the Apple website I could have seen what I was getting.

Don’t get me wrong- the wireless keyboard is actually very nice: extremely compact, aluminum, and decent tactile feel.  But…its missing the numeric keypad and such.  I’m guessing it is really more or less intended for multimedia stations (E.G.: hook your Mac up to your TV, sit on the coach), but I’m not sure.  In any case, it wasn’t terribly expensive (about $80), so I’ll see if it grows on me.

One last note…one of the reasons it took me a few days to get these pictures up was because I wanted to upload them with my Mac.  My camera uses SD memory cards, and the MacBook Pro doesn’t have an SD slot.  On a whim, I took a USB multi-media card reader I bought four or five years ago for my Windows PC when my friend Chris was here, plugged it in to my Mac, and discovered it worked just fine.  How often does a piece of hardware, regardless how simple it is, still work five years and three or four completely different computers and OSes later?  Kudos to the folks at Dazzle Multimedia, who seem to have been swallowed up by Pinnacle…but it appears the Dazzle readers survive as a Pexagon product.

5 thoughts on “Pictures of the new Baby…” 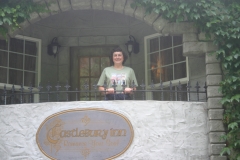