I mentioned in a previous post here that I picked up some additional hard drives.  The 750 GB drive is running happily in an external eSATA-connected enclosure and is providing backup for my machine.  The other two drives are sitting on a shelf, and will remain there indefinitely.  There is a story behind their banishment from my computer.  It isn’t that there is anything particularly wrong with the drives themselves: I’ve finally concluded that my Asus motherboard has crappy RAID/AHCI support.

I have spent the last couple of days repeatedly building and tearing down my machine.  First I built a RAID 1 array.  Bear in mind that the drives I’m using are good quality Seagate 7200.10 drives: they have full SATA2 support, including Native Command Queuing (NCQ).  The drives they displaced were high-end WD Raptor 1500ADFD drives: arguably, the Raptors are better drives, but I had suspicions that WD drives might be behind my problems putting my system into standby mode in Vista.  I was wrong.

After installing the Seagate drives in RAID 1 mode, I restored my system from Windows Backup.  This worked: the system booted and all looked good.  Putting the system into standby…failed by corrupting the drives horribly, just like with the WD drives.  Note that I tried this both with the current official ASUS BIOS (v804) and with the beta BIOS (v906).  I was also using the most recent ATI RAID drivers.  With the same result.

My next theory: something might be wrong with the configuration I backed up.  I performed a fresh Windows Vista X64 install from scratch.  Same result: massive drive corruption when restoring from standby.  I then retried both of the above with the drives configured for 1.5 GBPS SATA instead of 3 GBPS SATA: again, same results.  Bear in mind that each test took a couple of hours.

Next I tried configuring the drive without RAID at all.  Since I had the drives configured for 3 GBPS, I had to go with AHCI: base SATA IDE only supports 1.5 GBPS, at least from what I’ve read.  This time, I didn’t even get as far as being able to try standby: the system blue-screened during boot.  It failed during a Safe boot as well.  I tried several iterations of this test, with fresh OS installs, using my backup, with an empty (unpartitioned) drive, or with it partitioned and formatted- same results each time.

I should have been more exhaustively methodical in this process- I spent nearly three days, but didn’t document every step in detail.  But to be honest, I was flabbergasted by the failures.  I kept thinking that there must be something obvious I was doing wrong.  But in the end, there was really only one conclusion: the Asus M2R32-MVP motherboard has pathetically bad RAID/AHCI support, at least in conjunction with Vista.  It’s so bad, in fact, that after nearly a decade of using Asus motherboards, I’m pretty sure I’ll try a different brand next time.  Or maybe I’ll switch to (shudder) Intel/Via/NVidia, since my other Asus MB-based systems seem to be working fine…and none of them are using the ATI chipset.

I’m back to my original configuration with the Western Digital drives.  I still can’t put the system in standby.  I’m keeping the new Seagate drives on the shelf for the future rebuild of my Linux server. 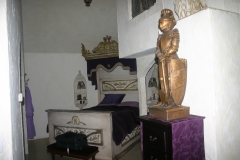