Our cat, Rommel, has had a rather checkered past when it comes to his own health.  He entered our house as a basically healthy twelve week old kitten nearly twelve years ago.  Within a few months he had fractured his kneecap (resulting in six weeks in a cast), and within a year he’d had several abscesses, various stitches added and removed, and numerous x-rays.  In more recent years he’s developed a growth in his mouth called a stomatitis, for which he has had several surgeries, regular steroidal treatments, special hypoallergenic food, and periodic doses of anti-biotics.

Irene noticed a couple of weeks ago that he seemed to be losing weight rapidly, and the stomatitis had re-blossomed.  Having a big sore in your mouth, scale wise about the equivalent of having a thumb stuck between your teeth, probably doesn’t have a positive effect on a cat’s appetite.  But when the vet checked him out we found he’d lost nearly two pounds in three months.  Blood tests showed the cause…Rommel is now diabetic.

Steroid treatments can, apparently, induce diabetes, possibly pushing a borderline cat over the threshold.  Rommel may possibly go into “remission” at some point in the future, but for now we are starting him on twice-daily insulin injections.  If he tolerates the regular injections well it’s not a big deal: but if it becomes terribly stressful for him and us…well, there has to be some kind of measure of quality of life.  I’m optimistic, based on how he handled the shot at the vet, that Rommel will deal with the process well.

I was really hoping that Rommel’s health would settle down, but he seems prone to all sorts of challenges.  I love the guy…despite or perhaps because of his prickly personality.

One thought on “Rommel develops another new ailment…” 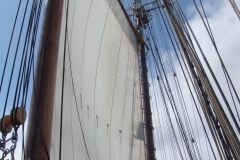