I mentioned in one of my gallery photo entries that I sometimes take pictures of ships so I can research them later on. Actually, this is something I can’t really call a “passion” or a “hobby”: I’ve checked into ship backgrounds a couple of times, and found it kind of interesting.

The first time I did this, I didn’t have a photo to work from. My wife and I were staying downtown at the Fairmont Waterfront one night as a special treat. Right outside the front door of the hotel is the Canada Place cruise terminal, and docked next to it was an unusual looking ship with what looked to me to be some sort of robotic submarine on its deck. The ship also had a Christmas tree on its deck, and that also intrigued me. I tried to memorize its name…Maersk something. Maybe Maersk Defender?

How does a fragmented name turn into real information on the ship? Read on…

Like a lot of things these days, the answer lies with Google. I started with the name, Maersk. A google search with nothing more than that word showed me that Maersk is the name of a large shipping company. A bit more digging, typing the words “Maersk fleet” into google, got me this page. I then poked around through the categories at the top of this particular page. I spent about 20 minutes here, and found under the “Supply category” a ship that looked a lot like (maybe identical to) the one I saw- the Maersk Defender.

But that wasn’t where it ended. Now I had the entire ship name and typed that into Google- Maersk Defender. That led me to a page that gave me nearly the final confirmation that this was the ship I saw– the mention of Alcatel. The submersible thingy on the ship I saw had been labelled “Alcatel” something. It also told me exactly what the ship was used for, and gave me some pretty clear hints as to what the robotic submersible would likely be used for. A couple more clicks on the site, and eureka! There was the submersible I saw, complete with the Alcatel label just as I recalled seeing it. Suddenly a mystery (what was this strange ship for? Was the thing that looked like a submersible robot actually exactly that? And what was its purpose?) was solved. And getting the answers was sort of a fun experience.

Along the way, I also found the website of a guy who worked on board the Defender, a site with some history information on the transatlantic cable networks (including mention of the Defender), a government of Canada website showing vessel position data and port information for the Pacific region (which shows that the Defender is, as of today, still at Canada Place), a state of California document (PDF- complete with Arnold Schwarzenegger in the title line) showing that the Maersk Defender is on contract with something called the NRC for oil spill response, and a bunch of other stuff

What started out as a simple question (“what is this unusual ship?”) branched into all sorts of intriguing little factoids. My mind felt expanded. This happens a lot when I do start doing some google searching, and this sense of continuous discovery is probably why I love the Internet so much. Naturally, the Internet is like all of society- full of its dark and evil places. But its so rich in knowledge that I can’t help but feel its strengths outweigh its potential downsides. 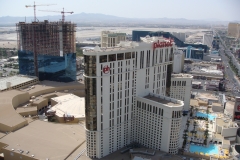