Our cat Sasha died Wednesday just after 11:00 pm. It was pretty sudden- she was fine Wednesday morning, a little off around dinner time, and in shock by bedtime. We rushed her to the emergency vet, but they couldn’t save her. It looks like she was sick and respirated some vomit, and this was complicated by her heart and kidney problems.

Sasha came into our life as something of a lost soul…

We were at the SPCA to adopt one cat about twelve years ago. Tuxedo won my heart that day, but he was a kitten- cute and lively, and sure to have been adopted by someone if we hadn’t taken him. Sasha sat quietly in the back of her cage, looking strange with a mother’s teats still clearly visible in an emaciated frame. She was neither cute nor energetic, and I suspect she would have had a hard time finding a home.

She had been brought to the shelter as a mother with kittens, barely past being a kitten herself. A year old, they told us, and they had to separate her from her kittens because she was so thin yet still trying to feed her brood. Irene drew me back to her and convinced me that one more cat could fit in our house. And so both Sasha and Tux came home that day.

Sasha discovered food when she came to our house, and food became her fast friend. She’d wake up and go to the food bowl to spend her day, and eat at every opportunity. She became pudgy, so much so that we had to change the feeding arrangements: no more free choice food, which with between six and eight cats meant a lot of meal time shuffling of bowls.

Sasha was never a dominant cat. She was always the target of bullying by our other cats, and at times we had to separate her from the worst of the ruffians so that she could have some peace. For a while before we moved to the coast, she lived in isolation. But when we came to our new home in British Columbia, Sasha established “her” space, and was able to go wherever she wanted…on the main floor of the house. Upstairs was “off limits”- some sort of catty agreement was in place, one which seemed to work out for all involved. This new peace lasted for nearly four years.

However, good things never seem to last. Sasha started to develop strange health problems a little over a year ago. Her weight plummeted. and with it her ability to maintain a balance of power in the Catocracy dived as well. She took to hiding again, and eventually her weight loss became alarming.

The vet diagnosed hyperthyroidism, accompanied with a gradually enlarging heart. Her rest heart rate was elevated as a result. Thyroid medicine helped, but even the slightest upset would send her cowering under a bed and turn her off what little food she did eat. She started vomiting regularly, and finally we resorted to putting her in isolation. We set aside a room in the house for Sasha alone. The closed door became a constant irritant for several of our cats, but Sasha seemed to take to the safety of her new space. She stopped throwing up, and started putting on weight again. Not much, but she went from perhaps 5 pounds back up to around 7 or so.

And more importantly, Sasha was happy and at ease. Irene spent several hours each night with her, starting her sleep in Sasha’s room before coming back to the master bedroom. I visited Sasha in her room briefly each day, and found her more than willing to purr and relax on my chest.

This last phase of Sasha’s time with us lasted until yesterday. Irene found her after work hiding in the corner of her room, with signs that she had thrown up once or twice during the day. This wasn’t normal, but it wasn’t terribly abnormal either- Sasha had often had her “off” days in the past few months. Irene checked again when we were going to sleep- Sasha’s “off” day had turned into a full fledged emergency. She was curled in the corner in obvious distress- struggling to breathe, her heart racing, eyes glassy and not clearly able to pay attention to Irene or me: shocky.

The emergency vet tried to stabilize her, but it wasn’t possible. A few minutes after we got her to the vet, at about 11:00 pm, Sasha stopped breathing on her own, although her heart was still racing at well over 200 beats per minute The vet and technician continued to artificially respirate Sasha for several minutes, but it was apparent she was no longer responsive.

Sasha’s heart was enlarged, and her kidneys were mostly shut down. Apparently that’s not unusual with hyperthyroid conditions. That put her in a delicate state- what exactly pushed her beyond her ability to recover is unclear. She was 13, which is not old for a cat.

The first picture in this post is of Sasha in her “prime”: about three years ago. Below is one of the last two pictures I took of her, taken August 9th of this year. 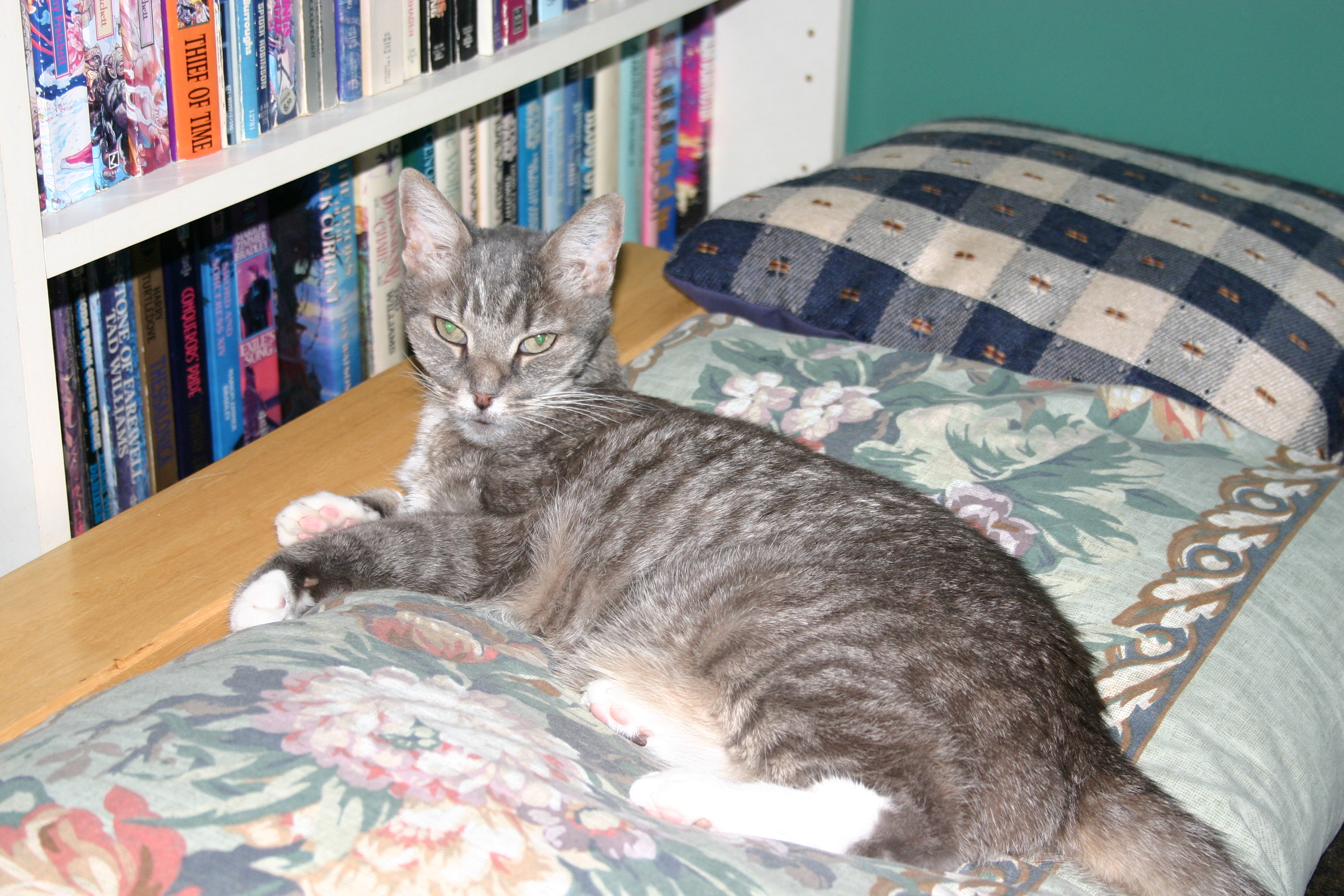